Captain-General is the senior rank granted to the Chief Custodian, the senior-most member of the Emperor of Mankind's elite personal guard known as the Adeptus Custodes. The Captain-General personally oversees the select inner corps of three hundred Custodians, known as the Companions, who actually serve the Emperor as His personal bodyguards within the sacred chambers of the Sanctum Sanctorum, the Throneroom where the ancient prosthetic device known as the Golden Throne contains the withered corpse of the God-Emperor Himself.

As the highest authority within the Adeptus Custodes, it is up to the Captain-General's discretion who may be allowed access to the Emperor. He also oversees the security of the Imperial Palace. Performing such sacred and important roles, the Captain-General is considered a very influential figure and serves as an important member of the Senatorum Imperialis.

An ancient Remembrancer's sketch from Carpinius' Speculum Historiale, depicting Constantin Valdor, the Captain-General and Chief Custodian of the Legio Custodes as he appeared during the Great Crusade era

Constantin Valdor, the Captain-General and Chief Custodian of the Legio Custodes in battle during the Horus Heresy 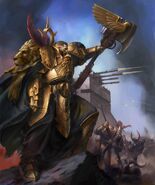 Trajann Valoris, the current Chief Custodian and 17th Captain-General of the Adeptus Custodes, leads the defence of the Imperial Palace during the Second Battle of Terra against the daemonic hordes of Khorne.
Add a photo to this gallery
Retrieved from "https://warhammer40k.fandom.com/wiki/Captain-General?oldid=319131"
Community content is available under CC-BY-SA unless otherwise noted.