A Capitol Imperialis is a super-heavy tracked vehicle often used by the Astra Militarum as a mobile command base for the deployment and organisation of multiple regiments. The vehicle is heavily armoured and is protected by multiple Void Shields due its sheer size and slow speed, that of a brisk walk, which limits the vehicle to defensive roles during combat. The Capitol Imperialis is used by the Imperial Guard in large campaigns where multiple regiments, and possibly other Imperial factions such as the Adeptus Astartes and Adeptus Mechanicus, will be working cooperatively. The Capitol Imperialis allows a campaign's commanders to meet in a secure place that can move along with the front line. The vehicle is designed as a mobile command post and base of operations, but its heavy armour and weapons loadout ensure that if engaged in combat, the Capitol Imperialis is capable of holding its own.

The Capitol Imperialis is a massive vehicle that stands nearly fifty metres tall and eighty metres long, rivaling some Imperial Titans in size. The machine's outer hull is plated in solid adamantium and the vehicle is outfitted with six Void Shield generators for extra protection. Within its massive hold, a Capitol Imperialis can carry up to two full companies of Imperial Guard infantry, one hundred men and accompanying battle tanks – while a host of Adeptus Mechanicus tech-priests, adepts and servitors tend the massive Behemoth Cannon and hundreds of secondary weapons. This allows the vehicle to act as a mobile bunker for troops, especially on inhospitable worlds, and the embarked Guardsmen can further support the Capitol Imperialis by fighting from its protective bulk. The command chamber is situated deep within the vehicle and gives the regiment's commander the tools needed to command his troops effectively. The command chamber is a broad room twenty by thirty metres, and is dominated by a massive glowing hololith display at its center. A line of communications panels manned by servitors and adjutants lit one wall, while the opposite bulkhead was filled with a live-feed visual display from the transport’s scanners and the planetary strategic network. The chamber also includes Vox-gear, pict-casters, logic-engines, and other less advanced pieces of Imperial technology. The bridge crew mostly consists of hooded Servitors and adjutants that gather, analyze, and display information to allow the Imperial commanders to carry out their campaign.

The Capitol Imperialis is armed with a wide variety of powerful weapons that allow the vehicle to hold its own against even the most impossible odds. The vehicle's main weapon is a massive Macrocannon known as a Behemoth Cannon. The Behemoth Cannon is supposedly large enough that four Leman Russ Battle Tanks are capable of fitting in its barrel. The concussive force of firing the weapon can knock nearby troops off their feet and cause avalanches and rock slides. A direct hit from this weapon is capable of killing thousands of enemy soldiers or vehicles, and the impact of its rounds can throw even armoured vehicles hundreds of metres into the air while producing a massive mushroom cloud. Secondary hull-mounted weapons include twin-linked Heavy Bolters for close-in defensive fire, and the outer hull can be electrically charged to repel boarders.

During the Horus Heresy elements of the Raven Guard Legion, under the command of Branne Nev and the Imperial Army's Therion Cohort led an invasion of a Traitor controlled world the name of which has long been forgotten. The planet's second capital city of Milvian was assaulted in force by the Therion Cohort, led by brothers Marcus Valerius and Antonius Valerius, in which both brothers led their battle groups with their own Capital Imperialis. During the battle Marcus' Capital Imperialis took on an enemy Warlord-class Titan, and despite a Warp Missile detonating within the transport's Void Shields the mighty vehicle was able to continue fighting to the end of the campaign and further into the Horus Heresy.

When a tendril of Hive Fleet Leviathan threatened the world of Tarsis Ultra, one of the Imperial Guard regiments sent to defend the planet against the Tyranids was the 10th Logres Regiment, led by Colonel Octavius Rabelaq. Colonel Rabelaq commanded the 10th from a Capitol Imperialis, which took part in the defence of Erebus, the capital city of the world. The vehicle was stationed behind the trench lines protecting the city, and the massive war machine destroyed a large number of Tyranid bioforms with its many weapons. However, when the line was threatened with being completely overrun during by a heavy Tyranid attack, Colonel Rabelaq charged his vehicle deep into the enemy ranks.

While his act of heroism saved the defending regiment from destruction, Colonel Rabelaq found himself trapped as the Tyranids threw themselves into the vehicle's tracks, completely immobilising it. While the vehicle was immobilised, a Bio-Titan attacked and the creature was severely wounded by a direct hit from the vehicle's Macrocannon. However, the Bio-Titan's regenerative abilities healed it of most of its injuries, and before another shell could be loaded into the Macrocannon, the Bio-Titan slammed into the Capitol Imperialis, knocking the war machine on its side. As the Bio-Titan ripped into the vehicle, the colonel gave the order for the city's defensive cannons to fire on his vehicle. The resulting explosion vaporised everything within 500 metres and created a large, deep crater, the only sign of Colonel Rabelaq's sacrifice.

During the invasion of the Realm of Ultramar by the Forces of Chaos led by M'kar the Reborn in 854.999.M41, another Capitol Imperialis, the Lex Tredecim, formed part of the Ultramarines and Imperial Guard's muster on the world of Calth, and later took part in the defence of the planet. During this time, Ultramarines Sergeant Learchus Abantes, who himself had never visited Calth before, believed that the vehicle was far too large to enter the planet's underground system of subterranean hive cities, but Captain Uriel Ventris explained that Calth's caverns were so large that the vehicle could move freely.

The technical specifications of the Capitol Imperialis have yet to be released by the Adeptus Mechanicus.

The following is a list of notable Capital Imperialis command vehicles:

The Capitol Imperialis is often confused with the Leviathan super heavy transport. Due to the lack of available sources or clarification from Games Workshop on the matter, the two vehicles will be treated separately. 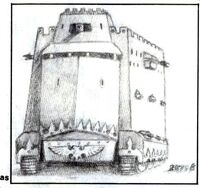 Front view of a Capitol Imperialis

A Capitol Imperialis on the battlefield