"Pray that night is upon us, for if this twilight is the work of the Necrons, we are all dead men."

A Canoptek Wraith is an automated robotic Necron construct that serves as the eyes and ears of the central operating system of any Tomb World, patrolling for intruders and inspecting the Necron sanctuary's ancient systems for signs of damage and decay. Its primary tool is its Phase Shifter, a Dimensional Destabilisation Matrix that allows a Wraith to phase in and out of sync with the normal space-time continuum.

Though the primary purpose of this device is to allow a Canoptek Wraith to reach into and repair solid machinery, it is equally effective when used to deal with intruders who have breached the protections of a subterranean Necron stasis facility. In such a case, a Canoptek Wraith can phase its claws and tendrils inside an opponent, and resolidify them to sever arteries, nerve clusters and other vital pathways without leaving an external mark of what caused the victim's death.

While a Necron Tomb World slumbers fitfully in eternal stasis, the Necron constructs known as Canoptek Wraiths serve as its eyes and ears. They flit silently through the dusty halls of the Necron installation, patrolling for intruders and inspecting the ancient systems for damage and decay. Canoptek Wraiths are primarily probe mechanoids, programmed to report back to their Canoptek Spyder controllers via an interstitial interface rather than act under their own direction. When orders are received, a Canoptek Wraith carries them out with the unfaltering resolve of the machine. Whether it is commanded to strike against an intruder, or conduct repairs in the heart of an eons-old collapsing tomb, the Wraith will follow its instructions until its task is completed or it is destroyed.

A Canoptek Wraith's most notable feature is its Phase Shifter -- a Dimensional Destabilisation Matrix that allows it to skip in and out of phase with the normal space-time continuum. By adjusting the modulation of a Phase Shifter's matrix, a Canoptek Wraith can even keep portions of its physical form in different phase states simultaneously. Whilst a completely phased-out existence can be sustained by the construct almost indefinitely, a half-phased state requires an enormous amount of energy to sustain. In fact, a Canoptek Wraith's body is little more than a series of interlocking power generators and etherium lode conduits, and yet even with so much potential power available to it, the construct can exist in a dual phase state for only limited periods of time.

The Phase Shifter was originally created to allow the Wraiths to reach into and repair solid machinery without having to go to all the trouble of removing its outer casing and other superfluous components. However, a Wraith's abilities are no less valuable when dealing with intruders. If it times its attack correctly, a Canoptek Wraith can phase its claws and tendrils inside an opponent, swiftly resolidifying them to sever arteries, nerve clusters and other vital pathways without leaving an external mark of what killed the victim. In addition, the enemy must time his own return blows with perfect precision, lest his own weapons pass through the Wraith's phased-out form. Phase Shifters also allow Wraiths to move effortlessly at speed through terrain that normal scouts would find difficult or dangerous to navigate, thus ensuring that no obstacle can stop a Wraith from moving into position before a battle.

Though their primary function is to watch over their sleeping masters, Wraiths are often drafted into Necron armies to serve as advance scouts. Their Phase Shifter allows a Wraith to traverse all manner of terrain without pause, and can also keep the construct hidden from enemy eyes and sensors when it is fully phased out of synchronisation with the space-time continuum. Many an enemy force has advanced across the surface of a seemingly barren Tomb World, completely unaware that its every move is being watched, recorded and reported by a Canoptek Wraith. Only the most observant of foes can hope to catch a glimpse of the lurking Wraith's spectral form or detect the unsettling electronic chatter that accompanies its precise Vox transmissions. Even then, such sightings are commonly dismissed as simply flights of fancy or imagination incurred by the unsettling nature of a Tomb World.

Once the inevitable battle begins, Canoptek Wraith are most commonly tasked with sowing terror and disorder throughout the foe's ranks by striking at commanders, support troops and supply lines -- any target that a more conventional strike force would struggle to reach. Many an enemy commander fighting against the Necrons never even makes it to the battle, having been slain the night before in his bed by the cold claws of a Canoptek Wraith, for whom doors, guards and force fields are no barrier.

The term "canoptek" is a play on the word "canoptic", an adjective used to refer to an ancient Egyptian vase, urn, or jar, often known as a canoptic jar, that is used to hold the viscera of an embalmed body. The Necrons' flavour has been heavily reworked in the 5th Edition to be even more evocative of ancient Egyptian cultural references. 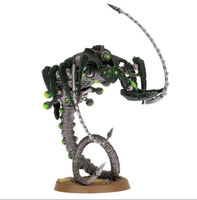 A Canoptek Wraith armed with a Whip Coil 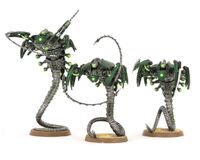 A squad of Canoptek Wraiths