Canoptek Spyders are massive robotic Necron constructs, their immense weight effortlessly propelled by sophisticated anti-gravitic engines. Their bodies are large and rounded in the shape of a hooded carapace, in order to accommodate the internal systems that construct Canoptek Scarabs as needed.

This is combined with their multiple limbs and many compound visual sensors which stare out from a featureless, metallic block to give an arachnoid aspect that enhances the fearful appearance of these monstrous robots.

All Canoptek Spyders have a Fabricator Claw Array that allows them to effect repairs on a Necron tomb's systems, and these also make for frighteningly destructive weapons. Canoptek Spyders also sometimes sport additional weaponry to better repel crypt intruders.

When the Necrons rise from their crypts, Canoptek Spyders often follow them in battle, both for their combat abilities and their capability for repairing damage that is beyond even the abilities of their Necron masters' advanced regenerative systems.

Unlike their Necron masters, Canoptek Spyders never sleep, but wile away the aeons servicing the structures of their Tomb World, guarding their slumbering superiors and maintaining the complex stasis machines that house them.

Even in their prime, these systems required constantly looped maintenance cycles lest they degraded beyond repair, and the withering centuries have only hastened this natural decay.

Though Canoptek Spyders are essentially just automated robotic drones, a Canoptek Spyder is still a formidable foe when the situation demands it. Canoptek Spyders move about by anti-gravitic propulsion, albeit more ponderously than the agile skimmer bodies that Necron Destroyers possess.

Their vast arrays of self-repair and backup systems, vital for enduring the uncaring millennia, offer substantial protection against a foe's weaponry. In return, any enemy foolish enough to stray within reach of a Canoptek Spyder will have their flesh scoured from their bones by an array of mechanical tools and pincers.

As if this were not enough, each Canoptek Spyder will have a further selection of weaponry at its command, depending on its specific function.

Canoptek Spyders whose primary duties are oversight, rather than direct action, will craft slaved hosts of Canoptek Scarabs and Nanoscarabs within their abdomens, which are unleashed to effect repairs on nearby Necrons or consume enemies, weapons and armour.

Others employ particle beam dissectors in place of claws and act as sentinels for the slumbering tomb. Whatever the armament, all Canoptek Spyders are programmed to never fall back and will always fight to protect their masters -- even in the face of their own destruction.

Once a Tomb World has awoken, Canoptek Spyders may accompany their masters on raids and campaigns of conquest. Not only are they deadly combatants, but their Fabricator Arrays make the already resilient Necrons all but indestructible.

Whilst Canoptek Spyders are not sentient by any strict definition, their complex and layered sub-routines are incredibly resilient and can adapt to most situations.

If a triad of Canoptek Spyders are operating in concert, one takes overall command, harnessing the processing capacity of the others to create a gestalt super-mind far greater than the sum of its parts.

This hyper-efficiency is passed onto all Canoptek Wraiths and Canoptek Scarabs in the immediate vicinity, allowing the Canoptek Spyders to coordinate an extremely well-coordinated and precise response to any threat, be it a failed stasis-matrix or an enemy incursion.

So it is that any intruders to a Necron tomb are often slain before catching so much as a glimpse of a Necron, having already been overwhelmed by swarms of Canoptek Scarabs and Canoptek Wraiths silently directed by a looming Canoptek Spyder; thus ensuring the safety of their slumbering masters.

Canoptek Spyders also act as mobile Canoptek Scarab hives, and can expend energy to create a Canoptek Scarab swarm. However, when doing so there is a chance that the Spyder will drain excess energy in the production of a swarm and take some form of damage to its internal systems.

Produced Scarabs will usually be sent to affect repairs under the direction of their Spyder master, or to repel enemies that threaten their Necron masters.

A Canoptek Spyder can be found equipped with any of the following:

The term "canoptek" is a play on the word "canoptic", an adjective used to refer to an ancient Egyptian vase, urn, or jar, often known as a canoptic jar, that is used to hold the viscera of an embalmed body.

The Necrons' flavour was heavily reworked in the 5th Edition to be even more evocative of ancient Egyptian cultural references.

Dorsal view of a Canoptek Spyder.

Ventral view of a Canoptek Spyder.

A Canoptek Spyder of a variant design. 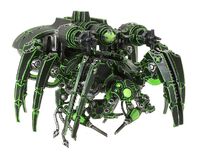 A Canoptek Spyder armed with a twin-linked Particle Beamer and a single Gloom Prism.

Side and top views of a Canoptek Spyder.
Español
Community content is available under CC-BY-SA unless otherwise noted.
Advertisement