"Take my advice, if you hear the chittering of Scarab wings, just run, and keep running ‘til the sound is gone. Don’t stop, and don’t look back. If one of your squad mates starts screaming, it’s because the Scarabs are on him, and you’ll die right alongside if you try to help. I’m not saying you’ll be able to outrun the devils mind. Even goin' full pelt and with a head start, you’ll lose ground pretty quickly. Best you can hope for is that you can run faster than the rest of your squad: but then no one ever said life in the Imperial Guard was fair. "

A Canoptek Scarab is a small, silver, beetle-like Necron construct. These robotic scarabs are the most numerous and diverse of the Necrons' Canoptek machine servants. They are designed to break down organic and non-organic matter into raw energy, which can then be woven into fresh construct forms at the direction of the scarabs' controller.

Essentially mindless feeding and replication machines of various sizes and functions, their swift, darting movements and their high-pitched chittering mimic in form and behaviour organic invertebrates of a similar role but, directed by the will of a Cryptek or slaved to the more complex artificial intelligence of a Canoptek Spyder, they are capable of staggering feats of construction and destruction.

It is for this latter function they are used by the Necron Lords as weapons of war -- an all-devouring tide of skittering metal launched ahead of a Necron phalanx that can break down tanks and fortifications and force an enemy to expend its firepower in frantic efforts to halt the onslaughts.

However, Canoptek Scarabs lack a true hive mind. A swarm of scarabs has no more true intelligence than one scarab alone -- which is to say none at all. All they are driven by are simple instructions and even simpler instincts.

Nevertheless, their highly sophisticated auto-routines and construct-patterns allow them to build Necron weapons and vehicles of immense power in a surprisingly brief time. Canoptek Scarabs are fearsome enemies in swarms due to their horrifying nature as mindless feeding machines.

The slight humming sound produced by this anti-gravitic motor is amplified a thousandfold in large scarab swarms, producing a deafening, droning buzz like a plague of locusts, which can have a terrifying effect for the Necrons' enemies.

In the confines of a Necron tomb, Canoptek Scarabs patrol in great swarms, seeking both systems in need of repair and intruders in need of termination. They will often busy themselves stripping down destroyed or damaged components which can then be remade as replacement parts, or else as further Canoptek Spyders, Canoptek Wraiths or scarabs to oversee and manage the tomb's functions.

Scarabs possess the terrifying ability to consume nearly any material, living or dead, natural or artificial, and convert this matter to energy for storage and later use. Almost any piece of Necrontyr technology can be replicated in this fashion, providing that the wellspring of energy is sufficient for the task at hand.

Given time, suitably large swarms of scarabs can consume an entire hive city, and all its inhabitants; thereafter using the purloined energies to create anything from a Necron battlefleet or another fully functioning Necron tomb ready for habitation. As such, Canoptek Scarabs are capable of fabricating nearly anything known to Necron science.

Essentially mindless feeding machines, Canoptek Scarabs are typically controlled by interstitial carrier waves from Canoptek Spyders or Wraiths. If this signal becomes disrupted or jammed, Canoptek Scarabs simply revert to their most basic instincts and devour anything in their immediate vicinity -- even other scarabs or the Necrons themselves.

However, the interstitial interfaces are incredibly difficult to detect by most other forms of technology, let alone disrupt. Should the controlling entity be destroyed, another automatically assumes control within moments. Even if the enemy can completely remove the carrier waves, this often creates a far greater problem than before.

The Canoptek Scarabs will no longer operate under the Necrons' direct control: as part of their reversion to basic programming, they will expend any accumulated energy on fashioning even more scarabs; thus creating a voracious self-replicating swarm that only something of the order of a saturation bombardment has any hope of exterminating.

It is of note though that scarab swarms possess the ability to both burrow and fly efficiently, not only allowing them to avoid enemy fire better but to also be able to strike the enemy from an unexpected direction in a surprise ambush. In addition to often overwhelming their opponents in this way, Canoptek Scarabs also have a nasty habit of "eating" weapons, even as they slice through the swarm.

Whilst individually, Canoptek Scarabs pose little threat, given enough time, an unmolested scarab could inflict great damage. However its rate of consumption is relatively slow, affording ample time for it to be destroyed.

Scarabs' machine nature gives them a degree of resistance to damage, but they lack the real armour or the self-repair Reanimation Protocols employed by the Necrons themselves. Nevertheless, scarabs are almost never encountered alone, and the presence of a single Canoptek Scarab signals that dozens, if not hundreds more are close.

A Necron Overlord will often begin a battle by unleashing a swarm of Canoptek Scarabs that is so thick it can blot out the sun, hoping that the foe will waste much-needed ammunition blasting the scavengers apart before the true assault is launched. Indeed, a particularly canny Overlord can determine the resolve of various enemy formations by how they react to such an opening gambit.

Hardened troops will see the scarabs as the slight threat they are, destroying or driving them off with disciplined volleys of firepower. Other enemies will be driven mad with fear by the pervasive drone of the swarm's wings and the sight of the moving carpet of death, or even overwhelmed and devoured by the chittering tide.

Either way, an observant Overlord can glean valuable information as to where the strongest pockets of resistance lie and plan his attack accordingly.

However, where Canoptek Scarabs truly come into their own is when they are unleashed upon enemy tanks and other vehicles. Once a scarab has latched onto a hull, it begins to feed, breaking down the victim vehicle's armour plating into wisps of energy and leaving it vulnerable to attacks from other sources.

If not quickly destroyed or driven away -- if such a thing is at all possible due to their overriding program to never fall back -- a swarm of Canoptek Scarabs can even burrow their way through the hull using their entropic abilities; turning the mighty engine of war into a horror-filled prison for its soon-to-be devoured crew.

Canoptek Spyders are able to act as scarab hives, as they can produce hosts of Canoptek Scarab and Nanoscarab swarms within their abdomens. These scarabs are often then sent to effect repairs upon nearby Necrons, or directed to consume enemies, their weapons and their armour.

The term "canoptek" is a play on the word "canopic", an adjective used to refer to an ancient Egyptian vase, urn, or jar, often known as a canopic jar, that is used to hold the viscera of an embalmed body.

The Necrons' flavour has been heavily reworked in the 5th Edition to be even more evocative of ancient Egyptian cultural references. 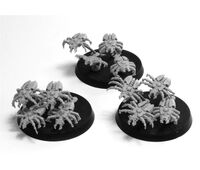 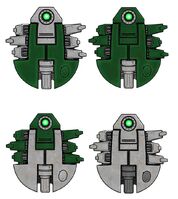