A Canoptek Acanthrite is an autonomous Necron war construct which resembles a monstrous, artificial insect enfolded in shadowed wings of tenebrous force that propel it through the skies. Canoptek Acanthrites are often encountered in the vanguard of Necron assault spearheads and extermination campaigns. When deployed, their numbers vary from a mere handful to vast hosts of these abhorrent machine-locusts, capable of stripping a city down to rubble and slaughtering its inhabitants in a merciless tide of destruction.

Although the Imperium of Man had received unconfirmed reports of these constructs elsewhere, it was during the Orphean War of the late 41st Millennium in the Orpheus Sector of the Segmentum Tempestus that Imperial forces first bore witness to widespread deployment of these highly distinctive and unique war machines. Capable of extended periods of rapid sustained flight through the use of anti-gravitic emitters, the Canoptek Acanthrite operates with its fellows in a manner analogous to predatory insect swarms.

These large, buzzing robots' principal armament is a short range and highly powerful thermic Cutting Beam which they use for the destruction of armoured vehicles and troops as well as the systematic and rapid dismemberment of bunkers and fortifications. This armament, in combination with their size and speed, has led to the Acanthrite being classified as a primary threat target by Imperial tacticians. On the battlefield, Canoptek Acanthrites will often be found moving stealthily through the air before launching aerial attacks that slice apart armoured vehicles with their cutting beams. They then descend to the ground to smash and hack apart any survivors with their bladed limbs and energy-wreathed stingers.

The analysts of the Inquisition's Ordo Xenos have not yet determined the technical specifications of the recently encountered Canoptek Acanthrite.

The term "canoptek" is a play on the word "canopic", an adjective used to refer to an ancient Egyptian vase, urn, or jar, often known as a canopic jar, that is used to hold the viscera of an embalmed body. The Necrons' flavour was heavily reworked from the 5th Edition onwards to be even more evocative of ancient Egyptian cultural references. 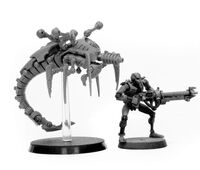 Size comparison of a Canoptek Acanthrite and a Necron Warrior 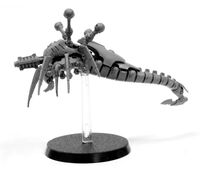 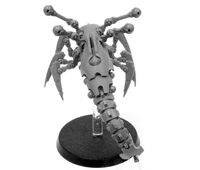 A close-up view of the Ordo Xenos' schematic of a Canoptek Acanthrite
Español
Community content is available under CC-BY-SA unless otherwise noted.
Advertisement