Camouflage Netting, also commonly called Camo Netting, is a common upgrade used on many Imperial Guard vehicles, including those deployed by the Ordo Tempestus and even the Lost and the Damned. Camouflage Netting is a rather crude and simple technology, consisting only of fabric webbing coloured to match the local environment and usually woven with local flora. A rarer version is composed of sheets of cloth covered in Cameleoline, a refractive chemical substance that can blend its colouration into the surrounding area.

Whether the netting is made with rare Cameleoline or cruder materials, Camo Netting helps conceal a vehicle from prying eyes.The netting is often rolled up when the vehicle is not in use, and upon arriving at a combat zone the netting is put into use. If a vehicle is expected to stay in a single location for a prolonged period of time, such as during a siege or waiting to ambush an enemy, the Camouflage Netting might instead be draped over the entire vehicle, using nearby trees, rocks or other environmental cues to conceal the vehicle. Camouflage Netting is especially efficient at providing concealment from enemy aircraft. Netting can also be draped over structures, such as Turret Emplacements or bunkers.

The following are known xenos technologies that mimic the most superior forms of Imperial Camouflage Netting: 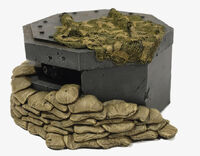 Camouflage Netting draped over an Imperial Guard Pillbox Bunker
Add a photo to this gallery
Retrieved from "https://warhammer40k.fandom.com/wiki/Camouflage_Netting?oldid=288388"
Community content is available under CC-BY-SA unless otherwise noted.