"To assume the shape of the accursed and deliver death from the purity within you - that is to be Callidus."

The all-female Assassins of the Officio Assassinorum's Callidus Temple are the most subtle of the Imperium of Man's secret operatives, specialising in deceit and the use of artful deception to accomplish their objectives, usually assisted in their bloody tasks by the shape-changing Polymorphine drug.

The Callidus Temple's devotion to cunning and subtlety is often used on those missions where overt interference by the Imperium in a situation would upset the intricate balance of power maintained by the High Lords of Terra.

A Callidus Assassin is the ultimate weapon against those over-ambitious Imperial officials that would make a mockery of the Emperor of Mankind's justice whilst appearing to do no wrong. Those Imperial or planetary officials that use diplomacy, bribes and corruption to further their positions play a dangerous game within the corridors of powers.

Like all of the other temples of the Officio Assassinorum, the Callidus Temple was originally founded on Terra in the late 30th Millennium as the Callidus Clade during the Great Crusade at the direction of the first Grand Master of Assassins, Malcador the Sigillite. Malcador and the six men and women who would serve as the first Directors Primus of the Officio Assassinorum's founding clades had all sworn an oath at Mount Vengeance to eliminate the enemies of the Emperor of Mankind by any means necessary.

One of these Directors Primus, whose identities were all kept hidden, even from each other, was known as Sire Callidus and she was the founder of what became the Callidus Temple. The headquarters or temple of the Callidus Clade was established somewhere on Terra, where it is still located today.

Later, during the Horus Heresy, the Callidus Clade joined with the other five clades to assemble an unprecedented Execution Force of Officio Assassins intended to slay the renegade Warmaster Horus and bring an early end to the terrible civil war of the Heresy. This effort failed, though the Callidus Temple went on to prove a powerful instrument of Imperial policy in later millennia.

The vast majority of missions undertaken by Callidus Assassins involve infiltrating a Chaos Cult or other heretical organisation in order to kill its leader along with the other key members of the cult. Once the leadership of such a group has been removed, it is easier for the Imperium's regular armed forces to eliminate the cultists, without having to resort to extreme measures such as an Exterminatus order.

However, on less frequent occasions Callidus Assassins are called upon to undertake more exotic assassinations, requiring the use of both Polymorphine and surgical cybernetic implants to allow them to assume the form of a wider range of humanoids.

Although they are not typically fielded with a larger army on the field of battle, Callidus Assassins can be deployed behind enemy lines in order to infiltrate facilities such as bases or encampments and take out enemy leaders or key personnel. This is usually achieved by the assassin killing an isolated patrol or enemy unit and then assuming the form of one of those slain through the use of Polymorphine (also acquiring the armour and wargear of the deceased to complete the disguise).

Callidus Assassins are the most secretive and least understood of the Officio Assassins, as their usefulness would greatly diminish if their capabilities were more widely known. They are usually tasked with their missions on the order of the High Lords of Terra at the request of the Inquisition, especially the Ordo Hereticus, although as stated above, less frequent missions from the other Ordos are also undertaken.

To achieve the exacting tasks assigned to it, the Callidus Temple specialises in the use and development of the shape-altering drug Polymorphine to enable its Assassins to undergo dramatic physical changes, altering their appearance to assume the features of any humanoid (of whatever gender). This then enables the Assassin to infiltrate organisations or enemy bases and eliminate their assigned target with little opposition. The Callidus Temple is highly skilled in such deceptions, and often its work is not detected until the Assassin has already made a clean getaway.

The Callidus Assassins usually impersonate someone in a close position to, or holding influence with, the target. For example, a trusted advisor to a Chaos Lord, or the nursemaid to a child prophecised to cause much pain to the Imperium.

All of the Assassins of the Callidus Temple are trained in the use of Polymorphine. With this specialised drug alone a Callidus Assassin may masquerade as any human being she may choose, from a beautiful young woman to a crippled old man. However, in addition, the Medicus Adepts of the Imperium have developed a range of surgical implants to allow Callidus Assassins to mimic members of alien races, like the Orks and Aeldari.

These implants consist of flex-cartilage and hardened synthskin, similar to that used in the Black Carapace gene-seed organ of the Space Marines. When the Assassin is in their normal form these implants lie dormant under their flesh and within their bones. It is only when Polymorphine is injected that these implants react to the stimulants within the drug and transform into genetically encoded shapes that allow the Assassin to restructure their body into the grotesque and hunched form of an Ork, or the lithe and graceful form of an Aeldari.

Callidus Assassins can impersonate members of humanoid alien species, including the Kroot, Orks and, in at least one legendary case, a Genestealer Hybrid. The implants are often permanent, and restrict the Assassin solely to impersonations of that species. It should be noted that more humanoid species like the Eldar, Dark Eldar, and by inference most likely the Tau can be mimicked without implants through the sole use of Polymorphine.

Over the centuries, the Directors Primus of the Callidus Temple have learnt that the female body and psyche is better able to implement these changes, and by and large female Callidus novitiates make better chameleons than men. As such, almost all Callidus Assassins are actually women, regardless of who they are trying to impersonate.

Callidus Assassins undergo many Terran years of rigorous training to use Polymorphine and become one of the living weapons of the Callidus Temple. As part of its Assassins' training, the Callidus Temple practises innumerable ancient and secret martial arts. These arts train the Assassin in many deadly forms of armed and unarmed combat, against which even a battle-trained foe would be hard-pressed to find a suitable defence.

A Callidus Assassin must move among the enemy as one of them, so the choice of weaponry is always limited and in some cases the Assassin may be forced to fight with their bare hands. Even so, a Callidus Assassin is just as deadly unarmed as when carrying the lethal but easily concealed weaponry preferred by their Temple.

On the battlefield, Callidus Assassins are dropped behind enemy lines, where they use their cunning and skill at deception and stealth to infiltrate the enemy army. Usually this is done by eliminating certain individuals and taking their place.

By disguising themselves with the recently deceased's armour and wargear and using Polymorphine to change the shape of their body and face, the Callidus Assassin can assume the identity of almost anyone in the enemy force. Using this technique, the Callidus Assassin can get close to enemy commanders or powerful psykers, influencing their strategy and finally killing them when the opportunity arises.

The weapons of Callidus Assassins are predominantly close combat or melee weapons, as their deception and infiltration skills and the use of Polymorphine enables them to get very close to their targets before they need to strike. This is assisted by weapons that are small and easily concealed and Digital Weapons are often preferred by these Assassins. Every Callidus Assassin is also a master of multiple forms of unarmed combat and many can kill with a single strike. The following are the most common weapons utilised by the Callidus Temple: 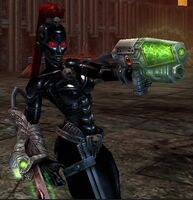 A Callidus Assassin in combat, armed with a Neural Shredder 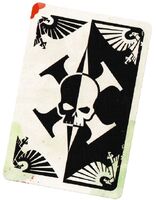