The Butcherhorde is a large warband of Chaos Space Marines comprised of a coalition of multiple World Eaters Traitor Legion warbands. Led by the infamous Khârn the Betrayer, the Butcherhorde was formed originally from the frenzied Khornate Berserkers who followed The Betrayer. Over time, as Khârn has slaughtered his way across the galaxy, the warband has grown to encompass all manner of Khornate devotees. These include ordinary Chaos Space Marines, Chaos Cultists, Daemon Princes, and Daemon Engines.

The Khornate horde known as the Butcherhorde is a ragged and fractious alliance of bloodthirsty lunatics, held together by the unbreakable will of Khârn the Betrayer. During the invasion of the world of Amethal located in the Diamor System, where they fought the valiant Blood Angels Space Marine Chapter, they were separated from the invasion force led by Chaos Lord Xorphas. Khârn's Butcherhorde nonetheless furthered the will of the Black Legion thanks to the machinations of Abaddon the Despoiler. Khârn the Betrayer led his monstrous Butcherhorde to Amethal with but a single goal. He sought to take the heads of the most worthy Blood Angels heroes, to hack their skulls from their necks and place them at the foot of Khorne's great throne.

Khârn had not set out with the intention of forging a vast army of conquest to aid him in his quest. Indeed, to Khârn's mind, those who needed others to fight their battles were weaklings undeserving of victory. Rather, the Betrayer's brutal deeds had spread through reality like ripples upon the surface of a bloody pool. So spectacular was the carnage he wrought, so monstrous the butchery of his passing, that Khorne's faithful were drawn in his wake. At first, Khârn fought alone, then at the head of a warband of Khorne Berserkers.

After slaughtering his way across the Sundered Reach, the Betrayer had found himself the master of a murderous army. By the time he had exterminated all life in the Pandoric Colonies, a whole fleet of spike-prowed warships were his to command, their holds crammed with maniacs, murderers, and hellish war engines. It was not power that Khârn had sought, but neither did he cast it aside. Like any true servant of Khorne, the Betrayer knew a deadly weapon when he saw one. If it was the Blood God's will that he wield that mighty implement of death, then who was he to question it?

So was the Butcherhorde forged, and a terrifying engine of war it was. Great masses of Khorne Berserkers formed its thundering heart, the warriors from dozens of disparate warbands drawn together in the name of unholy murder. Only the overriding will of the Betrayer kept this psychotic horde of killers from ripping each other to pieces, and even then, blood was spilled daily between them. Khârn cared nothing for the lives of his followers, and so did nothing to intercede. So long as they wrought fit slaughter upon the foe when the time came, it mattered nothing to him if the weak were weeded out by the strong in the meantime. Every warrior slain was another skull for Khorne.

Though the Berserkers of Khârn's horde followed him as an avatar of their bloody god's will, many amongst their ranks saw him as both a hated rival and the ultimate skull to claim in order to win Khorne's favour. Such is the way of the Blood God's servants. It was a rare day that the Betrayer did not have to strike down a handful of his own followers as a result of their frenzied attempts on his life. Many more servants of the Blood God followed in Khârn's wake, lending their strength and numbers to the Butcherhorde. Seething masses of Chaos Cultists screamed praise to Khorne as they followed their demigods of slaughter into battle. Looming Daemon Princes led their own bands of followers to war in the Betrayer's name, bringing with them rumbling battle-tanks and deranged Helbrutes that lent the horde heavy firepower.

Most terrifying of all were the massed Daemon Engines of the Butcherhorde. Amongst the packs of prowling Maulerfiends and Defilers towered super-heavy abominations such as the scuttling Brass Scorpions and the Lords of Skulls. Driven by the caged fury of Khorne’s most powerful daemons, these engines of annihilation were nearly as deadly as the Betrayer himself.

Notable Members of the Butcherhorde

The Butcherhorde's colours are typically blood red with gold or brass trim. Those warriors who worship Khorne are anarchic individuals, their armies little more than ragged coalitions of rival warbands ready to turn upon one another at the slightest provocation. Only the leadership of a truly mighty individual can hold such a force together for long. So it was with the Butcherhorde, whose numbers included many former World Eaters fighting alongside dozens of minor cults and reavers.

The Butcherhorde's badge is the distinctive symbol of the former World Eaters Legion which depicts a planet being devoured by a monstrous maw.

A Butcherhorde Khorne Berzerker; note that this is a warrior of the World Eaters, most likely a member of one of the many countless murderous hosts that splintered from the original Legion 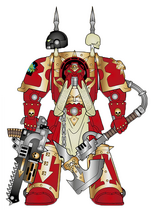 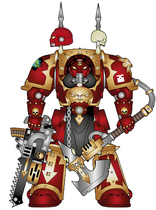 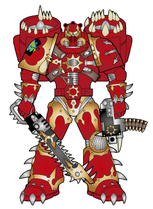 A Butcherhorde Chaos Raptor; this Raptor displays his former Legion's symbol upon his right shoulder pauldron 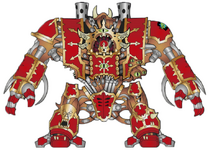 A Butcherhorde Helbrute equipped for savage close combat; its former Legion allegiance is clear from the icon on its shoulder guard, while the eye of the Dark Gods staring from its chest shows that it has the favour of its vile patron
Add a photo to this gallery
Retrieved from "https://warhammer40k.fandom.com/wiki/Butcherhorde?oldid=335142"
Community content is available under CC-BY-SA unless otherwise noted.