A Butcher Cannon is a heavy calibre, rapid-firing rotary gun used by the Forces of Chaos. The Butcher Cannon is commonly found on Chaos combat walkers such as the Decimator Daemon Engine and Chaos Contemptor Pattern Dreadnoughts. The shells fired by the Butcher Cannon are bound with sorcerous Chaos runes of anathema and bloodletting. When used by Chaos walkers, the Butcher Cannon usually features a large blade that is attached beneath the weapon's twin barrels; this allows the walker to engage enemy forces in close combat if they get too close for it to effectively use the weapon at range.

It is not recorded in Imperial records if any other Chaos walkers such as Chaos Dreadnoughts or Helbrutes, Daemon Engines such as Defilers or Soul Grinders, or Chaos Space Marine tanks such as the Predator or Land Raider are able to be armed with a Butcher Cannon, although it is presumed to be possible. 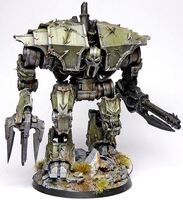 A Chaos Decimator armed with a Butcher Cannon

A Chaos Butcher Cannon
Add a photo to this gallery
Retrieved from "https://warhammer40k.fandom.com/wiki/Butcher_Cannon?oldid=292444"
Community content is available under CC-BY-SA unless otherwise noted.