"Sarge wasn’t so much shot, as he was pulled apart by hundreds of buzzing lights. I didn’t even have time to pray to the Emperor, and there was nothin’ left but his boots."

—Leon ‘Lucky’ Cadmion, after an ambush by a Stealth Team during the Damocles Gulf Crusade

A Burst Cannon is a form of multi-barrelled Tau Pulse Weapon, and utilises the same plasma induction technologies found in a Pulse Rifle to fire micro-pulses of plasma accelerated to near-light speeds. With four rotating barrels to mitigate thermal stress, Burst Cannons are able to sustain ferocious rates of fire, albeit at the expense of the long ranges that many other Pulse Weapons possess. However, this drawback is usually offset by the Burst Cannon’s portability, and the manoeuvrability of units commonly armed with them. The most common Burst Cannon design leaves the weapon’s four barrels exposed to the environment, though certain Tau units make use of Burst Cannons that are fully enclosed with an armoured sheathing.

The Burst Cannon finds use all across the Tau military, although it is primarily mounted on vehicles, Tau Battlesuits, and aircraft. With heavy mountings and large plasma coils powering the weapon, Burst Cannons are a degree more deadly than smaller Pulse Weapons, and are primarily deployed as anti-infantry weapons that can scythe through massed formations, and for heavy suppressive fire; their shots are able to punch straight through most infantry armour as if it was not there. Burst Cannons are also well-suited to combating lightly armoured vehicles, which cannot defend against their powerful hails of high-speed plasma. Combat walkers, armoured transports and recon vehicles that stray within range of a Burst Cannon risk having their thin armour plating torn from them bit by bit. Even many main battle tanks are not immune to the firepower of a Burst Cannon, as a sustained burst directed at the weaker side or rear armour of a vehicle is capable of rupturing an engine or setting off ammunition stores.

Often slaved to Drone controls, a Burst Cannon makes for an ideal point-defence weapon, keeping infantry and light vehicles away from a tank hunter like a Hammerhead, or giving a squad of Fire Warriors cover as they deploy from their Devilfish transport. This is where the Burst Cannon trades the range and accuracy of weapons like the Pulse Rifle for the ability to saturate an area with plasma fire. For this reason, Burst Cannons are used extensively as part of established defences. When guided by Tau Drones, they make effective sentry guns, silently tracking back and forth and scanning for threats.

Enemies of the Tau Empire have developed a healthy respect for Burst Cannons. The weapon makes a distinctive sound when fired, the induction chamber crackling with energy as a stream of charged particles hisses across the battlefield. Imperial Guardsmen that come under fire from Burst Cannons often speak of the sound, each shot cleaving the air with a distinctive whiz-hum, not unlike the sound of solid bullets buzzing past their ear, but multiplied hundredfold as dozens of bursts are fired each second. Unlike the Heavy Bolters and Stubbers of the Imperium with their rhythmic thumping fire, a Burst Cannon makes a continuous tearing wail, with individual shots nearly indistinguishable from each other. 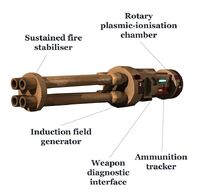 A schematic of a Tau Burst Cannon's primary components 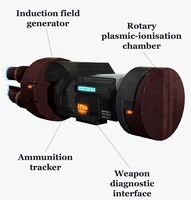 A secondary schematic of a Tau Burst Cannon's primary components

Schematic of a Burst Cannon weapon system designed for use by XV81, XV84 and XV89 Crisis Battlesuits

One of an XV9 Hazard Battlesuit's twin-linked Burst Cannons
Add a photo to this gallery
Retrieved from "https://warhammer40k.fandom.com/wiki/Burst_Cannon?oldid=288481"
Community content is available under CC-BY-SA unless otherwise noted.