A Burna Boy (pl. Burna Boyz) is an Ork who cannot stop setting things on fire. These pyromaniac Orks are dedicated arsonists all, advancing on the foe amid gouts of billowing flame. They love nothing more than burning other peoples' stuff, and the owners too if they can get them. These lunatics will set light to anything or anyone for the simple joy of watching them "do the burny dance". They can prove utterly lethal to tightly packed or lightly armoured infantry, the roiling blasts of their Burnas flushing their victims out of cover amid the sizzle.

Burna Boyz are those pyromaniacal Greenskins whose desire to burn and destroy grows to consume them entirely. Often they join forces with Mekboyz who they depend on to keep them supplied with Promethium fuel and the heavy blow torch/flamethrowers known as Burnas that give them their name. These dedicated arsonists take great delight in setting fire to the enemy (and anybody and anything else they can lay their hands on if no enemy is available) and it takes a strong Warboss or the blackmailing powers of the Meks to keep them in line. However, the benefits of these lunatics in any Ork warband just about outweigh the risks of getting anywhere near them. The Burna Boyz can be a powerful asset on the battlefield, whether in small team or large mobs; their mass incendiary firepower can prove devastating, particularly against enemy infantry, flushing out foes from defended positions and bringing down bestial creatures. Also, with their weapons turned to the searing hot point of a blowtorch flame, they can wield them to hack and slice up enemy armour and vehicles. They serve a vital secondary role in this regard, cutting up battlefield salvage for later use. 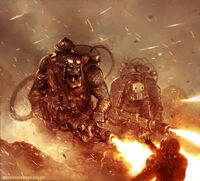 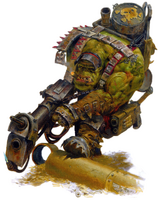 Tuffruk, an Ork Burna Boy who serves in a Big Mek's warband 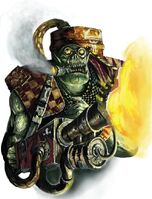 An Ork Burna Boy fires his Burna at the foe 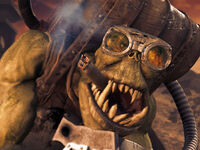 A mob of Ork Burna Boyz advance upon the enemy
Add a photo to this gallery
Retrieved from "https://warhammer40k.fandom.com/wiki/Burna_Boy?oldid=291564"
Community content is available under CC-BY-SA unless otherwise noted.