The Brazen Beasts are an infamous warband of Khorne Daemonkin Chaos Space Marines that prey upon the followers of the other Chaos Gods. They are known for utilising heavily-armoured Daemon Engines to lead their berserker assaults, leaving behind nothing but mangled corpses and blazing devastation.

These roaring, clanking packs of Daemon Engines always lead the charge of the Brazen Beasts. They tear through the enemy like the gouging claws of some almighty monster, leaving behind nothing but mangled corpses and blazing devastation.

Following these metal monsters come the Daemonkin, howling praise to Khorne as they carve the Blood God's rune into the bodies of their victims and consecrate the carnage in his name.

It is not known when the Brazen Beasts were first formed, though they have made a name for themselves. The Brazen Beasts' proclivity for fielding Daemon Engines stems from their worship of the Gorethunder Cohort, which pounds the foe into oblivion with massed batteries of Skull Cannons and rampaging Soul Grinders.

In imitation of their chosen cohort, the Brazen Beasts have assembled a mighty stable of Forgefiends, Maulerfiends, and Defilers. These they transport deep within the bowels of their Space Hulk, the Oblivion Shadow, the machines' needs attended to by a coven of Warpsmiths. Chief amongst these infernal engines is a mighty Lord of Skulls, a towering war-idol that the Brazen Beasts worship as the Caged God. It is the frenzied visions of this abomination that guide the Brazen Beasts through the void, and lead them to fresh victims for the slaughter.

Khorne has been worshipped since the galaxy was young. Knowingly or not, every warrior that ever raised a blade has offered the Blood God praise. Still there are few mortals that have proved as fervent or faithful as the Khorne Daemonkin, whose ten thousand year rampage has seen Khorne presented with tribute like never before.

It is a rare warband that does not contain at least one Daemon Engine, for the lords of the Daemonkin go to great and bloody lengths to secure the service of these infernal engines. However, no warband can match the mighty stable of Daemon Engines kept by the Brazen Beasts. Reports exist of entire armoured spearheads of Defilers scuttling at the head of Brazen Beast offensives, the Daemon Engines smashing everything from their path like the wrath of Khorne himself. None can say what dark pacts the Brazen Beasts have sealed in order to acquire such an overwhelming swarm of Defilers, but the effectiveness of the machines on the attack is undeniable.

The Bloodgorged primarily wear maroon coloured Power Armour with a brass trim. Their pauldrons and helmets are painted crimson in colour.

The Brazen Beasts' Badge is a crimson Khornate rune upon a bone coloured skull centred upon a field of crimson.

The Brazen Beasts Khorne Daemonkin Warband Colour Scheme as displayed by Barontor of the Bloodied Hilt, summoner of the Great Red Thunder

A member of The Brazen Beasts Khorne Daemonkin warband 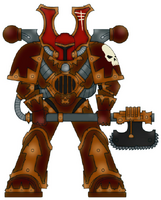 A Khorne Berzerker of the Brazen Beasts Khorne Daemonkin warband 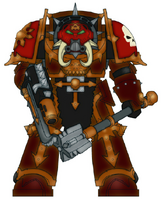 The Bloodletters seen fighting alongside the Brazen Beasts have deep red flesh and blades of dark brass.

The Brazen Beasts mark their squad numbers straight onto their helms with an eight bar tally, either painting them on with the powdered bone of their victims, or carving them directly into the warped ceramite
Add a photo to this gallery
Retrieved from "https://warhammer40k.fandom.com/wiki/Brazen_Beasts,_The?oldid=362082"
Community content is available under CC-BY-SA unless otherwise noted.