"Bran Redmaw, bloody-handed warrior. He piles the skulls of his enemies. He builds a mound of the fallen. His foes weep rivers of blood."


— From the Saga of Bran Redmaw

Bran Redmaw, known as the Curs'd Lord, Wulfen-Kin and The Bloodied Hunter, is a Wolf Lord of the Space Wolves Space Marine Chapter, one of twelve legendary warriors who lead the Great Companies into battle. He and his Great Company are looked upon with suspicion by the other 11 Wolf Lords, for they are regarded as tainted.

More Space Wolves bearing the Curse of the Wulfen serve alongside Redmaw's company than in any other. The unspoken truth is that Redmaw himself has been afflicted by the curse.

Bran Redmaw is one of the twelve Wolf Lords that lead the Great Companies of the Space Wolves Chapter under the Great Wolf Logan Grimnar. Leading a Great Company of up to 200 Space Wolves Astartes, the character of each Great Company's lord to a greater or lesser extent influences its warriors, and Bran Redmaw's company is renowned for being a savage pack of cunning and ruthless killers, for an enemy force trapped by Redmaw's Great Company will quite literally be torn to pieces. As a result, Bran's Great Company is looked upon with some suspicion by the other eleven Wolf Lords. They all respect the company's fighting prowess, but those that serve under the banner of the Bloodied Hunter are regarded as tainted and draw the eyes of those of the Imperium outside the Space Wolves Chapter more than they wish. The Inquisition has within its records pertaining to Astartes deviation many accounts of terrifying feral creatures shadowing the deployment of the Great Company. These have yet to be proven and the Space Wolves Chapter ignores all demands to account for these allegations.

The Bloodied Hunter is the sign associated with those of the Mark of the Wulfen, and indeed there are many in Bran's Great Company who bear that particular curse. Amongst the upper echelons of the Space Wolves there is an unspoken truth as to the reason why: Redmaw himself has been afflicted by the curse. Bran does little to dispel the rumours, and that he has begun to take to the battlefield alone rather than leading his Battle-Brothers only serves to court the growing attention the Inquisition and the Ecclesiarchy pay to his Great Company. No one has yet dared to question their loyalty to the Imperium, and its proven record combating Mankind's enemies has forced the Inquisition to so far stay its hand.

After the death of Wolf Lord Andhrimnir during the Mordrak Campaign, Bran Redmaw was promoted by Andhrimnir's retinue to replace him as leader of his Great Company, as is the Space Wolves' tradition regarding rites of succession. This was not a popular decision. Other Space Wolves Wolf Lords stepped forth, in private, to voice their concerns. Amongst them was the venerable Wolf Priest, Ulrik the Slayer. They worried that Bran could not be trusted with such a position of power, for there was the possibility that he would allow his darker, feral nature to take control of his mind and soul. The Great Wolf quashed all complaints, for he could see that Bran was an extraordinary warrior and, through sheer force of will, had subdued the beast within. Logan Grimnar looked to the advice of his eldest councillor, Bjorn the Fell-Handed, in this matter. Only the ancient Dreadnought was old enough to recall that Bran would not be the first afflicted Space Wolf to reach such high office within the Chapter with the Curse of the Wulfen upon him.

The Great Wolf fully supported Bran's promotion to Wolf Lord, but not without caution as he ordered Ulrik the Slayer and his Wolf Priests to keep a vigilant watch over Bran and his Great Company, so that they did not stray too far and risk repeating the mistakes of the past. Knowing that the beast lurks within, Bran eschews the close company of his warriors, even on the battlefield (or perhaps especially upon the battlefield). Bran issues his orders before deployment, preferring to hunt alone or in the company of a pack of Fenrisian Wolves, leaving his trusted Wolf Guard battle leaders in direct tactical control. When the Curse of the Wulfen takes him, Bran is transformed into a huge ravenous wolf-beast; fully twelve feet tall, powerful, fast, and with claws that can rend Plasteel and fangs like Adamantium daggers. Consumed by a frenzied bloodlust, this Wulfen, the Redmaw, tears its foes apart in an orgy of blood. But despite the creature's bestial appearance, Redmaw is no mindless killer. The beast still retains a hunter's cunning, using stealth and patience to close with its prey before pouncing upon them in an explosion of bloody violence.

The Space Wolves Chapter takes its initiates from the barbarian tribes of Fenris. Already fierce warriors, the body of each Space Wolf initiate will undergo far more changes than initiates of other Chapters. Amongst the most common changes are that the initiate's senses will become vastly superior to that of other Space Marines, his teeth will lengthen into fangs capable of tearing through plasteel, and his skin will toughen to the texture of leather. Given his naturally fierce persona and now genetically altered build, the initiate could almost be described as displaying feral traits when compared to other, more "Codex", Chapters such as the Ultramarines. Also, as the Space Wolf ages, his body will undergo further changes, although these are rarely recorded and it is unknown outside of the Space Wolves how commonly they occur.

The source of these "mutations" is believed to lie within the Canis Helix, the gene-seed unique to the Chapter. Imbibed from the Cup of the Wulfen, it transforms the Space Wolves initiate into what can only be described as a ravenous monster. Should he survive both these physical and psychological transformations, then he can continue with the rest of the initiation process. Those who do not, die. Even once the Helix has been established, it still has the power to affect the warrior throughout his life, particularly when the ferocity of the Space Wolf, barely kept in check at the best of times, is roused in battle. Then the warrior may finally succumb to the Curse of the Wulfen, and he is transformed once again into the beast he has fought for so many centuries to subdue.

Amongst the Space Wolves, there is one group under the shadow of this curse more than any other, that of Bran Redmaw's Great Company. It is renowned for its savagery in battle, and the Inquisition has, within its records pertaining to loyal Adeptus Astartes deviation, accounts of terrifying feral creatures shadowing the deployment of the Great Company. These though have yet to be proved, and the Space Wolves Chapter ignores all demands to account for these allegations. The Great Company's Wolf Lord Bran Redmaw, also does little to dispel these rumours, and that he has recently begun to take to the battlefield alone rather than leading his battle-brothers only serves to court the growing attention of the Inquisition and the Ecclesiarchy are paying upon the Great Company. No one has yet dared to question their loyalty to the Imperium, and its proven record combating Mankind's enemies has forced the Inquisition to so far stay its hand.

Each Great Company has its own nuances, be they in fighting style, organisation or battle-tactics. Bran instills the same tactics he uses when hunting his foes into his warriors -- patience and the opportune moment to strike. There are no headlong rushes to battle or proud boasting of their strength and battle prowess for the Astartes of his Great Company. Instead they meticulously plan, manoeuvre and make tactical strikes to weaken the foe before the sudden final assault, often striking from multiple directions, but always with overwhelming and pitiless savagery, tearing an enemy force to shreds. 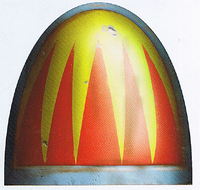 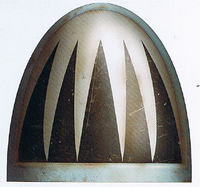 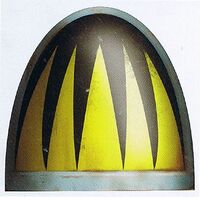 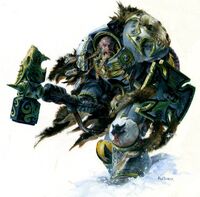 Wolf Guard Terminator Skallagrim of the Blackbrow, armed with a Thunder Hammer and Storm Shield 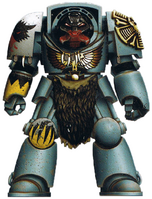 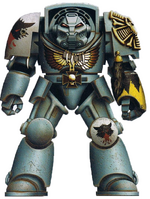 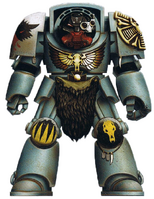 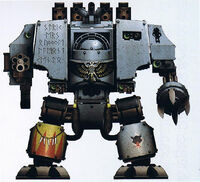 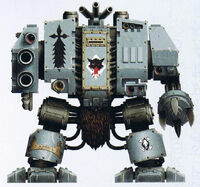