Warhammer 40k Wiki
Register
Don't have an account?
Sign In
Advertisement
in: B, Chaos, Chaos Space Marines,
and 8 more
English

A Bolt Pistol is a smaller version of the Bolter in standard use by the Space Marines and other Imperial forces such as the Orders Militant of the Adepta Sororitas and certain members of the Astra Militarum and the Imperial Navy.

Powerful and utilitarian side arms, Bolt Pistols have seen service within many of the Imperium's military forces since its inception in the 30th Millennium. The current standard pattern in use amongst the Space Marines is the Mark III.

Bolt Pistols are also used by many other Imperial forces as well as the Chaos Space Marines. A Bolt Pistol is commonly used in conjunction with a close combat weapon by Space Marine officers, Veterans and Assault Squads to make them into melee combat specialists.

As a Bolt Weapon, the Bolt Pistol is favoured over the Laspistol due to its improved killing ability, although it is less reliable and generally holds fewer shots in its magazine than a Laspistol.

A Bolt Pistol magazine carries only 6 to 10 rounds of standard Bolter Ammunition, each weighing about 0.08 kilograms and with a diameter of .75 calibre (19.05 millimetres). The pistol is able to fire either a single shot or a short, three-round burst with each pull of the trigger.

While standard Bolters are rarely used by the forces of the Astra Militarum, Bolt Pistols are quite popular amongst the Commissariat, and are also frequently used by junior Astra Militarum and Imperial Navy officers and non-commissioned officers in place of their regular-issue Laspistol sidearms; that is if they are lucky enough to be able to acquire a rare Bolt Pistol sized for normal human hands.

It is likely that Bolt Pistols used by the Imperial Guard are smaller than the Astartes Mark III, based upon the observations of the Inquisitor Thaddeus.

The Heavy Bolt Pistol is a variant of the standard Bolt Pistol that is larger and possesses a more elongated barrel to enhance its range. It is commonly employed by the Reiver Squads of the Primaris Space Marines.

The Absolvor Bolt Pistol is a variant pattern of the standard Bolt Pistol used by Primaris Space Marine Chaplains and Apothecaries. It is larger, has a longer barrel to enhance its range and is capable of producing more damage than its standard counterpart, but is somewhat less accurate as a result. 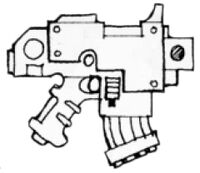 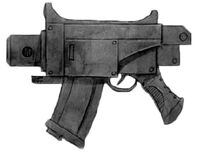 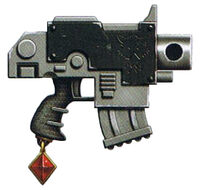 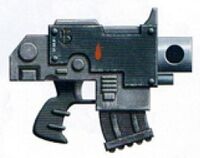 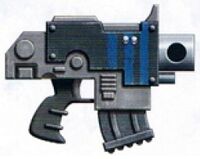 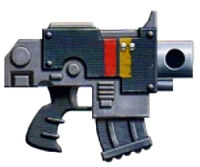 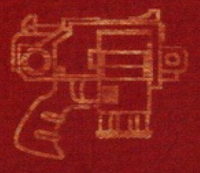 An Ikanos Pattern Bolt Pistol dating back to the early years of the Great Crusade. 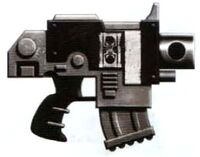 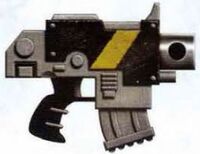 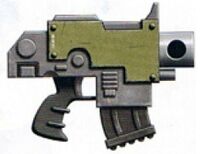 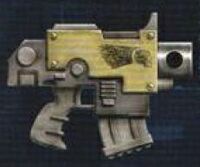 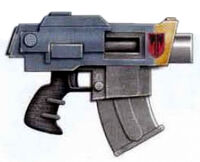 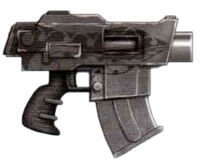 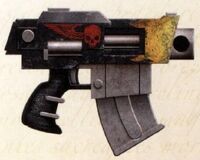 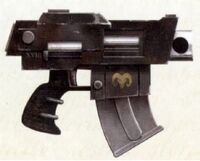 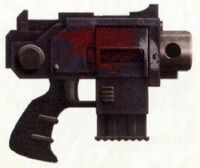 An ancient Phobos Pattern Bolt Pistol of the Iron Hands Legion, recovered in the aftermath of the Drop Site Massacre of Istvaan V. 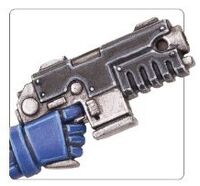 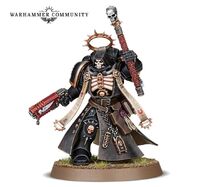