"Slay without pity; triumph without remorse. You are the legions of Khorne, His favourite warriors. You shall bring defeat and death to His enemies. You shall crush their worlds under your heel. To battle! Let blood flow in His name!"

A Bloodletter, also known as a "Chosen of Khorne," a "Warmonger of Khorne," "Slaughter-kin" and the "Crimson Death," is a Lesser Daemon (Khak'akamshy'y in the Dark Tongue) that serves as one of the eager daemonic foot soldiers of the Chaos God Khorne's Blood Legions. As a host, they march as one, in formations with supernatural precision, but in battle, they try to outdo each other in ruthless acts of cruelty and savagery.

The daemonic hordes of Khorne are largely made up of ferocious Bloodletters. These Lesser Daemons are deadly warriors believed to have been foremost amongst the Blood God's followers in mortal life and whose will is as implacable and blood-hungry as that of Khorne himself.

Sharp, needle-like teeth stud a Bloodletter's slavering jaws. Its serpentine tongue constantly flickers to taste the spilled blood of those it slays. Rippling muscles lie barely concealed beneath the Bloodletter’s scaly red hide, knotted sinews that give the strength sufficient for its jet-black claws to pierce the most unyielding armour.

This might is guided by a killing instinct that surpasses that of mortal men. A Bloodletter is unburdened by any other thought or compulsion than to reap the lives of Khorne's foes and claim skulls in the name of its divine lord. They carry massive Warp-metal swords known as Hellblades, great two-handed weapons that cut effortlessly though any armour crafted by mortals.

Bloodletters are Khorne's most numerous warriors, the mainstay of his daemonic legions. Their horrific appearance is an assault upon mortal sensibilities. Their skin is the colour of hot blood, and their angry eyes resemble burning coals. Bloodletters are possessed of an inhuman strength; they can rip a mortal apart with cold-blooded ease, and in battle their long, jagged Hellblades glow with the heinous energies of the Warp. These vicious swords are said to be as sharp as Khorne's own hatred. As they cut through the flesh and bone of mortals, they become coated with the blood of the slain, glowing ever brighter as they kill, invigorated by the rich taste of death.

Whilst Bloodletters are not the subtlest of creatures, they are not above subterfuge if it will lead to an even greater tally of skulls to offer the Blood God. However, where another daemon may flatter and ensnare a mortal victim to torture their soul within the Realm of Chaos in perpetuity, a Bloodletter only ever resorts to persuasion or lies in order to stab a foe in the back. Bloodletters seek the blood of mortals to offer at the foot of the Skull Throne of Khorne, ever hungry for fresh prey, ever willing to tear the warm flesh from their victims with their claws and smear the gore upon their curving horns in triumph and utter ecstasy.

Acts of violent rage and deeds of bloody murder resound through the Warp like a thunderous drumbeat, a booming echo that calls the daemons of Khorne to war. Endless regiments of Bloodletters rush to answer the summons within the Realm of Chaos, their stooped forms eager to join in the slaughter. Filled with an insatiable desire for blood, these Lesser Daemons of Khorne are amonst the most aggressive creatures within the Warp. Their unholy howls of triumph when spilling blood chill the hearts of all who hear them. Equally fearsome are their ceaseless screams of "Blood for the Blood God! Skulls for the Skull Throne!" Simply put, Bloodletters are violence and murder given physical form and purpose within the Immaterium by the will of the Blood God.

The most numerous troops among the daemonic hosts of the Blood God are the scarlet-scaled blademasters, the Bloodletters of Khorne. Though they are roughly humanoid in shape, that is where the similarities to Humans, Aeldari, or Orks end. These fell creatures possess bestial, snarling faces. Their wiry, iron-muscled frames are the hue of their master's favoured red, reeking of spilt blood. Black horns thrust out from the flesh of their heads, acting as cruel-edged weapons in their own right. Their fingers end in wicked claws, sharp enough to make a mockery of armour as easily as flesh. Ebon tongues flick across teeth that have dined on the hearts of a thousand warriors from a thousand worlds, the taste of each lingering in the memories of the fiend.

Unlike the daemonic foot soldiers of Khorne's rival gods, Bloodletters march to war in regimented formations, accompanied by an overwhelming charnel stench and proudly displaying the blood-soaked banners of the Lord of Battle. Though they might materialise out of the Warp and even manoeuvre in rank-like precision, once they draw close to their prey, it becomes apparent that they are barely restrained killers that bay for the blood of their foes. To the sound of brass war-horns they charge, quickly breaking formation as they enter a battle furore. There is a reason the Blood Legion most centred upon cohorts of Bloodletters is called the Red Tide; most caught in the Lesser Daemons' wave are instantly washed away in a sea of blood.

Few foes can withstand such an onslaught, for the sight of their own comrades cut in half and butchered by howling Bloodletters is enough to break even the stoutest soldiers. Those combatants not instantly slain or fled are greeted with a frenzied rage, the Bloodletters screaming with fury as they fall upon them with dark blades, teeth and claws. As they slash at their opponents, the Daemons spit obscene promises of death and suffering, their guttural voices inspiring dread in all who hear them. It is not uncommon for Bloodletters to fall upon each other in their competition to spill the most vital fluid or claim the skulls of the greatest warriors on the battlefields; in such a way, each strives to distinguish himself before the eyes of the their legion's Heralds or Bloodthirster, as well as before the almighty Khorne himself.

A soldier who locks eyes with a Bloodletter is often frozen stiff with fear, unable to look away as the beast's soulless, black orbs guide the strokes of its vicious black Hellblade through the neck or guts of his victim. Wherever these daemons exist, blood is sure to flow and headless corpses stack upon the wet earth like trees after a tremendous storm. Only the most skilled of warriors would have any possibility of surviving battle with a Bloodletter, but the furious battle itself only serves to bring them one step closer to following the Lord of Skulls.

Bloodletters are ferocious daemons that descend upon their foes in baying packs. The sight of spilt blood only drives them further into a frenzied rage, screaming with fury as they fall upon mortal flesh with dark blades, teeth and claws. Few mortals can withstand such an onslaught, for the sight of their own comrades cut in half and butchered by howling Bloodletters is enough to break even the stoutest of hearts.

Like all of Khorne's creatures Bloodletters are formidable and ferocious warriors, but they are also capable of vile and low tactics. The Heralds of Khorne, the most veteran group of Bloodletters, lead the vast daemonic legions of the Blood God to battle. Unlike the armies of other Chaos Gods they tend to march in disciplined regiments accompanied by horns and drums, a living example of Khorne's militarism. However, the craving for skulls, bloodshed and personal glory in battle usually turns this discipline into frenzy once they charge the enemy. Bloodletters are notorious for their fearsome advances, and, being daemons, exhibit enormous strength considering their body mass. Each Bloodletter is a master of combat from constantly fighting their brethren in the Warp as well as their mortal enemies.

A Bloodreaper is a Bloodletter who has been chosen to lead a small unit of its fellows into combat. They are effectively the non-commissioned officers of Khorne's Blood Legions.

Even among Bloodletters, some daemons demonstrate an exceptionally profound talent for destruction, earning the recognition of the Lord of Blood and becoming Heralds of Khorne. These daemons assume a leadership role among their kind. While usually less powerful than a Greater Daemon, they are justifiably regarded as a significant force to be reckoned with, even among their own kind. They are rampaging combat masters, more than capable of single-handedly taking down entire squads of lesser fighters in shows of martial skill and sheer savagery that only the best mortal warriors could hope to withstand.

The Heralds of Khorne are the strongest of the Bloodletters who delight in decapitating their victims and plunging their wailing Hellblades into the beating hearts of their foes. However, their role in combat is to serve as the directors of their fellow daemons' massacre of mortals, and to this end, these daemonic officers of the Khornate Blood Legions imbue their followers with a portion of their own eternal malice, heightening the inherent bloodlust of the daemonic and mortal minions of the Blood God to a fever pitch.

Bloodletters are the most common daemons to be specifically devoted to the service of the Blood God as Heralds of Khorne. This frequency should not be taken as a sign that their abilities are somehow lessened, as these creatures are pure manifestations of the Lord of Rage and are amongst the most brutal and devastating warriors in the galaxy. With every swing of their Hellblades, they spread bloodshed and devastation in the name of their dark master.

Only the strongest Bloodletters can hope to claim a Lesser Daemon of Khorne known as a Juggernaut as their mount. Such an undertaking is not for the weak, for a Bloodletter must drag forth its chosen mount from the Blood God's stockade and survive long enough to break the homicidal steed.

Many an aspiring daemon has leapt upon the back of an enraged Juggernaut, only to be thrown and crushed into an unrecognisable smear. However, once mastered, a Juggernaut becomes the most lethal of all war-mounts. Those who succeed become Bloodcrushers, Daemonic Knights of the Blood God, the resulting daemonic cavalry adding a new weapon to Khorne's arsenal. Bloodcrushers are feared for their almost unstoppable charges.

They rush headlong into the thickest part of a battle, scattering opposition as pounding hooves pulverise those not quick enough to avoid the charge. Stunned enemies are relieved of the burden of their heads as the rider's black Hellblade comes crashing down through their necks. The resultant spray of arterial blood rains down into the crushed forms that lie beneath the Bloodcrushers' feet, creating rings of carnage that leave behind a battlefield dotted with crimson circles of suffering.

"Fight or flee psyker, it matters not. I will rend you with my blade and revel in your blood. I will tear out your skull and flog you with it even as you die before I place it on the throne of Khorne!"

Ancient colour sketch of a Bloodletter

Another Ordo Malleus Departmento Analyticus sketch of a Bloodletter 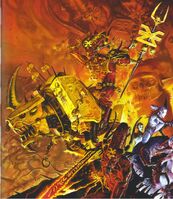 A Herald of Khorne riding a Juggernaut
Español
Community content is available under CC-BY-SA unless otherwise noted.
Advertisement