The Bloodgorged are an infamous Khornate warband of Khorne Daemonkin that prey upon the followers of the other Chaos Gods. Their ships haunt the Eye of Terror, the Maelstrom and many other hunting grounds where renegades can be found.

It is not known when the Khorne Daemonkin warband, The Bloodgorged were first formed, as their first blood-soaked campaign wasn't recorded until the early centuries of the current 41st Millennium. All must fear the fury of the Bloodgorged, and none more so than those who offer praise to Khorne's sibling rivals. The Bloodgorged see those who worship Nurgle, Tzeentch or Slaanesh as blinkered fools, whose misplaced faith cannot go unpunished. They further believe that there is no greater offering to Khorne than the violently obtained blood and skulls of those who worship his brothers. As the Bloodgorged prey upon the followers of the other Chaos Gods throughout the galaxy, Chaos Cultists labour in their name all across the galaxy, stamping out rival sects and preparing the way for Bloodgorged invasions. So cataclysmic has this warband's war of faith become, that their battles spill into settled areas of space. At such times the slaughter reaches new heights, surprised defenders scrambling to drive off the warring Chaos factions. The Bloodgorged revel in the gory mayhem of such conflicts, for only in such anarchic bloodbaths can Khorne truly be offered praise.

To the galactic west of the Golgotha System located in the Segmentum Ultima, mired amid violently shifting Warp currents, the Skullstar hangs menacingly in the void. A furiously burning solar body of enormous size, this star is aptly named for it resembles nothing so much as an almighty, leering skull. Historically, voidfarers have steered well clear of this baleful phenomenon; quite besides the deadly empyric tides that surge around it, the Skullstar is said to drive men mad with hatred. Certainly, more than one ship has been lost to the murderous frenzy of bloodletting that the Skullstar inspires. To the Bloodgorged, the Skullstar is nothing less than a divine manifestation of Khorne's boundless wrath. Seeking to worship the baleful star, their warships long ago braved the Warp storms and landed hordes of Cultists and labourers upon the arid, radiation-ravaged worlds that hung in its orbit. Years on, those worlds have become fortified strongholds where vast, brazen idols of Khorne tower hundreds of feet over the barren deserts. Bloody altars rise from mountains of skulls, dark temples echo to harsh litanies of heretical worship, and all the while Daemons prowl under the searing light of the Skullstar that leers over them all.

The Bloodgorged's icon is an elongated rune of Khorne, and is usually displayed in black centred on a field of crimson. 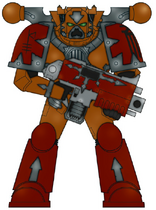 A member of The Bloodgorged Khorne Daemonkin warband.

Another member of infamous Khorne Daemonkin warband, The Bloodgorged. Note that their weapons are also coloured the same crimson colour as parts of their battle-plate. 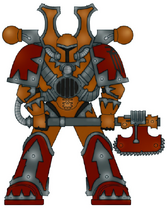 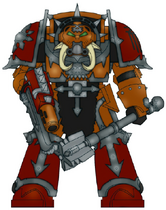 A member of The Bloodgorged Khorne Daemonkin warband, arrayed in Terminator Armour and wielding a Combi-Melta and a Power Maul

A summoned Daemon of The Bloodgorged, which has dark red flesh, wielding a blood red blade and a brazen sword hilt

The squad numbering system of the Bloodgorged is a variation of the Khornate axe rune; the tally marks take the form of etched lines on the haft and, at five, an additional blade upon the axe itself.
Add a photo to this gallery
Retrieved from "https://warhammer40k.fandom.com/wiki/Bloodgorged,_The?oldid=264682"
Community content is available under CC-BY-SA unless otherwise noted.