The Blood Wolves are a warband of Chaos Space Marines that were once a Great Company of the Loyalist Space Marine Chapter known as the Space Wolves. Following their corrupted leader, Svane Vulfbad, these once-proud warriors are sworn to the service of Khorne.

The Blood Wolves were once the Great Company of Svane Vulfbad, Wolf Lord of the Space Wolves Space Marine Chapter. He became so disillusioned with the grinding workings and soul-killing bureaucracy of the Imperium that he and his Company turned to the worship of Chaos, and more particularly to the faith of the Blood God Khorne.

In 913.M41 Wolf Lord Harald Deathwolf and his Great Company were charged by the Great Wolf Logan Grimnar to track down and execute the notorious Traitor warband and their leader. Deathwolf and his company eventually located Vulfbad in the Cliedes System, tracking their elusive quarry to the storm-wracked moon of Gallimius. Deathwolf rode his ferocious Thunderwolf through the planet's ferrite dust storms at the head of a small strike force of Wolf Scouts. The visibility was so bad that Deathwolf had to track his quarry purely by scent, but he later claimed the stink of rank sweat and treachery was so strong it was child's play to follow. It has been said that Harald's senses are so sharp he can smell the fear of his prey from several leagues distance.

After weeks of stalking their prey, Deathwolf's hunting party cornered the Blood Wolves atop a dust-crowned mountain just as the vile Traitor Vulfbad was completing a sorcerous summoning ritual that would have seen his traitorous forces thronged with daemon allies. The Renegade Space Wolf fought like a madman even after many of his Astartes had been slain, badly wounding Harald's Thunderwolf in the process, but he was ultimately outmatched. As Harald brought his axe around to deliver the deathblow, a bolt of lightning struck them both. When the dust settled all that remained of Vulfbad and his warband was his Frost Axe, a shard of which now juts from the cybernetic jaw of Harald's Thunderwolf. The current status of the Blood Wolves and their leader remains unknown.

The Blood Wolves wear bronze Power Armour. They make use of unit markings similar to those of the Space Wolves, except coloured cream and blood red.

The Blood Wolves have no specific identifying symbol, instead incorporating the various blasphemous sigils and iconography of Chaos as their identifying marks. 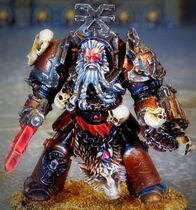 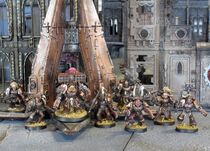 An aspiring Chaos Champion leads a squad of Chosen into battle 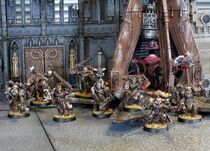 Svane Vulfbad leads his Blood Wolves into battle
Add a photo to this gallery
Retrieved from "https://warhammer40k.fandom.com/wiki/Blood_Wolves?oldid=356448"
Community content is available under CC-BY-SA unless otherwise noted.