"Give bloody praise to the Skull Throne!"

"Give bloody praise to the Skull Throne!"

The Blood Disciples are a warband of Chaos Space Marines who were once the 8th Company of the Emperor's Wolves Chapter of Loyalist Space Marines.

In 888.M37, the Emperor's Tarot indicated a Chaos threat from the Goreworlds in the Eye of Terror. The Emperor's Wolves were sent to destabilise the threat. After many solar weeks of searching, their 8th Company located a twisted hermit, known as the Red Prophet, as he preached to worshippers of Khorne from a pillar of gushing blood.

Soaring on their Jump Packs, the 8th Company carved their way to the Red Prophet and cut him down amidst the geyser, but all those touched by the blood instantly became devoted to Khorne. The Blood Disciples, as the 8th Company is now called, have led raids against the Imperial worlds of the Segmentum Obscurus ever since.

Due to the fact that the 8th Company of the Emperor's Wolves had originally been designated as one of that Chapter's Assault Companies, the Blood Disciples possess an unusually large number of Chaos Raptors, the Chaos Space Marines' equivalent of Assault Marines.

The Blood Disciples' badge is a daemonic skull marked with a drop of tainted blood centred on a field of brass. 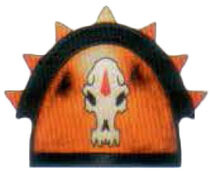 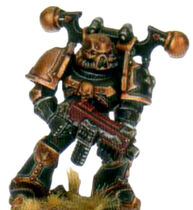 Blood Disciples Warband Colour Scheme displayed on Xothragan Sky-Scourge, Bringer of the Red Prophet's Word
Add a photo to this gallery
Retrieved from "https://warhammer40k.fandom.com/wiki/Blood_Disciples?oldid=347035"
Community content is available under CC-BY-SA unless otherwise noted.