Perhaps once intended to make the Blood Axes natural leaders, these qualities have instead earned them a reputation among other Greenskins as little more than treacherous dogs. In fact, most of the Blood Axes' reputation is undeserved. True, they have made the most contact with the forces of the Imperium, occasionally fighting as mercenaries and making extensive use of Imperial war materiel, but then every Ork can see the funny side of extorting weapons from human planets only to use them against their former owners.

This klan was once very powerful, and easily dominated Ork society for a long time. When they began having too many friendly dealings with other aliens (especially humans), it was too much for the other klanz to bear. A lot of Blood Axe Boyz were wiped out in a nasty inter-Ork war known as Da Big Party. As a result the klan was overthrown and the surviving Blood Axes fled into hiding. Now they continue to deal with Mankind out of necessity, since the klan has become dependent on subsidies of teeth paid to them by the Imperium. The source of these payments comes from Imperial prospectors sent out to find old battlefields and rip the teeth out of Ork corpses. Other klanz are especially disgusted by this -- not because the Blood Axes accept such teeth, but because they encourage humans to take what the Orks consider their property.

Orks from the Blood Axe klan have the most frequent interaction with the Imperium of Man, and through their long and mostly acrimonious acquaintance with the humans, they have developed skills and abilities that cause other klanz to look at them askance. Qualities that would recommend the Blood Axes as natural leaders amongst most of the galaxy's other starfaring races instead see them labelled as treacherous scumbags by the vast majority of Greenskins. In fact, most of the Blood Axes' reputation is undeserved. True, they have made the most contact with the Imperium, occasionally even fighting for the humans as mercenaries, and making extensive use of Imperial war materiel. Then again, every Ork can see the funny side of extorting weapons from human planets only to use them against their former owners.

Considered untrustworthy by their fellow Orks due to their peculiar ways, these Orks put a greater emphasis on "cunning and tactics" than on the typical brute force approach favoured by other Greenskins. Blood Axes often trade instead of steal, parley instead of bellow, sneak instead of charging headlong into the withering fire of their enemies, and even retreat instead of dying in a heap with nothing to show for their effort.

Some have even taken to the stars as Freebooterz, where they split their time between piracy, raiding, and honest trade. They are every bit as dangerous in battle as their less sophisticated cousins, perhaps even more so thanks to their high level of innate cunning, which allows them to think around problems. In combat, they use battlefield tactics closer to those of a professional army as opposed to the more usual Ork tide of unrestrained and thoughtless violence, using moderately organised squads instead of the traditional mobs and employing basic tactics like enfilading fire, feints, staggered advances, and even the occasional clever ruse.

The Warbosses who rise up from the Blood Axes' ranks tend to have a greater grasp of big picture strategy than those from other klanz, and some of the most well-planned and well-executed WAAAGH!s in Imperial history have had a Blood Axe at their head.

The Blood Axes are roundly mocked by members of other klanz that view them as cowardly wretches, especially the Goffs. The Blood Axes care little for this derision, however. Secure in the knowledge that they alone know how to make war on humans the proper way, and understandably smug in their klan's legacy of leadership and destruction, Blood Axes take these insults in stride, either having a good laugh and walking off or having a good laugh, knocking all of the offender's teeth out of his head, and walking off that much richer.

"I dunno wot' you been told! Stormboy mobz is mighty bold! We're da' hardest of da' lot...We make you lot look like Grotz."

It doesn't help the Blood Axes' reputation among the other Greenskin tribes that a lot of their young Orks end up in the Stormboyz. These odd Ork formations are a place where a young Ork can rebel against the anarchy of Ork society by following orders, conducting precise military drills and polishing their boots. Heckled and laughed at by most other Orks, the Stormboyz spend solar hours each day marching about and chanting, saluting each other and generally carrying on in very un-Orky ways.

The jeers of the other mobs tend to fade away when battle is joined though and the Stormboyz prove their worth. Using potent Rokkit Packs, they fly into the fray on pillars of smoke and fire. As they age, most Orks leave the Stormboyz for "proper" mobs, but some gain a taste for it, especially Blood Axes, and will rise to command whole formations of black-booted young Orks.

Ork Kommandoz are those rare Boyz who have been "touched by Mork," and emulate that Orkish god's tendency towards "kunning" (i.e. resorting to dirty tricks) first and open combat second. Unlike the average Ork Boy who enjoys loud weapons, big explosions and fast vehicles, Kommandoz prefer spreading panic behind enemy lines before launching a perfectly-timed ambush. Blood Axes see little worth in going through all the effort of making a "kunnin' plan" only to be gunned down like a fool before it can even be executed, and their approach to combat is more circumspect than others.

In fact, along with great Warbosses, many Ork Kommandoz come from the Blood Axe klan. While not perhaps as stealthy or as well-trained as those special forces operatives of the Imperium, Aeldari, or T'au, they are still brutally effective. It is their use of obfuscation, misdirection, and plain sneakiness that has given them an unsavoury reputation among others of their race.

Blood Axes use stealth to reach their enemies, denying them the chance to fire and gutting them before they know the battle has begun. Unlike most Orks, Blood Axes actively work to avoid being shot while running screaming across the battlefield. As such, Blood Axes frequently ambush their foes, using dense terrain such as jungle, ruins, or other enclosed areas to close to melee combat before their enemies can react.

Blood Axes also employ decoy units from time to time, drawing the enemy force out of position to expose vulnerabilities that they can exploit. If badly outnumbered, Blood Axes sometimes retreat, regrouping and striking again if the opportunity presents itself. Blood Axes prefer to fight their enemies in hand-to-hand combat, and prefer to get there alive. They often opt for a silent (or, at least, relatively more silent) approach, scattering back into cover if they meet exceptionally impressive resistance.

Blood Axes prefer muted colours for their clothing and wargear, with black and green being predominant, along with numerous patterns and colours of camouflage, both self-made and looted from enemy forces. Among their many strange behaviours, perhaps the most confounding to their enemies are their use of stealth and camouflage, and their proclivity for clandestine warfare. While they alone among the Ork klanz use camouflage, the Blood Axes do not understand why it works, only that it does.

This means that a group of Boyz might have a dizzying array of different camouflage patterns among them, typically none of which are appropriate for the environment in which they are fighting. It matters little, however, because no matter what kind of camouflage they wear, and no matter what branches, bits of moss, scraps of metal, and the like, that they strap, pin, nail, or glue to themselves, the camouflage keeps them hidden as long as they think it keeps them hidden.

Blood Axe Orks have also adopted the use of personal adornments commonly worn by soldiers of the Imperium. These militaristic icons hold no meaning for the Blood Axes, who have adopted the symbols purely as warlike decorations. When actual Imperial medals and badges are acquired they are deeply revered, and thought to contain potent magic for their owner.

The Blood Axes' banner features crossed axes with bloody blades in a dark green circle on a black banner. Along with the axe sigil, their banners often feature other icons extolling their cunning and sneakiness. 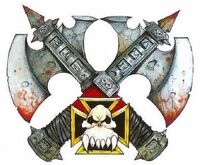 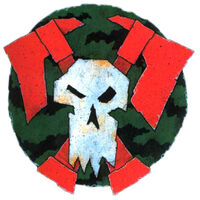 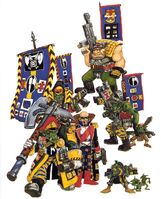 Orks of the Blood Axes Clan

Ancient depiction of a Blood Axes Warboss with attending Grot

An Ork Stormboy, strapped into a Rokkit Pack 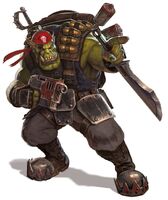 Blood Axes Nob, wielding a large axe or Choppa -- the source of their klan name

A pair of Blood Axes Nobz wielding Choppas and Shootas 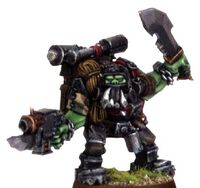 Retrieved from "https://warhammer40k.fandom.com/wiki/Blood_Axes?oldid=340048"
Community content is available under CC-BY-SA unless otherwise noted.