The Blood Angels 2nd Company is known as "The Blooded" -- a hundred loyal Battle-Brothers of the Blood Angels Space Marine Chapter, gathered together under the command of Captain Donatos Aphael, the "Master of the Watch."

Within the Chapter they are renowned for their purity, both in mind and body, and of all of the companies of the Blood Angels, theirs is among the least prone to mass instances of the Black Rage.

The Blooded embody the perfection of Sanguinius in both word and deed and, when unleashed upon the battlefield by their commander, strive to live up to their Primarch's glorious example. However, this thirst for perfection is not without a price for the Battle-Brothers of the 2nd Company -- a price that must be paid in blood.

Following the Devastation of Baal by the Tyranid Hive Fleet Leviathan, the composition of the Blood Angels Chapter had to be rebuilt, in many cases with the Primaris Space Marine formations brought by Roboute Guilliman when he arrived at Baal as part of the Indomitus Crusade. Great heroes fell during that campaign, replaced by worthy successors.

Just as each Chapter of the Adeptus Astartes is unique among its peers, so too are the companies of the Blood Angels ancient and sacred brotherhoods in their own right. Legends say that "The Blooded" earned their name long ago from Captain Athaeus, remembered as one of the first to command the 2nd Company.

As the tale goes, Athaeus the Blooded was among the first of his brothers to master the Red Thirst. Some say it was just after the Second Founding, when the Chapter was forged from the Legion that had fought to protect the Emperor from the treachery of Horus, others that it was later, during the dark centuries that followed.

Whenever Athaeus lived, the stories agree he was a great warrior, created in Sanguinius' image. Even in those days, the genetic Flaw had already started to make itself known within the ranks of the Blood Angels. Athaeus learnt that only by giving in to the Red Thirst was he able to master it.

This revelation came upon him when he was drenched in the blood of his foes. It was amid a broken citadel of the Emperor's Children when Athaeus had just finished quenching his rage with the lives of the Traitors. Only when he came back from the brink of madness did he feel a calm fall upon him, and knew in that moment that the Red Thirst no longer had mastery over his mind, and that he could channel it to his will.

Thus, millennia later, The Blooded still relate tales of Athaeus and strive to master the same Flaw that assailed their ancestor. It has become a practice within the secret circles of the 2nd Company that no battle-brother can know the Red Thirst until they have completely given themselves over to it. This process is known to the company as being Blooded, and it is from this that they draw their name.

Although casting down any foe while in the grip of the Red Thirst is sufficient for the Blooding, it is considered favourable to expend this rage upon a cursed Traitor, just as Athaeus did. Whether or not the process of Blooding grants the battle-brothers of the 2nd Company any more mastery over the Flaw than other Blood Angels is unclear.

However, Captain Aphael encourages the continuation of the tradition -- he himself having undergone the rite before earning the mantle of Company Captain. What is apparent is that, while the Blooded more frequently display the Red Thirst than their brothers, they are less likely than any other Blood Angels to fill the ranks of the Death Company.

This polarisation of the Flaw led Sanguinary High Priest Corbulo to become very interested in The Blooded in his quest to cure the Black Rage. However, he has as yet been unable to discern any specific reason for this discrepancy from among the traditions and secrets of the 2nd Company.

The company's gene-seed likewise holds no answers, drawn as it is from the same stocks as the rest of the Chapter and burdened with the same mutations. Corbulo has begun to suspect that whatever drives The Blooded to perfection is as much of the mind as it is the body. Unlike the Flesh Tearers, which under the stewardship of Gabriel Seth have given in completely to the Red Thirst, The Blooded channel the Flaw with every action and deed.

When the urge to rip apart their foes with tooth and nail swells up within their hearts, and the very scent of blood seems to hang heavy upon the air, the battle-brothers remember their Blooding. They recall the feeling of bringing death to their enemies and how their foes' flesh came apart under their crushing fingers.

In this moment their bodies succumb to the Red Thirst, charging towards their quarry, but their mind remains clear and filled only with exacting purpose. To their foes, in the fleeting moments of terror and hatred before they are hacked down, the channelled rage of The Blooded is an essence indistinguishable from the battle-madness of other Blood Angels.

And yet, to the Sanguinary Priests, The Blooded are unique. As they fight, their expressions remain serene and purposeful, the light in their eyes unclouded by the madness commonly seen in a Battle-Brother in the grip of the Red Thirst.

In recent centuries The Blooded have found themselves at the forefront of the Chapter's fighting time after time. It was The Blooded that destroyed the Mirrorfane on Hydris V. When the Hydris Planetary Defence Force fell to possession and madness, the planetary lords sent out a plea for aid from the Imperium.

First to arrive were three regiments of Valhallan Astra Militarum, six thousand veteran soldiers fresh form the warzones of the Shardfell Reaches. These too succumbed to the Keeper of Secrets trapped within the Mirrorfane, swelling the armies of Chaos.

By the time Captain Aphael and The Blooded reached orbit above Hydris they found a world fortified against them and thousand of enemies hungry for their blood. Without hesitation, Aphael divided his company into two demi-companies and launched lightning strikes against both the planetary lords of Hydris in their Stormwrought Citadel and the Mirrorfane fortress.

Guided by the masterful command of Aphael, the fury of the Blood Angels crushed the Traitors' defences. Aphael himself shattered the Mirrorfane with his Power Sword, banishing the Greater Daemon of Slaanesh back into the Warp.

The Hydris War was a perfect example of how the Red Thirst is tempered by the discipline and planning of The Blooded. Captain Aphael organised the demi-company that struck the Stormwrought Citadel around his Devastators, Dreadnoughts and heavy tanks. Their combined firepower allowed them to tear apart the Traitors and blast a way into the inner sanctums of the planetary lords.

Meanwhile Aphael personally led the other demi-company, this one built on a foundation of Assault Marines and fast-moving armoured transports. These warriors embraced the fury of the Red Thirst to overcome the superior numbers of their foes. With this tailored battle-group Aphael was able to take the forces defending the Mirrorfane by surprise, obliterating them completely in a furious close-quarters engagement.

Note: The following information is only accurate to 999.M41 and does not reflect the recomposition of the 2nd Company following the Devastation of Baal and the introduction of the Primaris Space Marines.

Notable Members of the Blooded

The Blood Angels 2nd Company are typical of their Chapter’s line formations. Heroic and courageous, many bear marks of honour upon their armour and wargear. Personal embellishments are much in evidence, for the Blood Angels are artistically gifted and individualistic warriors who honour their weapons and armour with the fruits of their creative talents. 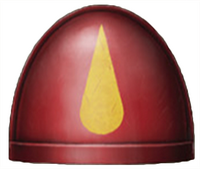 Like the rest of the Chapter, these 2nd Company Assault Marines wear yellow battle helms to denote their Assault status]].

Decorations borne upon the power packs of Battle-Brothers' armour show their elite status.

Captain Donatos Aphael, note that he bears the golden colour and High Gothic numeral of his company upon his tabard.

Blood Angels 2nd Company Champion wearing Artificer Armour; note that he bears additional decoration on his left shoulder pauldron and on top of his power pack, denoting his elite status. 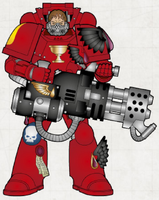 Blood Angels 2nd Company Battle-Brother of the 3rd Squad; The Blooded sometimes take to the field adorned with scrolls proclaiming their noble victories past.

Sergeant Borgio Back Banner; Borgio's banner bears a number of Purity Seals won over many years of service to the Chapter, and a personal honour badge earned in The Blooded's assault on the Mirrorfane fortress.

Sergeant Goriel's Back Banner; Goriel's banner displays the red and yellow heraldry of the 2nd Company, as well as the quartered iconography that commemorates the Chapter's losses at Safehold. 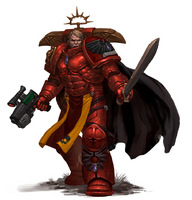 A Blood Angel of the 2nd Company, "the Blooded," in the throes of the Red Thirst savagely attacks the Chapter's foes. 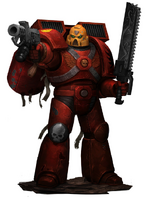 Captain Aphael and the Veteran warriors of his personal Command Squad. 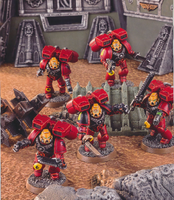 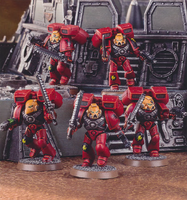 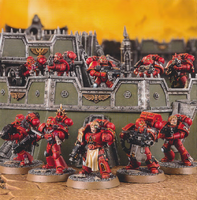 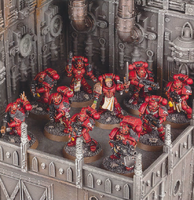 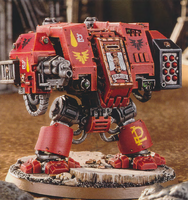 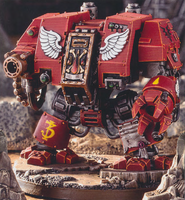 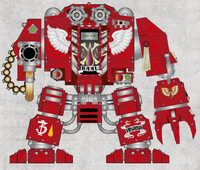 A Blood Angels 2nd Company Dreadnought; Markings on this Dreadnought's right greave show that he is the third Dreadnought brother of the Blooded; on his left greave is a scrollwork design in honour of the Chapter's Primarch Sanguinius.

A Land Raider Achilles of the Blood Angels Chapter; the single yellow blood drop symbol indicates that it is attached to the Chapter's 2nd Company.

Blood Angels Predator Destructor Battle Tank; note the company emblem on its forward bulwark, along with its vehicle numeral, denoting it as the second vehicle of its squadron. 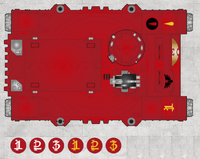 A Blood Angels 2nd Company Rhino armoured personnel carrier (Overhead View); note the Chapter icon and vehicle numeral upon the hull, along with the company emblem and squad markings of the Blood Angels that they transport. 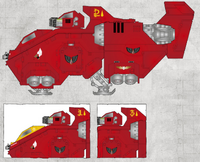 A Blood Angels Stormraven gunship, note the company emblem and vehicle numeral on its dorsal foil; below, are two examples of vehicle numbers within the specific squadron, with 'I' being the squadron leader, this Stormraven's status is also denoted by its yellow cockpit hatch.
Español
Community content is available under CC-BY-SA unless otherwise noted.
Advertisement