"You cower from Nurgle's gifts, revolted by his touch. Fear not! Nurgle forgives your ignorance, for he is a generous god and will bless you all the same. Soon your fear will melt away before the Plague Lord's generosity, and with blinded eyes you will see the glorious truth."


— Lord Lurgorias during the boarding of the frigate Noble Blade

Blightlord Terminators are an elite formation of Chaos Terminators utilised exclusively within the ranks of the Death Guard Traitor Legion. Relentless and unstoppable, these elite Death Guard warriors are bound forever to mutated suits of Cataphractii Pattern Terminator Armour.

They stalk forward with guns blazing, mercilessly mowing down rank after rank of the enemy. Combi-weapons, Plague Spewers and Blight Launchers add to the fusillade, reducing infantry and vehicles to slop.

Blightlord Terminators are an elite formation of shock troops utilised exclusively by the Death Guard. Bound as they are to their Cataphractii warplate, these deadly warriors stalk relentlessly towards the foe's battlelines with their deadly array of virulent weaponry mowing down the enemy's ranks with contemptuous ease. At the last, the Terminators break into a lumbering charge, hefting huge weapons with which to hack and bludgeon the enemy. Flails of corruption entangle weapons and limbs in sizzling, corrosive barbs. Bubotic Axes and Baleswords tear ragged wounds into which a thousand poxes seep. By the time the Blightlord Terminators stomp on in search of new victims, nothing remains of their enemies but maggot-riddled corpses.

Combining the protective powers of Cataphractii war plate with the diseased resilience bestowed by Nurgle's gifts, Blightlord Terminators are terrifyingly hard to kill. They take great pride in this fact, advancing contemptuously into the teeth of the fiercest firestorms, mocking their enemies' attempts to lay them low. This arrogance grates upon their Death Guard brothers, but the Blightlords make such exceptional shock troops that it is overlooked -- or even condoned -- by their masters. Most Death Guard vectoriums include at least one band of Blightlord Terminators for breach assaults, boarding actions and sudden teleport strikes, and it is a rare ship of the Plague Fleets that takes to the tides of the Warp without a complement of Blightlords aboard.

Due to the amount of time they spend embarked upon diseased warships, Blightlord Terminators are saturated with Empyric entropy. This foulness pours off them in waves, rotting flesh and corroding metal in an area around them. Where the Blightlords tread, crawling veins of corruption radiate outwards like spiderwebs of rot and rust. An enemy needs only to be gripped by them in order for these energies to start agonisingly eating them away, while vehicles and fortifications exposed to the Blightlords' malignant presence soon slump and crumble.

On many Death Guard warships, Blightlords act as an elite garrison, standing ready to defend the bridge, magazines or enginarium at a moment's notice. During void battles, Plague Fleet captains bring their ships in close to an enemy vessel, allowing massed formations of Blightlords to teleport directly aboard. Like parasites hatching in the body of a luckless victim, the Death Guard Terminators begin their destructive rampage. Bulling their way down narrow corridors and corroding through sealed bulkheads, the Blightlords mercilessly crush the ship's defenders while spreading their corruption throughout its decks. 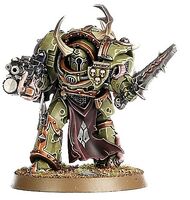 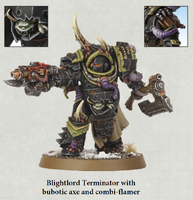 Blightlord Terminators arrayed in their virulent panoply of war

A squad of Blightlord Terminators lumber into battle supported by heavy armour
Español
Community content is available under CC-BY-SA unless otherwise noted.
Advertisement