— The Ritual of Blight, Verse VII

A Blight Grenade, also known as a Death Head of Nurgle, is a highly effective improvised grenade and chemical weapon utilised by the Plague Marines, Chaos Sorcerers and other devoted followers of Nurgle. Each is made from the decapitated head of a conquered enemy using an art the Death Guard Traitor Legion perfected long ago. Cultivating these contagions into explosive devices designed to wound and infect over a large area, Blight Grenades expose those who are injured by the corrupted pieces of plague-ridden shrapnel to the most deadly of toxins. These contain virulent toxins that eat away at armour and fill the air with thick clouds of blinding, pathogenic spores.

The most ostentatious Blight Grenades are "Death's Heads" crafted by the Foul Blightspawn in veneration of the diseased projectiles flung by Nurgle's daemonic Plague Drones. These rotting, weaponised crania are made from the severed heads of fallen enemies by Nurglite Chaos Sorcerers, each filled to the brim with a grim cocktail of festering disease, blood, pus, acid and other putrid creations allowed to fester and rot before being sealed with ancient wax. The result is a potent missile which will burst upon impact, spraying infectious liquids and toxic gases in all directions. The contagions released by Blight Grenades can penetrate cracks in armour, cause flesh to boil and slough away, and fill the air with blinding spores, all the while keeping the victim alive until the very end, so they can better enjoy the gifts of the Lord of Decay. Each splattering detonation they create is a prayer to the Grandfather's glory. The heads of more powerful enemies deliver better results in the creation and potency of Blight Grenades, so enemy champions are highly prized.

As with many Chaos-born artefacts, the origins of Blight Grenades lie in the darkest of legends. Nurgle, as even the lowliest student of daemonic lore knows, is the Plaguefather, the brewer of poxes and plagues. Desiring to know how virulent each of his creations is, Nurgle tasks his legions of Plaguebearers to keep record of every creature, mortal and immortal, that succumbs to each one. Up to a point, Plaguebearers can keep mental track of these bogglingly vast numbers, but even they cannot maintain accuracy forever -- they need some mechanism to record their tallies. Thus do Plaguebearers construct massive abacuses from rusted iron poles and the shrunken heads of plague victims. Each abacus holds many thousands of these gruesome 'beads', each of which is stuffed with maggot-ridden fluids teeming with Nurgle’s virulent gifts. This is not an attempt at defilement, as it would be if a mortal performed such an act. Rather, the Plaguebearers are as aesthetically bound as any creature, and find the heads more pleasing if their orifices weep with pungent seepings.

Were it up to the Plaguebearers, these heads would remain upon their abacuses for eternity, clacking along their poles as the number of plague-slain grows. Unfortunately for the tallymen, the Great Unclean Ones view the shrunken heads as parcels bursting with joy, and cannot bear to see such delightful gifts wasted. As such, they often send Nurglings to steal the heads from the Plaguebearers. Not all such raids are successful, as the Plaguebearers glumly expect other Daemons to interfere in their work, and all too often a diminutive thief finds himself caught and impaled, burbling with disgust, next to the very prize he thought to steal.

Should a Nurgling succeed in his mission, however, the Great Unclean One rewards him with a titbit of rotting flesh and sends the mite on his way. If the shrunken head contains particularly interesting pestilences, the Great Unclean One sometimes keeps it, in order to study the virulence within. All too often, however, the Greater Daemon quickly loses interest, adding the purloined head to the pile of gewgaws and trinkets from which he chooses gifts to bestow on particularly pestering mortals. Of course, few beneficiaries realise the true provenance of these plague-filled heads. If they survive the act of giving (and not all do), they see the thing merely as a weapon to be hurled at the enemy, rejoicing in the flies, maggots and the diseased cloud of pus that burst forth when the head ruptures.

So the story goes, Blight Grenades came about following the occasion upon which the Great Unclean One Ku'gath presented three whole abacuses full of shrunken heads to the Death Guard Traitor Legion. Other heads had been presented to mortals before, but never in such numbers. The traitors were greatly pleased with this sign of favour, for each head contained a pestilence fit to reduce an entire planetary system to a diseased-choked charnel. Indeed, this was the purpose for which Ku'gath’s gift was pledged, and over the space of a decade, the Death Guard used the heads to transform ten-score verdant Agri-Worlds of the Demeter Sector to liquefying ruin.

Soon, however, the shrunken heads were all used, and no amount of prayer or sacrifice to Nurgle, or to Ku'gath, saw the supplies restored. Both god and Daemon had grown bored with the antics of the Death Guard, and turned their attention to other things. Seeking to replenish their stocks, the Legion's sorcerers descended upon the worlds of the Demeter Sector and crafted their own versions. Heads were struck from bloated corpses, their skulls extracted and their flesh boiled in great bronze vats filled with black blood. The cavities were then filled with infected matter, and the orifices plugged shut with wax.

Though these Blight Grenades were by no means as effective as Ku'gath's original gift, the Plague Marines have ever after sought to refine the recipe to achieve its full potential. Different warbands favour different concoctions of plague. Most consider Nurgle's Rot the only true blessing a Blight Grenade should deliver, though Cankerheart and the Crimson Seep are both popular choices. It is said that only Mortarion has truly mastered the original formula, and is saving it for his next inevitable battle with the Grey Knights, when the Battle of Kornovin’s indignities will at last be repaid. 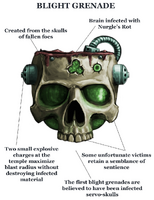 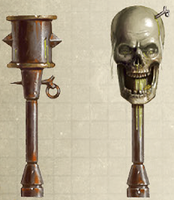 Along with the sigils of Nurgle and the segmented fly of the Death Guard, Mortarion's sons can be easily identified by the array of Blight Grenades they carry at their belts. From blunt iron stick-bombs to the virulently blessed rotting heads of their foes, these foul weapons detonate to release choking clouds of plague spores. Flesh dissolves and armour corrodes at their touch, reducing enemies to filthy sludge in mere moments.
Add a photo to this gallery
Retrieved from "https://warhammer40k.fandom.com/wiki/Blight_Grenade?oldid=323735"
Community content is available under CC-BY-SA unless otherwise noted.