"All things must wither and die. Let root rot and bower blight, to feed the pestilence of abandoned hope."

— Aghalor, the Bringer of Poxes

Blight Drones, also known as Bilecysts, are a Daemon Engine dedicated to the Chaos God of pestilence and disease, Nurgle. The Blight Drone is a seemingly weird conglomeration of insect larva, flying machine, and daemonic entity. The maddening, incessant droning buzz of their rotor disks echoing across the battlefield has become recognised as an omen of death by soldiers of the Imperium of Man. Stories from the maimed and rotting survivors of Blight Drone attacks are quick to spread through the ranks of Imperial Guard regiments that engage them in battle, each story having negative effects on morale and spreading fear and panic amongst the soldiers has become a great concern for Commissars. The threat to the morale and overall stability of a regiment has been deemed so serious that any Guardsmen caught retelling these tales faces immediate arrest and transportation to a penal unit.

The origin of this foul daemon engine of Nurgle lies back over ten millennia earlier, during the Horus Heresy. Blight Drones are believed to be twisted perversions of Vultarax Pattern Stratos Battle-Automata. The Vultarax was a robust, multi-role robot which was both heavily armed and remarkably swift. It was based on pre-Imperial STC templates for autonomous aerial machines and constructed around a powerful variant of the Cybernetica Cortex used in most Imperial robots. The Vultarax was conceived during the Age of Strife on the Forge World of Anetarbraxus and later given up in tribute to Holy Mars. From the Red Planet, it quickly spread to other Forge Worlds in the solar decades after Anetarbraxus' reunification with the Imperium. By the time of the Horus Heresy, it was one of the rare testimonies to the Forge World's existence, as Anetarbraxus had been reduced to molten slag during the Great Mandragoran Incursion.

The designs of these rare aerial Battle-Automata were more than likely spirited away by their Dark Mechanicum masters when they fled into the Eye of Terror after the Heresy ended. Within the Eye, these once noble machines became corrupted by the decaying touch of the Plague God Nurgle, becoming fly-like mechanical horrors known as Blight Drones. These hideous war engines bear rusting plates and rot-iron armour, their hulls overflowing with putrescent foulness. They drift towards the enemy, riding the high air currents over the battlefield on droning turbines, before dropping down to slaughter the enemy with cannon fire and feed upon their seeping corpse-fluids.

The very first recorded contact between the armed forces of the Imperium and Blight Drones was during the Siege of Vraks in 813.M41, where the Blight Drones were encountered in large swarms fighting alongside the Vraksian Traitor Militia and their Chaos Space Marine allies. The first sightings of Blight Drones, often recorded from the tales of badly maimed survivors, led to their initial misidentification, with some of them being labelled a conventional aircraft of some kind or as massive Warp-mutated insects. Eventually, the savants of the Inquisition were able to piece together various pieces of evidence, and the truth that they were facing a new form of Daemon Engine became abundantly clear. The creatures themselves were usually encountered in large clusters or swarms, acting much in the manner of carrion flies and ambush predators. The drones seemed to appear on the battlefield where there were large concentrations of the dead as much as they appeared to be ordered into combat by some unseen force. Whereever the Daemon Engines passed the air grew thick with poisonous fumes and the soil itself blistered and rotted.

There exist unconfirmed reports of Blight Drones coming down to rest upon piles of corpses seemingly to feed, liquifying the carcasses of the dead and the dying, and sucking up the decaying sludge, perhaps to fuel themselves or maintain their presence in the physical universe. There exists no evidence of Blight Drones landing anywhere or needing any form of maintenance, nor did they ever return to any base of operations.

Although the Blight Drone's first confirmed encounter with the Imperium was during the Siege of Vraks, and their true origins remain unknown, it was far from the last. Since the Siege of Vraks, Blight Drones have been encountered in several other battles, notably fighting alongside Chaos Space Marine warbands such as the Purge and other Death Guard splinter factions. Additionally, unconfirmed reports have placed these obscene weapons as part of daemonic incursions in both the ongoing conflicts in the Charadis Rifts war zone and the Auralis war zone, and they were also sighted during the fall of Hive World Mitra, the invasion of Forge World Graia, and during the 13th Black Crusade.

The Blight Drone's macabre and deadly reputation was more than matched in dreadful fact by their effectiveness on the battlefield. The drone is armed with a Reaper Autocannon, and a Mawcannon. The Mawcannon is a smaller version of the weapon found on the mighty Soul Grinder Daemon Engines, and fires out gouts of corrosive toxic bile that is powerful enough to eat through metal and liquify flesh in seconds as opposed to the Soul Grinder's preferred Warpfire. The bile from the drone's Mawcannon was extremely effective against the entrenched infantry and vehicles on Vraks, while troops out in the open had little cover from the drone's Reaper Autocannon. The creature's Mawcannon is also capable of spiting out large roiling masses of mutating phlegm at a distance, destroying entire enemy squads in one great blast. The Blight Drone's seemingly squat and bloated form is also unusually resilient against attacks, especially for a skimmer of their size. This quality is attributed to the living flesh and rusted armour plating of the drone, as well as the will of whatever dark intelligence is guiding them. If a Blight Drone is destroyed in combat it invariably detonates in a shower of bile and pus, and is capable of causing extreme damage to everything caught within the blast.

The technical specifications of the Blight Drone have not yet been determined by the Ordo Malleus of the Inquisition. 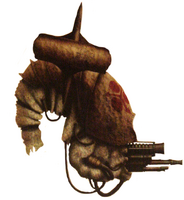 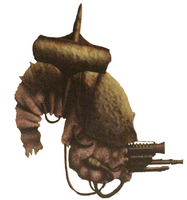 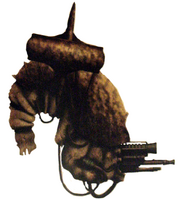 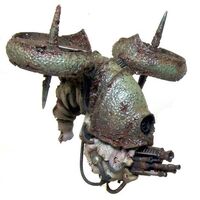 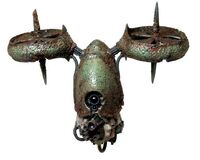 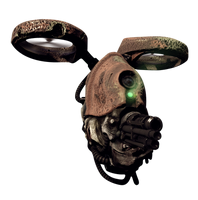 A Blight Drone in flight

Retrieved from "https://warhammer40k.fandom.com/wiki/Blight_Drone?oldid=321964"
Community content is available under CC-BY-SA unless otherwise noted.