The Black Guard is a Loyalist Space Marine Chapter and a rare Raven Guard Successor Chapter of the Second Founding. This Chapter believes in the timely application of overwhelming firepower to defeat their foes.

Overkill or half-measures are not concepts which the Black Guard understand, and they are known to leave vast, cratered ruins in the wake of their many victories.

Much of this Chapter's history has been lost to the passage of time.

Following the Warmaster Horus' defeat at the end of the Horus Heresy, the Raven Guard Primarch Corvus Corax welcomed the decision to split the Space Marine Legions into Chapters, for he knew that the Ultramarines Primarch Roboute Guilliman's vision for protecting the future of the Imperium was necessary.

It was a future the Raven Guard would face alone, however, for Corax disappeared, consumed by the tragic deeds he had committed to save his Legion. When the Raven Guard Legion was partitioned at the end of the Heresy, three new Chapters were created.

These were the Black Guard, the Revilers and the Raptors. A handful of centuries after Corax's disappearance, the gene-seed of the Raven Guard began to deteriorate, perhaps a side effect of accelerated gene-harvesting techniques employed in ages past.

Several organs unique to Space Marines no longer functioned as they should, and the Apothecaries' endeavours to compensate for the genetic damage met only with failure.

Master of the careful ambush, the Black Guard deploys massed batteries of Thunderfire Cannons and Vindicators to annihilate its enemies in an instant.

The Aquila or Imperialis worn on the chest guard is red.

A white Low Gothic numeral is stenciled on the centre of the squad specialty symbol which indicates squad number.

The Black Guard's Chapter badge is a white circlet outlining a red roundlet which is bisected diagonally by a white lightning bolt. This is centred on a field of black. 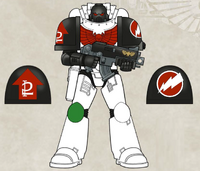 Insignium Astartes Chapter Colour Scheme of the Black Guard Space Marine Chapter
Add a photo to this gallery
Retrieved from "https://warhammer40k.fandom.com/wiki/Black_Guard?oldid=352955"
Community content is available under CC-BY-SA unless otherwise noted.