Warhammer 40k Wiki
Register
Don't have an account?
Sign In
Advertisement
in: B, Astartes Praeses, Imperium,
and 4 more
English

The Black Consuls is a Loyalist Space Marine Chapter that was a Second Founding Successor or Primogenitor Chapter of the Ultramarines. An ancient tome of knowledge known as the Mythos Angelica Mortis lists it as one of the 20 Chapters of Astartes founded to make up the Astartes Praeses -- an ever-vigilant Space Marine task force assigned to guard the regions of the Imperium surrounding the Eye of Terror.

Known as the least compromising of the Primogenitor Chapters, and brooking no deviation from the tenets laid down in the sacred Codex Astartes, the members of this Chapter, whose history is rich with battles won, are stern and uncompromising, with a history of xenophobia and unusually brutal combat tactics for an Ultramarines Successor Chapter.

The Black Consuls were recorded as having been annihilated at the Siege of Goddeth Hive in 455.M41 by elements of the Word Bearers and Iron Warriors Traitor Legions. At the same time, Imperial records indicated that a force of Black Consuls was still operating in the Jericho Reach as part of the Achilus Crusade.

Yet, it is very rare indeed for every one of any Chapter's battle-brothers to be present at any given battle, even if their homeworld is under attack. Individual squads were more than likely detached to perform special duties or serve as part of a composite Space Marine force attached to a larger Imperial Crusade.

Individual officers were also likely undertaking consular duties, conversing with their opposite numbers in brother Chapters in order to coordinate larger scale strategy. Some Black Consuls battle-brothers may have been undertaking duty in the Deathwatch, while in the case of the Black Consuls and other Primogenitors, individuals or small groups were probably engaged on a pilgrimage to the Shrine of the Primarch on Macragge.

Following the start of the Indomitus Crusade in the wake of the resurrection of the Chapter's Primarch Roboute Guilliman in ca. 999.M41, the Black Consuls were returned to full strength with the introduction of Primaris Space Marine reinforcements upon its homeworld of Cyclopia. They now serve as stalwart guardians of the Imperium in the Segmentum Pacificus.

As true sons of Roboute Guilliman, they have appeared numerous times throughout the long history of the Imperium, ever ready to stand in defiance of the enemies of the Emperor.

The battle-brothers of this Chapter were known to have made regular pilgrimages to the Shrine of the Primarch on Macragge before Guilliman's resurrection, and several past Black Consuls Chapter Masters were counted amongst the most valued counselors to the Master of Macragge.

The Black Consuls fought alongside their Progenitor Chapter on hundreds of occasions as well as other Ultramarines Primogenitor Chapters and many other Space Marine units.

The Black Consuls was originally a fleet-based Chapter whose space-borne fortress-monastery, the Noctis Obscurum, was destroyed nearly a millennium ago in the 40th Millennium by Drukhari saboteurs.

With the destruction of their star fort, the Black Consuls relocated groundside to the planet Cyclopia in the Calixis Sector of the Segmentum Obscurus and avenged their dishonour in a 300-standard-year xenocidal purge that spanned fifteen star systems and collapsed an entire sub-dimension of the Webway.

The Black Consuls' last recorded action before their supposed destruction was during the Siege of Goddeth Hive in 455.M41, where the Chapter was believed to have been annihilated when Chaos Space Marines of the Iron Warriors Traitor Legion detonated the hive's nucleonic stacks and vaporised much of the northern continent.

A definitive account of the Chapter's disappearance has yet to be chronicled, although the White Consuls suspected their brother Chapter might have been entirely wiped out by a substantial force of Word Bearers Traitor Marines. Even if the bulk of the Black Consuls were annihilated, some of the Chapter's battle-brothers undoubtedly survived, scattered across the width and breadth of the Imperium while assigned to various detached duties.

Imperial records show that a small force of Black Consuls were operating within the Jericho Reach following the launch of the Achilus Crusade in 777.M41. Due to the vagaries of Warp travel and communication, it took several solar decades for word of the Chapter's reported demise to reach those of its Astartes serving in this isolated sector of the galaxy's Eastern Fringe.

Upon hearing the foreboding news, the remaining Black Consuls took council and every battle-brother was allowed to speak. When they concluded the gathering they agreed that a single Astartes of their number would be despatched to investigate the truth of the Chapter's fate and bring back word to his brothers.

The remainder of the Black Consuls would continue to fight on, fulfilling their binding oaths to serve the crusade until the messenger returned. Nearly 250 standard years have passed, and still no word had reached the remaining Black Consuls as to the true fate of their Chapter in the early 9th century of the 41st Millennium.

The Black Consuls continued to fight the enemies of Mankind within the Jericho Reach as part of the Achilus Crusade, even as their numbers dwindled due to attrition.

While they had yet to learn of their Chapter's true fate, many battle-brothers of the Black Consuls were resigned to the fact that they might very well be the last of their Chapter. These warriors continued to fight to the death, determined that the history of their Chapter would be one that ended in glorious battle.

But since the events that occurred centuries ago during the Siege of Goddeth Hive, there were several unconfirmed reports of Black Consul's strike cruisers launching sudden, deadly interventions across the Segmentum Pacificus that had been filtering back to Terra.

During the recent events of Abaddon the Despoiler's 13th Black Crusade, the long-standing Fortress World of Cadia was destroyed. With Cadia's fall and the loss of the network of Necron-built Cadian Pylons that had long prevented the Eye of Terror from naturally expanding into the Materium, the Warp rift began to expand exponentially across the width of the known galaxy. This tear in reality, known as the Great Rift, effectively rent the Imperium in half.

The beleaguered forces of the Imperium increasingly found themselves overwhelmed as the power of Chaos and the xenos hordes grew unstoppable. Whole sectors of the Imperium lost contact with Terra, while others reported the onslaught of rabid greenskin hordes, aggressive T'au fleets or undying Necron hosts, seemingly driven to conquest in the face of the expanding Warp Storm fronts.

Heretic Chaos Cults and rogue psykers rose up in the billions, and every Imperial world now seemed set to burn in the fires of unending war. But all was not lost, for upon the Ultramarines' homeworld of Macragge during the Ultramar Campaign of ca. 999.M41, the genius of Archmagos Dominus Belisarius Cawl combined with the power of Ynnead, the Aeldari god of the dead, to resurrect the Primarch Roboute Guilliman from his millennia-long, deathless slumber.

Guilliman had anticipated the need for a new breed of hero for this, the darkest age in the Imperium's history. He knew that the galaxy would need warriors resilient enough to stand against the Forces of Chaos as the Imperium found itself poised on the brink of annihilation. To that end, for 10,000 standard years, Archmagos Cawl had been working upon improving the Adeptus Astartes themselves.

The result were the Primaris Space Marines of the Ultima Founding, a more powerful corps of transHuman warriors, more potent than even the original Astartes. New armies were raised in breathtaking numbers and new and terrible weapons were developed whose fury even the worshippers of the Dark Gods would be unable to withstand.

Gathering a great new armada, composed of elements of the Adeptus Custodes, the Silent Sisterhood and a vast war host of Primaris Space Marines from many newly founded Chapters, the lord commander of the Imperium launched his Indomitus Crusade.

Guilliman decreed that those Chapters who had suffered the keenest losses and the highest rates of attrition fighting against the myriad foes of Mankind would be the first to receive these newly created and genetically superior Astartes.

The Black Consuls were one such Chapter, and so their sorely depleted ranks were finally replenished with hundreds of newly-created warriors of the Ultima Founding.

Once again the Black Consuls were able to take the fight to the Great Enemy directly. This stalwart Chapter continues to steadfastly defend the Segmentum Pacificus even as the Great Rift unleashes new daemonic horrors upon Mankind.

The Black Consuls are well known as the least compromising of the Primogenitors and brook no deviation from the tenets laid down in their Primarch's epic tome. Their stern approach to the Codex makes them worthy inheritors of Roboute Guilliman's legacy.

The Black Consuls are notable for having the entire Chapter commence campaigns with a massed Drop Pod landing. Such an assault is a thing of terrible beauty, with a hundred or more Drop Pods descending like screaming harbingers of doom.

The Black Consuls primarily wear black power armour. The Aquila or Imperialis on the chest guard is gold.

A black High Gothic numeral, indicating squad number, is stenciled in the centre of it.

The Black Consuls' Chapter Badge is the profile of a large, white, left-facing eagle's head centred on a field of black. The style of the image is the same used by the White Consuls, although the colour scheme is completely different.

There seems to be some confusion in canon as to whether or not the majority of the Black Consuls Chapter was largely annihilated at the Siege of Goddeth Hive in 455.M41 and by whom.

Different sources report that the destruction of the hive city's nucleonic stacks were achieved by the Iron Warriors or the Word Bearers Traitor Legions, with a Word Bearers battleship being present as well; either the Crucius Maledictus noted above or the Infidus Imperator, the flagship of Kor Phaeron, which was believed destroyed at the Battle of Calth nearly 10,000 standard years before.

The 8th Edition Warhammer 40,000: Rulebook, however, mentions that the Black Consuls contributed four companies to the defence of Cadia during the 13th Black Crusade. This would mean that the Chapter either was NOT annihilated at Goddeth Hive or somehow reconstituted itself after the fact.

As the Chapter received reinforcements of Primaris Space Marines once the Indomitus Crusade began, it does seem that the Chapter had suffered extensive losses, though it had not been wiped out in its entirety at Goddeth Hive. 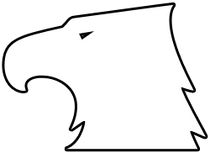 Chapter Badge of the Black Consuls 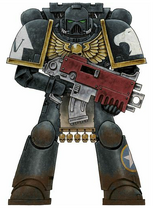