Warhammer 40k Wiki
Register
Don't have an account?
Sign In
Advertisement
in: B, Abhumans and Mutants, Imperium, Imperial Guard
English

Note: This article discusses material that was once considered canon but whose canonicity is now questionable.

Beastmen do not necessarily look alike, and different animal traits can manifest themselves in each individual, but apart from this form of phenotypical variation they are a genetically stable human subspecies, and are considered to be a form of Abhuman rather than an actual mutant.

The origin of Beastmen is unknown, though it is likely that they are the result of experiments in genetic engineering stretching back to the Dark Age of Technology before the birth of the Imperium of Man, who proceeded to breed true.

Other Imperial savants claim that Beastmen are Abhumans whose unusual forms were the result of exposure to the influence of the Warp but that the subspecies somehow managed to maintain an unusual degree of genetic stability across generations.

In temperament as well as appearance these Abhumans are often bestial, and possess a reputation for crudity, aggression and bad discipline. Starting in the late 30th Millennium, Beastmen were often recruited into the ranks of the Imperial Army as part of the massive galactic expansion of the burgeoning Imperium of Man during the Great Crusade, which began after circa 800.M30. Beastmen in the Imperial Army were regarded as useful if highly undisciplined warriors, and were ideal for suicidal assaults where brawn rather than tactical intellect was required.

Other Imperial troops disliked them intently as they were quite rowdy, unsanitary and generally unpleasant for baseline humans to deal with. Following the events of the galaxy-wide civil war known as the Horus Heresy, and the subsequent restructuring of the Imperial armed forces by the Ultramarines Legion Primarch Roboute Guilliman according to the dictats of his magnum opus, the Codex Astartes, Beastmen regiments were retained in the newborn Astra Militarum, where they were often led by the largest and most powerful of their kind, known as Packmasters.

Those Beastmen who have been introduced to the Imperial Cult by the missionaries of the Adeptus Ministorum possess a simple but fierce devotion to the Emperor of Mankind and regard Him as a vengeful god who demands tribute in the form of the blood of His enemies. These fanatically religious Beastmen are driven by the need to atone for their original sin of being mutants by fighting in service to the Emperor.

In recent centuries there has been a political shift within the Imperium and Beastmen are no longer seen in Imperial military service; no doubt the more Puritan elements of the Inquisition convinced the Departmento Munitorum that Beastmen could not be so radically different from the genetic human baseline without having been in some way affected by the taint of Chaos. In the late 41st Millennium, Beastmen are often now classified as mutants and as a result are the subject of severe Imperial persecution and have been placed on the "Register of Proscribed Citizens" (Class A-G worlds) by the Adeptus Arbites.

This effectively precludes them from settlement on, or transportation to or from, more than three hundred thousand worlds of the Imperium and forbids their conscription as part of an Imperial Tithe obligation. All of this is a sure sign that they may soon lose Abhuman status completely and be reclassified as true mutants. These creatures are often hunted down during anti-mutant pogroms conducted by the Adeptus Arbites on those worlds where populations of Beastmen are known to exist. This persecution, of course, has led many Beastmen to seek protection in the service of Chaos, thus in effect producing a self-fulfilling prophecy.

Beastmen are destined to become the outcasts of Imperial society. They are shunned and are often hunted down and killed as the Imperium has little tolerance for any who deviate from the perfection of the baseline human form in mind or body. Mutation is considered a heretical crime against the Emperor of Mankind by Imperial authorities because of its connection to sympathy with or worship of Chaos.

As creatures of the Warp, these bestial warriors often fall to the service of Chaos as members of the Lost and the Damned as a means of escaping the persecution of Imperial society or are lulled into the service of one of the four Chaos Gods due to their inherent nature as creatures of Chaos. The Ruinous Powers look upon Beastmen with special favour, and Chaos "gifts" are often granted to those Beastmen who become Champions of Chaos even though they may serve no specific Chaos God. Champions who do follow Khorne, Nurgle, Slaanesh or Tzeentch often benefit from the relationship more readily than human or other Chaos Champions, because they are closer to the true nature of Chaos.

True to the Changer of the Ways, the Beastmen of Tzeentch, known as Tzaangors, are spectacularly variable -- bright of colouration and sharp of intellect. Their beaks clack as they chant blasphemous refrains in their Dark Tongue, gimlet eyes glowing in their aquiline skulls. Their hunger for knowledge stems from a desire for power, and even in battle they look to transcend their base existences by seeking out arcane artefacts and priceless texts.

In serving their Sorcerer masters, they may earn the chance to elevate themselves above their earthly stations, but in truth such occasions are rare, for a streak of cruelty lurks within the warlike soul of every Tzaangor. When given the opportunity, they will take their ire out on those who oppose them in inventive displays of blade-work -- or, when they put aside their artistic pretensions for the gratification of raw brutality, a gory display of violence.

Those Beastmen who serve the Blood God Khorne are known as Bloodgors or Khorngors. The signature of Khorne is writ clearly upon the form of the Blood God's Beastmen. They have canine heads or faces, fierce snapping jaws, and teeth which drip with rank saliva. Their skin or fur is usually red and their eyes are all white with red pupils.

Khorngor Champions often have fur which is especially impressive, either bright red, black with red flecks, or a strange metallic brassy colour. If the Beastmen has horns these may be twisted into the shape of the skull-like rune known as the Mark of Khorne. The same rune is often painted or burned onto their skin or fur, and can be tattooed onto their exposed foreheads. Beastmen of Khorne always fight in their own units, although they can be led by a Beastman Champion so long as he does not follow any other Chaos God.

These foul creatures, enslaved to the worship of Khorne, populate many planets within the Eye of Terror. Dim-witted, cruel, unruly and easily startled, they are always keen to kill for their masters -- who are careless of their lives, sending Packmasters to whip them towards the enemy's guns.

Beastmen of Khorne hate enemies who are mortal followers of Slaanesh, including Beastmen who follow that patron. They also hate all enemy Chaos Sorcerers. They do not hate enemy Shamans who also follow Khorne, as they cannot cast sorcerous spells but have the power to nullify psychic abilities. Their hatred only applies to enemy troops, never to allies, even if they are followers of another Ruinous Power.

The Pestigors, the Beastmen of Nurgle, have blistered and broken skins, often red with cracked flesh and sores which have been given to them by a generous master. Their fur is matted and coarse, and their bodies are riddled with all kinds of disease.

Yet they retain the morbid vigour that characterises their master so their afflictions in no way mar their battle-worthiness. The Mark of Nurgle is carved into their armour, daubed upon their clothes, and sometimes etched onto their skin by the path of disfiguring disease. Many Beastmen of Nurgle carry Nurgle's Rot, although thanks to their loyalty to Grandfather Nurgle, that terrible arcane disease will not affect them.

Beastmen of the Chaos God Slaanesh, known as Slaangors, have white or near-white fur and pale or pastel skins. Their eyes are green and are sometimes saucer-like in a similar way to those of the Daemonettes. The Mark of Slaanesh appears somewhere on them, painted onto their hides or carved into their armour, a bracelet or neck collar. Many of Slaanesh's Beastmen have the head or horns of a bull (known as Bovigors) just like the Greater Daemon of their patron god.

To the fearful eyes of humanity all Beastmen appear the same -- an unruly mass of flesh, fur and teeth. In their ignorance they can discern no distinguishing characteristics that mark the different physical and social types, nor any kind of social hierarchy apart from the simple supremacy of the strongest. This is a mistake often made by humans, whose judgement of Beastmen is overwhelmed by the brutal power and savagery of these creatures. In fact, Beastmen society is very precise and ordered, and there are several distinct levels of class and rank.

An unusually large and aggressive strain of giant Beastman, Minotaurs are comparable in physical size and strength to an Ogryn. These creatures are massive, bull-headed monstrosities that constantly hunger for hot blood and red meat. Often growing to twice the height of a man and far greater in muscular bulk, their thick-skulled heads are broad and ugly, and their horns can eviscerate with a single thrust.

Minotaurs are possessed of a terrible hunger for flesh, particularly the flesh of Mankind. Yet it is not the gnawing hunger a mortal feels when deprived of sustenance, but a deep thirst for the unholy exhilaration the Minotaurs experience when they consume the flesh of their enemies. In this state they join with the power of the Chaos Gods and share in part of their unholy glory.

Beastmen were initially part of Warhammer 40,000: Rogue Trader 1st Edition's Imperial Guard armies. They could later be used in Imperial Guard armies with the use of the Homo Sapiens Variatus Doctrine, and in the army list for the The Lost and the Damned, though these rules are now obsolete. The Beastmen were originally part of the Warhammer 40,000 universe because, like many of the other factions, they were direct ports of Warhammer Fantasy 's Beastmen. On Warhammer Fantasy 's Warhammer World, the Beastmen are mutants born as the result of Chaotic influence upon their parents. In later editions of the game, Games Workshop has sought to take the Warhammer 40,000 universe farther away from its Warhammer Fantasy roots and create more distance between both intellectual properties, resulting in the removal of Beastmen from the game; the same impulse was responsible for the removal of the Squats as a playable race in the Warhammer 40,000 universe because Games Workshop no longer felt that a species of "Space Dwarfs" was appropriate for their science fiction universe.

However, Games Workshop eventually decided to bring the Beastmen back into Warhammer 40,000, with a mention in a list of recognised Abhuman strains in the Warhammer 40,000 6th Edition Rulebook. This was eventually followed by the release of rules and models for using Tzaangors as part of the 7th and 8th Edition Thousand Sons army lists, and a Beastman special character, Gor Half-Horn, for the 2017 reboot of Necromunda. 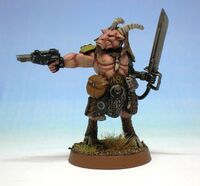 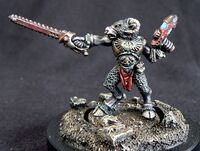 Imperial Army Beastman during the Great Crusade, armed with a Chainsword and a Plasma Pistol

A Khorngor - Beastman of Khorne 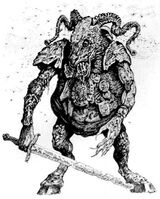 A Pestigor - Beastman of Nurgle

A Slaangor - Beastman of Slaanesh

A Tzaangor - Beastman of Tzeentch 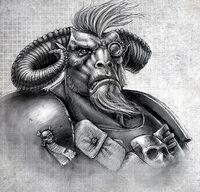