Warhammer 40k Wiki
Register
Don't have an account?
Sign In
Advertisement
in: B, Ork, Ork Technology,
and 3 more
English

A Battlewagon is a catch-all term used for any type of Ork assault tank and heavy armoured troop transport. The term Battlewagon seems to refer overall to a category of large Ork armoured vehicles. A Battlewagon can be wheeled, tracked or a combination of the two and is used in many battlefield roles. It always carries a large complement of weapons.

Sometimes these armaments are just Big Shootas, while on other vehicles they are large Killkannons. Battlewagons possess thick armour plating, multiple turrets and death rollers or rams. They also carry mobs of Ork Boyz, either internally or clinging onto its many handholds.

Ork Battlewagons rumble to war on a collection of tracks, tyres and massive spiked rollers. Whether lumbering gun-fortresses, bright red speedsters or gaudy rust buckets smeared with Ork glyphs, Battlewagons are massive slabs of motorised junk built to carry big mobs of Greenskins into battle. No matter a Battlewagon's individual peculiarities, all fulfil the essential role of an armoured attack vehicle for Ork forces.

A solid wedge of these mighty vehicles can provide a warband with a (somewhat rusty) mailed fist that can be driven down the throat of the enemy. With gunz booming and Deff Rollas coated in mud and gore, Ork Battlewagons carve a path of bloody ruin through the foe while their Ork passengers blaze away at the dazed survivors, bellowing "WAAAGH!" at the top of their lungs.

Ork Battlewagons are as diverse in construction and weapons complement as the Greenskins who create them. A Battlewagon always possesses a heavy chassis, sometimes salvaged from other suitable vehicles such as the Imperium's tanks or heavy armoured transports. Others will be custom-built vehicles created from scratch by an Ork Mek and his assistants.

Like other Ork vehicles a Battlewagon continues to be kustomised and grows to become an ever larger contraption as its owners add more weapons, extra fighting gantries and new engines, until a Battlewagon has grown into a true Battle Fortress. A Battle Fortress is a massive Battlewagon, expanded to the size and armament capacity of an Imperial Guard super-heavy tank. Such vehicles are favorite mounts for the most powerful of Ork Warbosses.

There is no such thing as a standard Battlewagon, and there exist many named sub-types among the Ork forces. Titles such as Lungbursta, Gobsmasha, Krusha, Bonecruncha, Gorespeeda and Dakkawagon are used by the Orks to describe each kustomised Battlewagon's specific role. The Lungbursta and Gobsmasha are armed with large, noisy kannons whilst the Krusha is outfitted with a spiked death-rolla on the front and drives into the heart of the enemy, steamrolling over enemy infantry. The Gorespeeda is a popular vehicle with Speed Freeks and Evil Sunz, maximising its transport capacity to deliver mobs of Boyz into the thick of the fighting.

A Battlewagon armed with a Supa-Kannon sacrifices all its other weaponry to mount this huge artillery piece. Most often this weapon is nothing more sophisticated than a looted Imperial Earthshaker Cannon. Among the Ork klanz, the Goffs and Evil Sunz dislike the very idea of artillery and rarely make use of a Supa-Kannon, preferring weapons that allow them to more directly enter the fray. For their part, the Bad Moons, Blood Axes and Deathskulls greatly enjoy the sheer power of artillery pieces and have been known to unleash the power of a Supa-Kannon upon the foe.

Some Meks kustomise a Battlewagon chassis to carry a large Lifta-Droppa. In addition to its use moving heavy machinery about, demolishing buildings and clearing scrap, the Lifta-Droppa makes use of an unknown tractor-beam technology to pick up and move objects around the environment with anti-gravitic ease. Battlewagons outfitted with a Lifta-Droppa are known as Liftwagons. The Lifta-Droppa is powered by an "atom-smasha" reactor, which Meks take great glee in overloading, often with spectacular and deadly results. 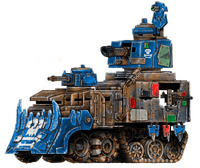 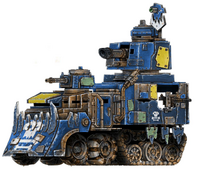 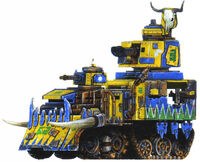 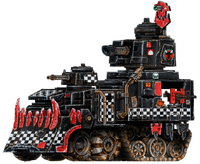 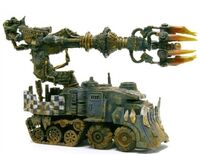 An Ordo Xenos Departmento Analyticus Record of an Ork Battlewagon