Battlefleet Gothic: Armada is a real-time strategy video game adaption of the classic tabletop game with the same name developed by Tindalos Interactive and published by Focus Home Interactive on April 21, 2016 for Microsoft Windows.

The game takes place during Abaddon's 12th Black Crusade, also known as the Gothic War, where players must defend the Gothic Sector from the Orks, Chaos, Eldar Corsairs and traitorous factions of the Imperial Navy. Later downloadable content added two other factions, the T'au and the fleets of the Space Marines, to the game.

Players take control of 4 factions, including the Imperial Navy, Chaos Fleet, the Eldar Corsairs and the Ork Freebooterz. Each faction possesses their own unique warships and favoured playstyle. Players can also customise their warships' weapons, crew, subsystems, and Void Shields.

A level up system is in place where players gain experience from battles in which they earn more experience when they win but gain less if they lose. After gaining specific levels, players access better ship classes, various equipment upgrades, and crewmen.

In order for the players to customise their ships they must first earn renown points before they can buy upgrades. Every ship in the game possesses a limited number of slots for upgrades, with the exception of the Orks'.

In fact, Imperial Navy armsmen turned Traitor were responsible for the murders. Now servants of Chaos, they next sought to ambush the Imperial boarders. The entire boarding party was slaughtered to a man in the unexpected assault, while Captain Spire's ship came under attack from a Chaos-controlled defence platform. After destroying the defence platform the Chaos forces sent Escort ships to eliminate the Imperial threat, but Captain Spire and his valiant crew destroyed them first.

After eliminating the Escorts, a massive Chaos Warfleet arrived under Abaddon the Despoiler's command. Captain Spire attempted to warn Battlefleet Gothic's Fleet Command of the Chaos threat, but unfortunately, the enemy forces jammed Spire's communications, and the only way to send a warning was to risk an emergency Warp jump close to a star.

The Imperial ship successfully escaped to warn Fleet Command of the impending danger. Captain Spire's actions were then closely scrutinised and he was put on trial by Inquisitor Horst to determine if he was telling the truth about the encounter, or deceiving Fleet Command because he had been corrupted by the influence of Chaos.

Spire was exonerated at the trial and promoted to the senior rank of Admiral by Lord Admiral Cornelius von Ravensburg. Spire is next sent on several missions that prove crucial to defending Imperial worlds from rebellions and an Ork incursion. Finally, Spire is tasked with repelling a Chaos invasion of the entire sector, leading into the final events of the Gothic War and the Battle of Schindelgheist that brought that conflict to an end.

During the course of the single-player campaign, skirmish and multiplayer modes, a variety of game types are possible:

The game has received positive reviews and has a score of 79% on Metacritic. IGN awarded it a score of 7.1 out of 10, saying "Battlefleet Gothic: Armada's promising space tactics are bogged down by excessive obscure details." PC Gamer awarded it 80%, saying "A tubthumping tribute to the 40K universe, with perfectly grim design. Multiplayer definitely needs work on its balance though." 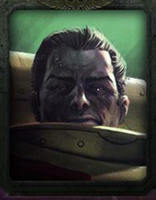 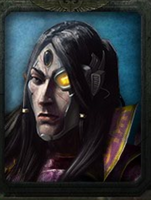 Prince Eldrathain
Add a photo to this gallery