Bastion-class Commerce Vessels belong to the xenos species known as the Demiurg, a mercantile race allied to the Tau Empire. More common than the larger Stronghold-class starship also deployed by the Demiurg, Bastion-class starships are nonetheless only occasionally sighted in the great vastness of the Wilderness Space along the Eastern Fringe of the galaxy.

Bastion-class vessels appear to be more heavily configured for asteroid mining than the stately Stronghold, which is known to function as a factory/processor ship for the Demiurg mercantile clans. Presumably resources and finished goods are exchanged between these vessels but there are no eye witness reports of such available to the Imperium of Man. Scattered reports by Rogue Traders operating on the eastern rim of the galaxy indicate that a Bastion-class vessel is crewed by a Demiurg sociopolitical unit known as a "Brotherhood" and that Stronghold-class starships serve as homes to typically 2 or 3 Brotherhoods. It is possible that Strongholds and Bastions form some type of extended affiliation but if this is the case each group must be widely scattered in different star systems many light years apart. The Imperium as yet knows next to nothing about the Demiurg's culture or societal organisation. The one exception to this is when the Demiurg muster for war, which is when two or three Bastion-class vessels gather to protect each Stronghold.

As warships, Bastions compare to Imperial Cruisers in most respects, though impressive Lance turrets and the firepower of its weapons batteries at close range make them a thorny prospect for many capital class vessels of even larger size to face. As with the larger Stronghold-class, Bastions have the capacity for launching mining craft and prospector probes reconfigured as Attack Craft and spatial torpedoes.

This class of starship also uses an electromagnetic Bussard Scoop to collect stellar hydrogen which it projects through the core of the ship for propulsion, much like its Stronghold-class counterpart. This system also provides the source of fusion power for the laser-based cutting beam the vessel uses to open up asteroids for mining or for puncturing enemy ships' hulls as the circumstances dictate.

A Bastion-class Commerce Vessel is armed with weapons batteries on its port, starboard and prow sides, Lances to port and starboard, and a laser cutting beam projector on the prow. Its dorsal section maintains launch bays for up to two squadrons of mining craft that can be reconfigured as fighters, bombers, and assault boats or can be doubled up to serve as four Torpedo silos. 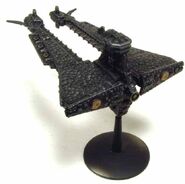 Bastion-class and Stronghold-class Demiurg starships in formation
Add a photo to this gallery
Retrieved from "https://warhammer40k.fandom.com/wiki/Bastion-class_Commerce_Vessel?oldid=309382"
Community content is available under CC-BY-SA unless otherwise noted.