Warhammer 40k Wiki
Register
Don't have an account?
Sign In
Advertisement
in: B, Imperial Guard, Imperial Vehicles,
and 8 more
English

The Basilisk is the standard self-propelled artillery piece of the Astra Militarum in the 41st Millennium, and is also the most common artillery piece used by the Imperial armed forces across the galaxy. The Basilisk is produced in vast numbers on all of the known Forge Worlds in the Imperium, and almost every Astra Militarum regiment maintains several in their arsenal.

The Basilisk is used to provide direct artillery support for other Imperial units that are fighting on the frontlines. Unlike other Imperial Guard artillery units such as the Griffon and the Bombard, the Basilisk is capable of leveling its weapon at the ground and can directly engage enemy units. The most common role for the Basilisk is the indirect bombardment of enemy units and fortifications, and it is usually held near the rear of the frontline alongside the Medusa and Manticore mobile artillery pieces.

Of all the Astra Militarum's ordnance units, the Basilisk is the most numerous. Like many self-propelled artillery pieces, Basilisks can keep pace with infantry advances, ready to unleash its payload at a moment's notice. Such devastating weapons are not intended to perform the same battlefield role as main battle tanks, however, their lack of ablative armour and exposed crew carriages making them too vulnerable to lead assaults. Instead, Basilisks are fielded in a support role to the front-line regiments.

Basilisks can be redirected, reloaded and fired relatively swiftly. The design of the Earthshaker Cannon allows the weapon to be elevated to a steep enough angle for it to fire its shells high over the battlefield and onto concealed enemy targets. Basilisks can therefore deploy out of harm's way where the enemy is powerless to retaliate. The powerful shells fired by the Earthshaker Cannon are capable of smashing apart the enemy lines with ease and are designed to cause catastrophic damage at the impact zone. Targets at the epicentre of such a detonation are immolated immediately, while those in the vicinity are pulverised by the deadly shock wave. The unmistakable shriek of the Basilisks' incoming ordnance is rightly feared by the enemies of the Emperor.

"When your company has a Basilisk, every problem looks like a crater."

The Basilisk was first used by the Imperium during the Great Crusade in the late 30th Millennium, where it was fielded in great numbers by the Imperial Army and Mechanicum, and in smaller numbers by the Space Marine Legions. The Basilisk artillery pieces used by the Space Marine Legions were usually crewed by the Legion's mortal personnel, but they were  also crewed at times by the Space Marines themselves. The Basilisk, along with the Medusa, saw only limited usage by most of the Space Marine Legions, as the Astartes preferred the more versatile Whirlwind artillery tanks, which were based upon the Rhino chassis and thus were easier for the Legions to repair. There were some Legions that made heavier use of the Basilisk, such as the Iron Warriors and Imperial Fists Legions, who specialised in conducting or defending against siege warfare. During these ancient times the Basilisk could be outfitted in much the same way it is in the late 41st Millennium, but the artillery piece could also take on additional upgrades and attachments which have long since been lost to the Imperium.

The Basilisk's main weapon is an Earthshaker Cannon, a 132 millimetre gun that is capable of firing its shells over 15 kilometres at a velocity of 814 metres-per-second, and is fully capable of destroying enemy tanks and fortified structures with a direct hit. The weapon usually fires High Explosive shells but is also capable of firing Incendiary Shells, Smoke Shells, and Illumination Shells. The tank retains the use of the Chimera chassis' hull-mounted Heavy Bolter, which the vehicle's commander can use when under close-range enemy infantry attack.

The Basilisk can also be outfitted with several enhancements including an enclosed crew compartment, Camouflage Netting, Extra Armour Plating, track guards, a Hunter-Killer Missile Launcher, improved communications equipment, rough terrain modifications, a Pintle-mounted Heavy Stubber or Storm Bolter, a Searchlight, and Smoke Launchers. During the Great Crusade and Horus Heresy eras, Basilisk artillery pieces could be outfitted with other upgrades such as an auxiliary drive system and Pintle-mounted twin-linked Bolters. The Basilisk was sometimes also used as a command vehicle for artillery formations.

A Basilisk of the 17th Tallarn Regiment, deployed during the Taros Campaign

An Armageddon Pattern Basilisk of the 331st Tallarn Regiment, deployed during the Taros Campaign 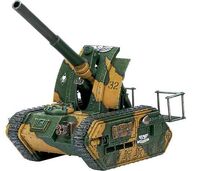 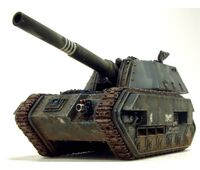 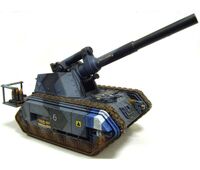 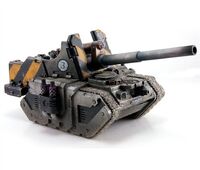 An Iron Warriors Legion Basilisk during the Great Crusade
Español
Community content is available under CC-BY-SA unless otherwise noted.
Advertisement