"We do not belong on the ground. Our home is the sky, as the enemies of the Tau Empire know to their cost."

The Barracuda air superiority fighter is the most common atmospheric combat aircraft used by the Tau Air Caste. Faster than the Imperial Navy's Marauder bomber, but lacking the high maximum speed of the Thunderbolt or Lightning fighter, it makes up for this lack with its sophisticated electronic systems and the natural talents of its Tau Air Caste pilots. In a dogfight, the Thunderbolt and the Barracuda are very closely matched, with the Thunderbolt having the edge in speed, and the Barracuda having the greater manoeuverability. Imperial pilots often have a hard edge of combat experience that the pilots of the Air Caste find hard to match, though the superior handling and armament of the Barracuda often proves decisive in encounter between Tau and Imperial combat aircraft.

Utilising the natural advantages of its Air Caste pilots, the Barracuda excels in its main role as an air-to-air combat interceptor. Barracuda are commonly used by the Tau to intercept enemy fighter squadrons that are assaulting Tau ground forces, attack enemy air transports and their fighter escorts on their way to the front, and escort Tau transports such as Orcas and Mantas as they deploy Hunter Cadres. Barracudas are also commonly tasked with carrying out ground attacks in direct support of Hunter Cadres and providing overall air support for Tau ground forces in combat. Barracudas often strafe and harass enemy troop movements and also disrupt enemy supply lines and bases, which was common during the Taros Campaign. Barracudas are also capable of operating in the hard void of space, where they fulfill the Attack Craft role for the Tau Navy. Barracudas can be transported through interstellar space via larger Warp-capable carrier vessels such as the Custodian, Protector, and Emissary-class starships.

The Tau forces deployed to seize control of the former Imperial Mining World of Taros during the Taros Campaign in 998.M41 included a large contingent from the Air Caste which formed an integral part of the Tau's overall strategy for securing victory. Winning the air war against the Imperial Navy was vital to the Tau's plans, and Barracudas and Thunderbolts fought daily for control of the skies. Flying from well-concealed desert air bases on the Iracunda Isthmus, the Barracudas eventually won the battle. As well as engaging in dogfights, the Barracudas also targeted the Imperial Guard's supply columns, operating in unison with infiltrating Pathfinder teams to destroy Trojans and the supplies vital to keeping the Imperial Guard fighting. Due to these severe losses, Imperial troops on the frontlines quickly began to run out of basic supplies such as water, causing much of the Imperial offensive to grind to a halt. Imperial Guardsmen on the ground also faced the ever-present danger of low-level Barracuda strafing attacks where the Tau fighters would commonly slip low over the desert, hugging valleys and ridge lines only to rise suddenly in a whirl of firepower that raked the sand and sent everybody diving for the nearest cover. Although exact figures are unknown, it is thought by the Imperial Navy that the Tau Air Caste deployed an estimated 150 aircraft on Taros.

The most deadly Barracuda pilots encountered so far by the Imperium are those whose squadron name is believed to translate into Low Gothic as "the Gift of Silence." This single Barracuda squadron has thus far accounted for the loss of 27 Imperial bombers and 18 interceptors. It has also claimed an Imperial Guard Tetrarch Heavy Lander as it made planetfall, resulting in the loss of an entire Imperial Guard regiment.

Barracudas have also been fielded in large numbers in the Canis Salient of the Jericho Reach, to try and and achieve air superiority over the many conflict zones against Imperial forces in the Achilus Crusade.

A Barracuda is armed with a nose-mounted, pilot-aimed Ion Cannon. This is the aircraft's primary weapon for use in dogfights, backed up by two Drone-controlled Burst Cannons in the wings which can also be used as effective anti-infantry weapons during strafing runs. For ground attacks, the Barracuda is armed with wing-mounted Missile Pods built into the chassis and can also carry an additional armament of up to four Seeker Missiles which are not controlled by the pilot, but by a Marker Light operator on the ground. Barracudas are also equipped with a Targeting Array as standard for improved accuracy. Different Air Caste Septs have been identified operating slightly different versions of the Barracuda. Some are equipped with Blacksun Filters for night-fighting, whilst others with Disruption Pods and Decoy Launchers for additional protection.

All Tau pilots are derived from the Tau Empire's Air Caste. Air Caste members live almost exclusively off-world in orbital space stations and habitats where, over time, their long-term exposure to lower gravity has affected their physiognomy. This means that even when operating in a gravity well, the pilots of the Air Caste have developed superior three-dimensional awareness and marginally better tolerance for high rates of acceleration and extreme gravitational effects at high speeds than that of their human opponents. Physically, this makes a Tau pilot naturally better suited to the rigours of air-to-air combat than a human pilot, able to make tighter turns and hold them longer while being capable of pushing the gravity envelope further.

The Barracuda's design is similar to the general design of most Tau aircraft, being low and thin in height with a relatively large wingspan that deploys weapons such as Missile Pods and mounted Drone-controlled Burst Cannons. The aircraft's armour is made of the same unknown nano-crystalline alloy used in many other Tau vehicles and aircraft. The shape of the Barracuda's airframe is highly aerodynamic, which makes it able to perform greater feats of manoeuverability that Imperial aircraft simply cannot match. While this leaves it more fragile than its ground attack counterparts the Sun Shark and Razorshark, it allows it to engage in aerial duels with enemy fighters very effectively. The Barracuda also features advanced electronic systems that achieve faster target locks than the Imperial Thunderbolt. The aircraft's greater manoeuverability is combined with the natural adaptation of Air Caste pilots to produce an aircraft that is extremely nimble and agile in flight, providing it an often decisive advantage in aerial dogfights. The design of the Barracuda also includes a built-in escape pod. In the event that the aircraft sustains mortal damage, the pilot can eject. The entire cockpit capsule disconnects and provides limited anti-gravitic mobility that can return the pilot safely to the ground. However, once on the ground, the pilot must look to his own resources to make good his escape and avoid capture or death at the hands of the enemy's ground forces.

Barracudas can also be equipped with any of the following Tau vehicle support systems:

A Barracuda shoots down a Lightning fighter

A Barracuda shoots down an Ork Fighta

A pair of Barracudas hunt down Ork Fightas

A pair of Barracudas flying over a Tau city 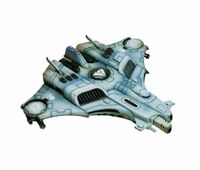 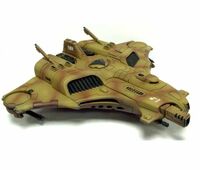 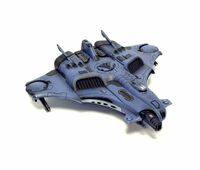 Starboard, dorsal and front schematics of a Barracuda 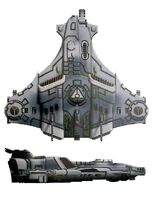 A Barracuda of Air Cadre El Ao'rata, from the Ksi'm'yen Sept 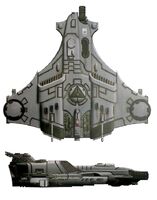 A Barracuda of Air Cadre El'Aouvah, from the Ksi'm'yen Sept 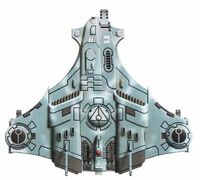 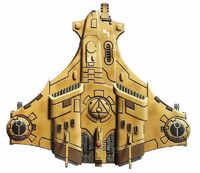 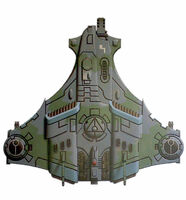 A Barracuda attached to Hunter Cadre El'Corri during the Second Battle of Nimbosa City. It was shot down on the third day of fighting. 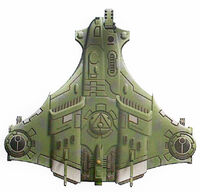 A Barracuda deployed against Ork warbands in the F'irios Sept 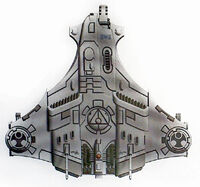 A Barracuda of the D'yanoi Sept; deployed against the Tyranids on the arctic world of Ik'yabar 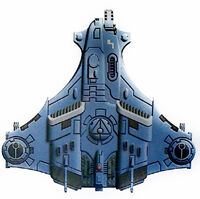 A Barracuda of the Dal'yth Prime defence force
Add a photo to this gallery
Retrieved from "https://warhammer40k.fandom.com/wiki/Barracuda?oldid=297934"
Community content is available under CC-BY-SA unless otherwise noted.