Warhammer 40k Wiki
Register
Don't have an account?
Sign In
in: B, Eldar, Eldar Technology,
and 2 more
English

A Banshee Mask is a war helm worn by the Howling Banshees Asuryani Aspect Warriors in battle. Each Warrior Aspect has its own distinctive helmet, and within each shrine the helmet may vary in form slightly, with correspondingly more elaborate versions for the shrine's Exarchs.

A standard Howling Banshees Aspect Warrior's Banshee Mask is tall in profile, with long flowing hair spilling from the top of it like a lion's mane.

Their distinctive design contains psychosonic amplifiers that magnify the keening battle screams of their wearers into mind-destroying shockwaves. This inflicts severe damage to the central nervous system of an Asuryani warrior's foe, inspiring a feeling of mortal terror and causing momentary paralysis.

Gift of the Crone Goddess

The banshee is a harbinger of woe in ancient Aeldari legend and mythology, whose cry is said to herald such ill fate that it can even wrench a soul from its Spirit Stone, before casting it into depths of the Immaterium; there to be plaything of Daemons.

It is fitting then that the most feared of all the Craftworld Aeldari Aspect Warriors, the Howling Banshees, draw inspiration from this unearthly creature and take on its name; and it is from the scream of the creature that is the mythological source of their most potent weapon: the Banshee Mask.

In Aeldari mythology, the Crone Goddess Morai-Heg sought to partake of the wisdom contained in her divine blood. Knowing there was only one with the power to harm a god, she sent her daughters to haunt their father Khaine's steps with their piercing screams.

The infernal noise drove the war god Khaela Mensha Khaine into a bloody rage that saw his mind begin to unravel. Promising an end to this curse, the Crone Goddess bade Khaine to cut off her hand that she might drink deep from her own veins. With this deed, Morai-Heg gained the knowledge of blood, and the Aspect of the Banshee was granted to Khaine in return.

The concept of the war mask is at the core of the Path of the Warrior. Aeldari, being more highly evolved than other, "lesser" species, feel all sensations more keenly than do Humans, T'au or Orks. This allows them to embrace positive emotions, such as love, with a greater fervour than members of these other species can conceive, but it also heightens their experience of darker feelings, such as rage, fear and grief.

The act of killing is likewise amplified. Where a Human can kill another being with little guilt or remorse, for an Aeldari to do so is an act that can endanger their very soul and risks drawing the dark attentions of She Who Thirsts. While their sensation-craving Drukhari cousins draw pleasure from bringing death, the Asuryani prefer to separate their souls from the act of murder, and so they don their "war masks" before combat.

The war mask is as much a metaphysical concept as a physical artefact. When Aspect Warriors prepare for battle, they ritually take up their war masks, adopting another persona, one at ease with the blood that is soon to flow, and temporarily abandoning the person they are away from the shrine. They embrace the savage instincts that lurk in the heart of every Aeldari, and prepare to bring death in the name of the Bloody Handed God, Khaine.

As they kill, it is their warrior persona who risks feeling the touch of She Who Thirsts, and when the battle is done and the foe vanquished, the Aspect Warriors remove their war masks and return to the person they were before, the bloody acts they have committed more distant dream than fresh memory.

In this way can the Asuryani eventually move on to other Paths without bringing with them the trauma of the acts they have performed and atrocities they have committed.

Some Aspect Warriors who cleave too close to the Path of the Warrior find that their war mask and true persona become one and the same. It is these lost souls who don the most ancient and potent wargear of their shrines and become Exarchs, training others in the arts of war and leading them on the battlefield.

Howl of the Banshee

The war masks worn by Howling Banshees are remarkably simple in function, but devastating in effect. Built into their helmets are potent psychosonic amplifiers, linked to a central mouthpiece that is permanently fixed into a terrifying snarl.

In their traditional bone-white garb, they appear like the banshee of ancient Aeldari myth, a pale, wraithlike figure that chills the blood with its cry of despair and pain.

Alongside the martial skills that the Banshees learn during their time in the Aspect Shrine, they are also taught how to channel the grief and rage that they experience in killing into a terrifying shriek. Imbued with psychic dread and channelled through the amplifiers, the Banshees' scream becomes a weapon as effective, in its way, as their shuriken pistols or power swords.

As the Banshees charge into combat, their howls combine to create a barrage of psychosonic force known to the Aeldari as the "Scream that Steals." This combination of noise and esoteric energies not only temporarily deafens their enemies, but also floods their nervous systems with psychic power -- not enough to risk opening them up to possession by beasts of the Warp -- but enough to temporarily disorient or even paralyse them.

By the time they recover their senses, the Howling Banshees are amongst them, bringing death with shuriken and energy-wreathed blade. In this way do they emulate the mythological horror from which they take their name, as the sound of the banshee's howl presages doom for all who hear it. 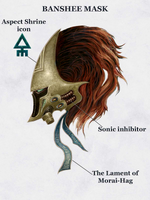 A profile view of a Howling Banshee Mask
Español
Community content is available under CC-BY-SA unless otherwise noted.