Warhammer 40k Wiki
Register
Don't have an account?
Sign In
Advertisement
in: B, Imperial Guard, Imperial Vehicles,
and 5 more
English

Yet the Banesword excels at utterly obliterating both vehicles and fortifications. Walled strongpoints and arrayed enemy armour can prove insurmountable to an Astra Militarum offensive, regardless of how many foot-slogging troops are marched against them. But a single Banesword can level such obstructions with ease. With a handful of shots, a Banesword's Quake Cannon tears gaping rents in the most redoubtable defensive lines. Imperial infantry and close-quarters attack vehicles are then free to pour into the breach and eradicate what enemies are left alive. Furthermore, the extreme range of the Banesword's armament allows it to perform this function before the opposing forces can even return fire.

The Banesword is one of the newest variants of the Shadowsword. The commanders and tacticians of the Imperial Guard had long requested a super-heavy tank which could destroy fortifications like the Shadowsword, but which would possess better mobility and a higher rate of fire. The Tech-priests of the Adeptus Mechanicus eventually managed to fulfill this long-standing request by swapping the Shadowsword's Volcano Cannon for a Quake Cannon, both weapons normally found on Titan weapon hardpoints. The Quake Cannon is one of the largest artillery pieces in the Imperium of Man's arsenal, and by wedging an armoured casemate specially designed to dampen the Quake Cannon's massive recoil into the Shadowsword's chassis, the most brutally effective siege tank was born.

Like the Basilisk, the Banesword's place on the battlefield is in the rear areas, obliterating enemy fortifications with long range fire. Like the Basilisk, the Banesword can also be pressed into the frontlines. The Banesword's armoured mass and secondary armament of three sets of twin-linked Heavy Bolters and two Lascannons allow it to perform much more efficiently than a battery of Basilisks when fielded in this way. In addition, the sight of a super-heavy tank rumbling forward and blasting the enemy into oblivion is always a potent morale bolster for the Guardsmen fighting alongside it.

The Banesword dispenses with the most hampering disadvantage of the Shadowsword, namely having to disengage its engine before firing. However, like all super-heavy tanks based on the Baneblade chassis, it suffers from poor top speed and maneuverability, and the Quake Cannon's fixed setting requires the Banesword to be bodily aimed at its intended target. Additionally, the Quake Cannon is inefficient against enemy Titans, for unlike the Lance beam from a Volcano Cannon, or the massive plasma burst from a Plasma Blastgun, the massive shell will be stopped by any remaining Void Shield, requiring the target's shields to be taken down before the shot is taken with any hope of success.

The Banesword's main weapon, known as a Quake Cannon, is one of the most powerful siege weapons available to the Imperium, and is the scourge of enemy fortresses across the galaxy. Though primarily a siege gun of formidable power, suited to wrecking fortifications, there will also be little left of any war machine that happens to be in a Quake Cannon's sights. As a result of this powerful main weapon and its heavily armoured exterior, the Banesword is considered the most potent siege tank ever deployed by the Imperial military. Many Imperial commanders would willingly exchange two full regiments of infantry for a single Banesword, such is the reputation of this vehicle. The Banesword is also armed with a hull-mounted set of twin-linked Heavy Bolters, and two sponson-mounted Heavy Flamers with top-mounted sponson Lascannons. The Heavy Flamers can be switched out for Heavy Bolters when needed. The sponson mounts can be replaced with Extra Armour Plating for added protection or an additional two sponson mounts identical to the first can be added, giving the tank two more twin-linked Heavy Flamers or Heavy Bolters and top-mounted Lascannons. The vehicle can also be equipped with a Hunter-Killer Missile Launcher, a Pintle-mounted Heavy Stubber or Storm Bolter, a Searchlight, or Smoke Launchers.

After a new Banesword is manufactured on an Adeptus Mechanicus Forge World and put into service with an armoured regiment of the Imperial Guard, it is traditional for it to prove itself in combat before it receives an an individual name for itself from the regiment in which it serves. Due to this convention, all new Baneswords are referred to with either an abbreviation of their serial number or the name of their Forge World of origin until they have proved themselves in combat. Many regiments include the name of fallen foes in the new name for the Banesword. However, after a direct hit from a Quake Cannon, there is often little left to confirm the identity of those who were killed. 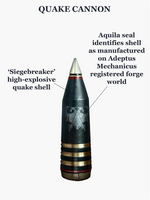 Schematic of a Quake Cannon shell 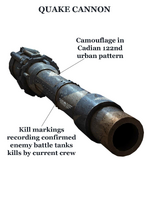 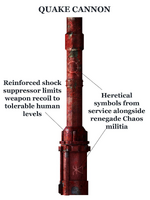