Warhammer 40k Wiki
Register
Don't have an account?
Sign In
Advertisement
in: B, Imperial Tanks, Imperial Guard,
and 5 more
English

The Baneblade is the primary super-heavy tank of the Astra Militarum, and one of the largest and oldest armoured fighting vehicles in the service of the Imperial armed forces. The tank is a venerated Standard Template Construct (STC) design, with ten people needed to fully crew one. It is also one of the oldest STC designs in existence. They are often used as command vehicles by Imperial Guard commanders.

Bristling with armaments, a Baneblade is less of a tank and more of a rolling fortress. An unmistakable icon of the Imperium's armoured supremacy, a single one of these super-heavy war engines can serve as the mailed fist of an Astra Militarum offensive, or as the unassailable lynchpin of even the most desperate of defences.

Possessed of overwhelming and versatile firepower, exceptionally thick armour and a near-indefatigable power plant, the Baneblade has been deployed in many varied war zones throughout the galaxy. Wherever a Baneblade sees battle it quickly becomes the centre of the battle line. Guardsmen and smaller tanks shelter in its colossal shadow, even as the ranks of the enemy flee from it in abject terror.

The standard configuration Baneblade is a powerful main battle tank with no particular strength or weakness. It is best deployed in the role of heavy infantry support, where it can engage both infantry waves with its Heavy Bolters and Demolisher Cannon, while at the same time punish enemy armour with its Mega Battle Cannon and Lascannons.

The sight of a mighty Baneblade rumbling forward is a major boost for any supporting Imperial infantry's morale, and when correctly supported, the Baneblade excels at decimating anything smaller than itself with its large array of guns while crushing the remains of its enemies under its massive tracks.

This combination of inspiring presence on the battlefield and tremendous capacity for destruction explains why the Baneblade is favoured as a command vehicle by regimental commanders and even members of the Imperial General Staff who decide to take to the field.

Such Command Baneblades are specially equipped with powerful Vox arrays and tactical planning equipment, allowing the officer in charge to keep control of his troops while he participates in the fighting.

For all its might, however, the Baneblade is not perfect: it is slow, lacks maneuverability and is a very large target. Baneblades are also not as effective when facing dedicated anti-armour vehicles due to the relative short range of their weapons.

A single tank hunter like a Leman Russ Vanquisher can easily damage or even destroy a Baneblade long before it comes into range of the smaller tank. This is why the very adaptable chassis of the Baneblade has been used over the millennia to create more dedicated versions.

These include the Shadowsword Titan-killer which forgoes almost all other weapons to sport a Volcano Cannon; to the Stormlord line-breaker tank which gives up all anti-armour weaponry in favour of a Vulcan Mega Bolter, a greater number of Heavy Bolters, and the capacity to transport an entire platoon of Imperial Guardsmen.

The Baneblade ranks amongst the most recognisable super-heavy tank of the Great Crusade, produced in the tens of thousands for service with the Excertus Imperialis all across the ever-expanding Imperium.

The majority of Baneblades were produced on Mars, and the Lords of the Red Planet hold the Mars class vehicle as the inalienable iteration of the Machine God's vision and it galled them greatly that certain other Forge Worlds produced their own patterns.

To the untrained eye the differences between the vehicles appeared superficial, but the Tech-priests of Mars preached otherwise, furthering that many schisms that had developed between the various Forge Worlds throughout the final decades of the Great Crusade.

Regardless of its provenance, the Baneblade was a stately iron beast, its iconic turret-mounted Baneblade Cannon the bane of countless foes over the years. Its armour was nigh impenetrable and many of those in the service of the elite Solar Auxilia had been upgraded to the "Solar" sub-pattern and fitted with extensive exploration and survival equipment to allow operation in the most hostile of environments.

The Baneblade and its variants are amongst the oldest patterns of tanks still being used by the Imperium of Man in the 41st Millennium. It is rumoured that in the past there were entire divisions of Baneblades in service to the Emperor of Mankind but that number is severely diminished at present, like most of the more advanced technologies available to the Imperium.

There are two main patterns of Baneblade, the Lucius Pattern from Forge World Lucius, and the preeminent Mars Pattern, still manufactured on Mars itself. The Lucius Pattern Baneblade has a more heavily fortified chassis and larger amounts of armour plate and makes use of a more powerful engine to remain mobile with this added weight.

However, the vast majority of Baneblades available in the Imperium were created in the forges of Mars. Every Baneblade made in the Imperium is transcribed with its own unique serial number and name and all the records of each vehicle's service and accomplishments in combat are reverently recorded on the Forge World of that vehicle's construction.

This totals eleven weapon barrels of various sizes and roles, giving full coverage in all arcs. The Baneblade can be further given a pintle mounted Storm Bolter or Heavy Stubber and a single-fire Hunter-Killer Missile Launcher, bringing the total up to thirteen. The vehicle can also be outfitted with a Searchlight and Smoke Launchers.

The interior of a Baneblade has more in common with a fortified command bunker than it does with the insides of other, smaller armoured vehicles. Its weapons interfaces, operations points and data relays sprawl across several intermeshed layers of decks, which are connected by a warren of corridors and companionways.

Yet despite its enormous bulk there is precious little space for the numerous crew. Every surface is encrusted with sancti-wired Servo-skulls, draped with Purity Seals or pocked with munitions sconces, all of which are devoted to the steering of the Baneblade's raging Machine Spirit.

Before this ancient spirit can be awakened, each control panel and catechetical dial must be daubed with sanctified oils. When the engines do roar to fiery life, these oils quickly vaporise into an acrid fume. Many crews believe this represents the tank sharing its breath with those it has deemed worthy.

The clangour inside a fully active Baneblade rivals that of all but the most apocalyptic of conflicts. Thunderous blasts reverberate throughout the hull every time the primary weapon is fired. A high-pitched clatter fills the stifling air as an unending cascade of spent shell casings rains down through grills into collection receptacles. Even the scratching of quill on parchment is deafening as reams of cogitative data are hastily recorded by batteries of auto-scribes.

This is to say nothing of the mighty engine itself, the living heart of the Baneblade that thrums with fury as the mechanical beast drives into battle. Those crew manning the lower decks may hear the sound of lesser vehicles breaking beneath the Baneblade's adamantium tracks.

The metallic crunch echoes up through the base plates, as does the splintering of bones from any warriors unlucky enough to be caught in the beast's path. So constant is this deafening sound that many Baneblade crew members begin to lose their sanity when exposed to the relative silence outside of their mechanical cocoon for too long.

The hull of a Baneblade is composed of the most durable steel alloys known to the Tech-priests of the Adeptus Mechanicus. Even so, it is not completely impervious to damage. Baneblades are sent into battle against the most terrifying abominations in the galaxy -- gargantuan machines of eldritch design, towering xenos creatures and heinous daemons spewed forth from the Warp.

These profane war machines and apex monstrosities can deliver enough force to breach a Baneblade's hull. When they do, destructive shock waves are sent rippling throughout the interior chambers. The pressure surge is enough to pulverise those inside, caving in the skulls of those closest to the impact and liquefying their organs.

But the Baneblade is not dead. Hatches clamp down to contain burning plasma or daemonic bile, and the tank's neuro-couplings are quickly rerouted to the surviving crew members. Though scarred and scorched, the Baneblade can take an inordinate amount of damage without losing any of its destructive potential.

A Baneblade is a massive war machine, requiring a crew of ten individuals to function properly. The functions of a Baneblade crew include:

Baneblade operating near a Chimera. 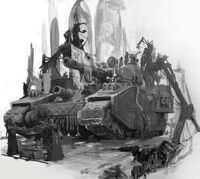 A Baneblade being maintained by the Tech-priests of the Adeptus Mechanicus.

A Baneblade of the 8th Armageddon Steel Legion Heavy Tank Company; this Baneblade is equipped with a non-standard hydraulic dozer blade for mine clearing added as a field-modification.

A Baneblade in an entrenched position. 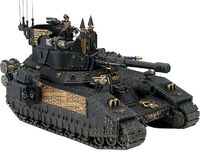 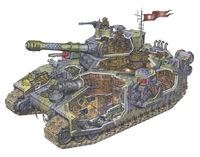