The Bad Moons are a powerful and very wealthy Ork "klan." The Bad Moons are the richest of all the Ork klanz. This is because their teeth grow faster than anyone else's, meaning that even the lowliest Bad Moon Ork has a steady supply of the standard form of Ork wealth.

This is not regarded as an unfair advantage, as any Ork who is big and ferocious enough can simply smash the teeth out of a Bad Moons' head.

In fact, many Ork Warbosses like to keep a mob of Bad Moons around for just this purpose, their toothy gobs a ready supply of extra teef. It is often not a terrible deal for the Bad Moons either, as any Ork tough enough to beat their teeth out of them is usually one worth following into a fight. The Bad Moons essentially fulfill the role of a merchant caste in what passes for Ork society, and have a reputation for showing off.

They are always continuously buying, selling, swapping, and conning to get teeth. The highest-ranking amongst them wear garishly decorated war banners on their backs and the richest openly flaunt their wealth by wearing necklaces of Ork teeth. These Orks prefer a posh and refined lifestyle, at least by Ork standards.

Instead of rushing in to melee combat immediately like many of their brethren, they sometimes hang well back, firing their deadly Snazzguns into the fray while their mobs of Gretchin slaves wade into the enemy ranks to do the dirty work, with tooth and claw and Choppa.

The wealthiest and most ostentatious of the Ork klanz, the Bad Moons are idle, venal Orks with a reputation for showing off and using their wealth and status like a club to bludgeon other, less fortunate Orks into line.

The Orkish economy, such as it is, is based on "teef," which are literally Ork teeth, harvested from living and dead Orks. An Ork's teeth constantly grow, and those that are lost are quickly replaced, which means a nearly endless, if slowly produced, supply of currency.

In such an economy, the Orks whose teeth grow the quickest are the wealthiest, and the teeth of the Bad Moons grow the fastest of all.

Bad Moons are loud-mouthed, tight-fisted braggarts who spend their teef on only the finest things, from Shootas and Choppas to fancy clothes. In camp as well as in battle, they swagger about in the best armour that teef can buy, festooned in shiny bits of precious metals, gems, and other precious items of value.

Some Runtherdz reckon that it must have been the Bad Moons that came up with the whole concept of Ork teef being used to buy things, when the klan figured out how quick their teeth grow. Of course there are other Runtherdz who say it is the other way round, and when teef became Ork currency the Bad Moons made their teeth grow quicker so they would have the most. In either case, Orks seldom dwell on such things for long, as knocking out teeth is far more interesting than talking about them.

Bad Moons make excellent merchants and money lenders. They know the value of any item at a glance, and with a quick study of an individual, they can discern exactly how much that individual is willing to pay for something. Always eager to acquire new luxuries, haggling Bad Moons are a fixture in any Ork gathering where goods and services are being exchanged.

All this wealth means that Bad Moons have an ostentatious reputation, and their vehicles are festooned with gaudy decoration and gold plating, as is the majority of their wargear. As gold is considered practically worthless by most Orks, being too soft to make good weapons or vehicles, they are more than happy to trade it away to Bad Moons for the more valuable teef.

Bad Moons love gold more than any other metal, and will commonly have a couple of glinting teeth in their avaricious grins. If there is a downside to their wealth, it is the fact that while they have access to more teef and better loot than the average Ork, it is also incredibly easy to separate them from said wealth.

All it takes is a bigger, tougher Ork to come along and smash a Bad Moons' teeth out of his head to make a serious dent in their cash flow. This is seen as right, proper, and fair by all Orks, even Bad Moons, as the violent "might makes right, biggest is best" part of Orkish society balances out the otherwise constantly expanding wealth available to Bad Moons.

Bad Moons mobs are always well-equipped, at least by Ork standards. Their Nobz often sport flashy back banners and massive, kustomised weapons, and are followed by entourages of scurrying Grot servants loaded down with ammunition and chests of teef.

Some of this ornamentation is simply to show other Orks just what a big deal the Bad Moons are. This could include huge, coloured totems above their wagons bearing grinning Ork faces, or teetering statues of Gork or Mork built from precious metals and stones all mashed together (they're more valuable that way).

Warbosses and Nobz of the Bad Moons klan are well-known as aficionados of kustom Battlewagons, which are huge, heavily-armed, flashy vehicles designed to carry an entire mob along with all of its Gretchin, Snotlings, Squigs, and any other gubbins they can squeeze in.

The wealthiest, most well-heeled Bad Moons become Flash Gits. Though they are not unique to this klan, many Bad Moons aspire to such Orky opulence, and these Orks possess more teef than sense and are absolutely addicted to loud, flashy, highly-customised weapons.

Strutting around with expensive Snazzguns and Kustom Shootas, Flash Gits tend to have a "style over substance" mindset that appeals to the greedy Bad Moons. While all Flash Gits are known to be arrogant, conniving, treacherous scum with a decidedly mercenary and "un-Orky" mindset, those from the Bad Moons klan are considered the worst of all.

A mob of Bad Moon Nobz on foot will bristle with personalised Kombi-weapons and gold-plated Deffgunz, sauntering into battle with firepower enough to slaughter whole platoons of the enemy. These heavily-armed braggards think it is a blast to wipe out an enemy unit just as a rival Ork klan is about to engage them in melee.

Another aspect of the wealthy Bad Moon klan are their pretensions to knowledge (such as it is understood among the Orks). Basically, the Bad Moons have a reputation for knowing things most Orks see no practical use for.

This klan also tends to have a lot of Weirdboyz, who use their wealth to dress flamboyantly. Unfortunately for them, they often end up being dragged off to battle and used against the enemy like any other weapon.

All Bad Moons Orks have a well-deserved reputation for being as proud of their loot as of their prowess in battle. The Split-Grin tribe are among the worst of their kind, and have amassed piles of teef in recent years.

Following the trail of destruction sown by Grukk and the Red WAAAGH!, Gashrakk da Flash and his Split-Grins rivalled Grukk's own tribe in size and status. For Terran years the Split-Grin Bad Moons scraped out an existence on Eyrok skirmishing with their rivals, the Goffs of the Skullcracker tribe. Their Warboss, Skagfing, was content to lead his Boyz in the brawl with the Goffs and make some teef in the process, trading with Freebooterz for shiny stuff.

The big guns of the klan kept the Skullcrackers in check, and Skagfing liked to make jokes about poor old Krugg the "Tyrant" who couldn't afford a good Shoota. The Split-Grin tribe might not have been huge, but they had the best loot, and the biggest guns to keep other Orks from getting their hands on it.

This all changed when Grukk met Mogrok and decided to take control of all Eyrok's Orks. Skagfing had only recently heard about his rival's death when Grukk and his lads smashed their way into the Bad Moons camp, the Goff Warlord sacrificing loads of Boyz as he charged to in pin Skagfing down, stand on his chest, and messily rip his face from his skull.

In a single bloody blow, the Split-Grins were absorbed into the Skullcrackers and Grukk took control of the tribe. In Skagfing's place a bunch of Nobz tried to bully their way to the top, but none of them could match the raw aggression and prodigious size of Grukk.

Fragmented and leaderless, the Split-Grin tribe became inferior to the Skullcrackers. Grukk used the tribe for its massive guns and kustom weapons, draining their stockpiles to build up his warband. The Split-Grin tribe also gave Grukk access to the Sanctus Reach Sub-sector's Freebooterz, giving the Ork Warboss a way off Eyrok and out into the void.

Of course, Freebooterz' tastes are just as extravagant as Bad Moons, and so as soon as Grukk's warband took to the stars, the fortunes of the Split-Grins changed again. Drawn to Grukk Face-rippa's Red WAAAGH! by riches untold, Gashrakk took over as Warboss of the Split-Grin tribe.

Bad Moons are more likely to engage their foes at range than most other Orks, punctuating their raucous cackling with the fire of their long-ranged weapons.

Bad Moons prefer to kill with their extravagant and deafening guns. Therefore, Bad Moons often have many Flash Gitz, who set up across the battlefield before the fighting starts in earnest and lay waste to anyone who comes into their fire lanes.

Bad Moons are usually capable melee combatants, but prefer to fight at range. As such, if they find themselves too close to use their guns effectively, Bad Moons sometimes reposition themselves to other convenient positions where they can continue firing their guns unimpeded.

The Bad Moons are notoriously avaricious and greedy and care about nothing except the acquisition of wealth.

They will even go so far to attain wealth by engaging in highly secret deals with other alien races to gain access to technology and wargear unavailable to other Orks.

They also love to spend their teeth on food, which means many Bad Moons are a bit stout around the belt.

The Bad Moons favour flashy and gaudy colours in their liveries, usually golden yellow and black for their wargear, taking a snarling moon on a field of black flames as their klan emblem.

Their armour and wargear is painted with gaudy patterns in the klan colours, with a heavy emphasis on yellow, gold, and red, and they have more jewellery and piercings than the greenskins of any other Ork klan.

If something looks valuable, a Bad Moon will find a way to wear it, stick it through his body or bolt it onto the side of his vehicle, preferably somewhere that every other Ork can clearly see it.

However, it is only a fool who underestimates the raw strength of the Ork underneath the ostentation. A Bad Moons Warboss is just as happy to use a shiny boss-pole to smash skulls in as he is to use it to boast of his wealth.

The Bad Moons klan sigil is a snarling yellow crescent moon over a black sunburst on a yellow banner. Their banners are often chased with black and white check, embroidered with threads of gold, and encrusted with glittery, shiny bitz. 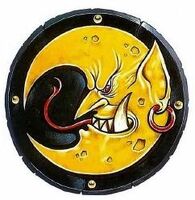 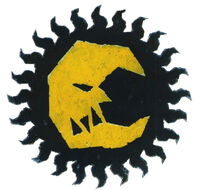 A group of Bad Moons Orks

As the wealthiest of the klanz, the Bad Moons spend their teef on the 'ardest armour money can buy, such as the Mega-Armour sported by this pair of Meganobz 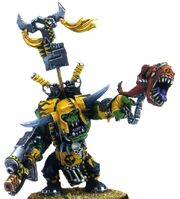 A Bad Moons Warboss showing off his wealth with a customised Shoota, gaudily painted armour and pet Attack Squig 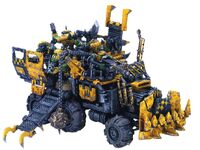