The Standard Template Construct (STC) designs for the Baal Pattern Predator were discovered by the Blood Angels Space Marine Legion at the start of the Great Crusade in the late 30th Millennium. The designs were found on the planet of Atium III amidst the ruins of the Arch-Heretek Lord de Ladt's fortress. After the Astartes of the IX Legion stormed into the fortress and defeated the Heretek's forces, they found the Baal Predator's STC designs within his inner sanctum. The Blood Angels never handed the designs over to the Adeptus Mechanicus as Imperial law required and instead returned with them to their homeworld of Baal, where the originals remain to this day. The designs are stored alongside the Chapter's Relics, and are protected from enemies and Imperial allies alike. This act has caused great friction between the Blood Angels and the Adeptus Mechanicus, which claims that this variant and its STC template were never officially sanctified in the eyes of the Machine God. The Blood Angels only allow the knowledge of the Baal Predator's design to be used by their Successor Chapters, who also protect this knowledge from falling into the hands of others.

The Baal Predator is the variant Predator pattern that differs the most from the standard pattern. The Baal Predator can be equipped with either twin-linked Assault Cannons or a Flamestorm Cannon, which is a massive, vehicle-sized Flamer weapon. Unlike other Predator variants, the Baal Predator is able to equip Heavy Flamers and Multi-Meltas on the vehicle's sponson-mounts. The Baal Pattern is also faster and more maneuverable than any other Rhino chassis-based vehicle in use by the Adeptus Astartes. The Blood Angels have also reverse-engineered these features into their other vehicles. Due to the designs for the Baal Predator being kept secret, there may be other differences between this pattern and standard pattern Predators. The Baal Predator, like all other Predator patterns, can also be outfitted with a Dozer Blade, Extra Armour Plating, a Hunter-Killer Missile Launcher, improved communications equipment, a Pintle-mounted Storm Bolter, a Searchlight, and Smoke Launchers.

A Baal Predator of the Angels Sanguine Space Marine Chapter

A Baal Predator of the Blood Angels Space Marine Chapter

A Baal Predator of the Flesh Tearers Space Marine Chapter 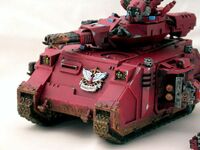 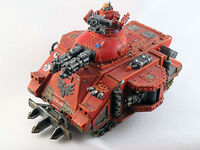 A Baal Predator based on the Predator Mark IIIc chassis
Add a photo to this gallery
Retrieved from "https://warhammer40k.fandom.com/wiki/Baal_Predator?oldid=312021"
Community content is available under CC-BY-SA unless otherwise noted.