Warhammer 40k Wiki
Register
Don't have an account?
Sign In
Advertisement
in: A, Imperium, Space Marine Chapters,
and 2 more
English

The Avenging Sons is a Codex Astartes-compliant Loyalist Space Marines Chapter originally created during the 19th Founding from the gene-seed of the Ultramarines.

The Avenging Sons hail from the world of Traekonnis Major.

The Avenging Sons were raised during the 19th Founding in the mid-36th Millennium.

They are a Successor Chapter of the Ultramarines and proudly maintain that Chapter's vaunted martial traditions and their stoic faith in the tenets of the Codex Astartes written by their Primarch, Roboute Guilliman.

The Avenging Sons have an average-sized Chapter Fleet, of which the only known vessels are:

The Avenging Sons wear azure power armour. The Aquila or Imperialis on the chest guard is gold.

The Avenging Sons' Chapter badge is a white crosslet, centred on a field of azure.

In the novel Dark Imperium by Guy Haley, a Chapter of Primaris Space Marines is raised at the Pit of Raukos as the last action of the Ultima Founding, and it is called the Avenging Sons. Roboute Guilliman based this new Chapter at the world of Callimachus within the growing Realm of Ultramar.

It is not known whether the name of this Primaris Marine Chapter is a mistake or if it has some connection to the original Avenging Sons. 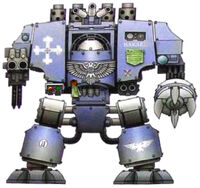 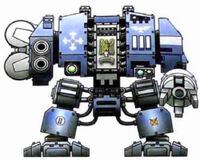 An Avenging Sons Land Raider Prometheus, which serves as a transport for their elite 1st Company Terminators.

Infernal Relic Predator of the Renegade Avenging Sons 3rd Company; this vehicle was once a venerated relic of the Avenging Sons Chapter until it fell from the Emperor's grace, along with the entire 3rd Company, at Helmabad in 970.M41.
Español
Community content is available under CC-BY-SA unless otherwise noted.
Advertisement