Warhammer 40k Wiki
Register
Don't have an account?
Sign In
Advertisement
in: A, Imperial Aircraft, Imperial Navy,
and 6 more
English

The Avenger is a strike aircraft of the Imperial Navy's Aeronautica Imperialis that is dedicated to ground attack missions on behalf of the regiments of the Astra Militarum.

The Avenger is a dedicated strike fighter, intended to conduct high-speed, low-level attacks on ground targets, with armoured vehicle formations and high-value strategic assets such as munitions dumps forming its principal prey.

Its effectiveness is such that it is now a staple of any Imperial Navy air support mission. The Avenger's use is often specifically requested by the Adepta Sororitas should they require close support during their purgations and the aircraft is also used by the armed forces of the Adeptus Mechanicus, who made use of the aircraft in its own conflicts before the Imperium was even founded.

Imperial records show that the Avenger either fell out of use by the Imperium after the Horus Heresy and Great Scouring or its Standard Template Construct (STC) designs were lost until its reemergence in the 36th Millennium.

The Avenger was adopted by forces loyal to the Imperial Saint and reforming Ecclesiarch Sebastian Thor during the bloody wars of faith and schism of the 36th Millennium now called the Age of Apostasy by Imperial savants.

In the 41st Millennium the Avenger is widely used by the Aeronautica Imperialis to support Astra Militarum units on the ground.

The Avenger Strike Fighter is heavily armed, and is most commonly used to destroy enemy armoured vehicles and fortified structures. The basic loadout of the Avenger is a hull-mounted Avenger Bolt Cannon, a set of twin-linked wing-mounted Lascannons, one on each wing, and a rear-facing Heavy Stubber for defensive actions in case enemy aircraft are on its tail.

The Avenger can also be outfitted with the following enhancements: a chaff launcher, an armoured cockpit, infra-red targeting equipment, and illumination flares.

During the Great Crusade and Horus Heresy eras in the late 30th and early 31st Millennia, the Avenger was capable of having its entire Human crew replaced with hard-wired servitor control and dedicated cogitator arrays designed to identify and target weak spots on enemy vehicles.

This automated control transformed the Avenger into an extremely deadly tank hunter. It is unknown if this capability is still possible in the Avengers deployed by the Imperial Navy in the 41st Millennium.

The technical specifications of the Avenger have not yet been made publicly available by the Adeptus Mechanicus. 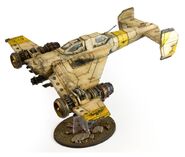 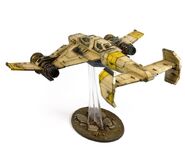 An Avenger Strike Fighter deployed during the Orphean War, Right Side View
Español
Community content is available under CC-BY-SA unless otherwise noted.
Advertisement