An Avatar is the spirit of an Eldar God in a material form, usually the Eldar God of War Kaela Mensha Khaine, though the term can actually apply to any divine entity of the Warp that has found some way to take on a corporeal form.

Primarch Lorgar stands triumphant over an Avatar of Khaine 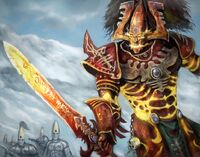