An Autogun is a fully automatic Auto Weapon that fires solid-slug ballistic rounds at the intended target in rapid succession. Cheap, rugged and reliable, it can be found throughout the Imperium of Man, where it is appreciated for its decent damage and accuracy.

Its main drawbacks are its weight and the need to carry a large amount of cumbersome ammunition for prolonged operations. The latter drawback has led to the Astra Militarum being equipped with Lasguns as its standard armament since the early 32nd Millennium.

Xenos races such as the brutal Orks are known to take particular relish in using several of their own crude versions of these formidable automatic weapons, known as Sluggas, Shootas and Snazzguns.

The origin of Autoguns lay in Mankind's past, to its precursors the automatic rifle and assault rifle, which date back at least to the late 2nd Millennium. Autoguns came into their own during the early 3rd Millennium. These ancient automatic weapons used large calibre, low-velocity bullets which were made from brass.

At the time of the Great Crusade and the Horus Heresy at the end of the 30th Millennium, most members of the Imperial Army were issued with Autoguns, as the weapon proved easy enough to use and maintain for the average trooper, while at the same time being cheap and efficient enough to be furnished to the masses of human warriors.

The only disadvantage of the Autogun were the nightmarish logistics problems faced in ensuring a stable supply of ammunition, and so the Autogun was eventually phased out as the standard weapon of the Astra Militarum in favour of the Lasgun by the Departmento Munitorum in the early 32nd Millennium, as both weapons were roughly equal in efficiency and ease-of-use, but the standard Power Packs that powered the Lasgun could be easily recharged in the field, while crafting more ammunition for the Autoguns proved arduous.

In the late 41st Millennium, Autoguns are not as common as the Lasgun amongst the Imperial Guard regiments, but they are still issued in substantial numbers, especially by second or third line Planetary Defence Forces or militias.

There are many different patterns and models of Autogun produced across the Imperium. The simple technology needed to manufacture Autoguns make them common on Frontier Worlds and also with gang members on Hive Worlds. These are the most commonly employed weapons in the Underhive of a Hive City.

The Autogun is a ballistic projectile weapon similar in appearance and operation to the assault rifles of ancient Terra, but the Imperium's technological advances allow these weapons to use caseless ammunition with projectiles made of metal, plastic or ceramics.

The weapons are themselves constructed with plasteel, increasing their rate of fire and reliability. There are many different patterns and models of Autogun produced across the width and breadth of the Imperium.

The typical Autogun may not be incredibly accurate or as reliable as a Lasgun, but will make up for it with a higher rate of fire and cheap and readily available ammunition, standardised in preloaded magazines.

As a weapon, the Autogun is comparable in effectiveness to a Lasgun but lacks some of the Lasgun's versatility, damage output and reliability. Autoguns are prone to jamming, especially in dusty and muddy conditions where intricate moving parts can quickly become fouled.

A good maintenance routine is necessary for troops armed with Autoguns. In general, Autoguns and their ammunition are also heavier than Lasguns and their power cells.

However, an Autogun does surpass a Lasgun with its higher rate of fire. Additionally, those hurt but not killed outright by an Autogun are more likely to bleed out from injury and succumb to follow-up infections, while a las-shot immediately cauterizes any wound it creates.

There are innumerable models and variants of the Autogun in use around the Imperium widely differing in technical specifications (most Autoguns are entirely non-STC constructs, so they are made according to locally developed schematics and to accommodate for locally available cartridges).

One of the best examples of such weapons is an Agripinaa Pattern Mark 2 Autogun that saw action during the Siege of Vraks as a staple arm for the Heretic forces infantrymen. Here are its specs:

An archaic Autogun of an unknown pattern

Another archaic Autogun of an unknown pattern

An ancient schematic of an archaic Autogun of unknown pattern 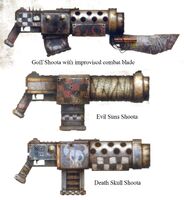 An ancient variant of Ork Shoota

A Mekboyz Shoota schematic
Add a photo to this gallery
Retrieved from "https://warhammer40k.fandom.com/wiki/Autogun?oldid=353224"
Community content is available under CC-BY-SA unless otherwise noted.