An Autocannon is an automatic, self-loading heavy ballistic weapon that fires a high velocity hail of solid shells, and is used by the military forces of the Imperium of Man. It is an ancient weapon, but has nevertheless remained a widely-used piece of wargear throughout the Imperium's history. These rapid-firing weapons can lay down a burst of fire to cover advancing troops, or strafe enemy-held positions. Autocannons are considered ideally suited for attacking enemy vehicles and fortifications from long range. Though they lack the heavy punch of a Lascannon, they can fire more rapidly and are less prone to overheating. However, the need to carry large amounts of ammunition is a distinct disadvantage. This weapon is also very large and ungainly. This bulk, combined with the serious recoil it creates, often restricts an Autocannon to a vehicle mounting or to use by dedicated Heavy Weapons Teams.

Autocannon shells once contained an explosive charge similar to that of a bolt round (only very larger) though the means of producing this charge has been lost to Imperial science and now the rounds fired by an Autocannon are less powerful than they once were. However, the Autocannon is still more than capable of eliminating heavily armoured infantry or light vehicles, and is employed by Imperial Guard fire support weapons teams due to their versatility and reliability. Though Autocannons are designed to be fired from a standard pattern bipod with a steel glacis stand, in extreme situations it is not unknown for some of the physically stronger troops to carry them into battle slung from a suspensor harness, though this "gung-ho" method of firing is unusual and not encouraged.

Surprisingly, the Autocannon is almost ignored as a weapon by the warriors of the Adeptus Astartes. While their superhuman physique and Power Armour-augmented strength allows a Space Marine to carry and fire an Autocannon with ease, the large majority of Loyalist Chapters favor either ranged weapons with a much higher rate of fire (like the Heavy Bolter or Assault Cannon), or ranged weapons packing more killing power with each individual shot (like the Lascannon or Multi-melta). As such, the Autocannon is a rarely fielded weapon for the Space Marines. However, the Chaos Space Marines who have thrown in their allegiance with the Ruinous Powers do make ample usage of the Autocannon, as it is a simple and sturdy weapon requiring very little of the heavy maintenance that most Chaos Space Marine warbands now lack the resources to execute.

Although the Autocannon is quite common, its popularity is rather inconsistent. Many Imperial commanders shun use of the Autocannon, maintaining that it serves no role fully. It lacks the firing rate of a Heavy Bolter or Multi-Laser, meaning that its anti-infantry power is limited. It also lacks the sheer armour-piercing hitting power of a Krak Missile or Lascannon, and thus cannot be deployed to destroy enemy armour. It is, as a result, chided by many commanders.

However, although many disapprove of the Autocannon, there are just as many who hail it as a tactically vital weapon. Its supporters argue that its versatility is its best attribute; that it can in fact be useful against both infantry and armour. Although it cannot tear through ranks of infantry like an Assault Cannon can, or bring down enemy armour to the extent of a Lascannon, it can still support an army in any eventuality. However, it is against the Tyranids that the Autocannon finds its true calling. The ability to deliver larger volumes of heavy firepower is vital in combating the larger Tyranids such as Hive Tyrants and Carnifex, which lack the natural armour to require the penetrating power of a Lascannon, but are too tough to be threatened by a Heavy Bolter.

The Autocannon is a relatively simple weapon; it is mass produced in the Manufactoria of Imperial planets. It is a large weapon, and is far too cumbersome to be carried with its ammunition by one man. As a consequence, the weapon is usually mounted only vehicles. However, in the Imperial Guard, Autocannons are often operated by teams of two soldiers. This is a manageable arrangement; one man mans the gun itself while the other loads the ammunition. Man-portable Autocannon heavy weapons are usually fitted with a small blast shield to provide some protection to the crew from incoming fire.

The Imperial Guard generally makes heavy use of the Autocannon. This usage does of course vary, depending on a given regiment's tactical preferences. It is frequently used with:

The Imperial Navy frequently equips its light fighter aircraft with Autocannons. The light-armor-piercing and semi-rapid fire characteristics of the weapon perfectly suit the Navy's snub fighters in dogfighting situations. The Lightning fighter craft in particular employs this weapon to great effect. The Navy commonly mounts the Autocannon on:

The Autocannon is not used as widely in the Adeptus Astartes as it is in other branches of the Imperial armies. Being an elite and fast-moving army, the Autocannon has fallen out of favour with them, and weapons such as the Lascannon or Heavy Bolter are preferred. However, due to the Autocannon's versatility, most Chapters still retain a few examples in their armoury. Many Terminators carry them, as these ultra-heavy troops can move and fire an Autocannon one-handed and still carry out direct assault. The weapon, as noted above, is far more popular with Chaos Space Marines, particularly those drawn from Renegade Chapters. Autocannons are frequently used with:

An Imperial Autocannon of an unknown pattern

A Departmento Munitorum schematic of a Gryphonne IV Pattern Autocannon 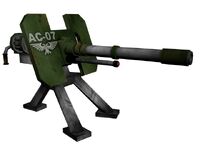 A crew-served, static emplaced Autocannon with tripod mount utilised by the Imperial Guard 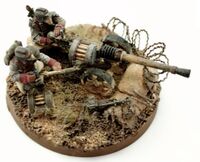 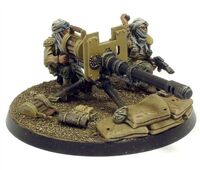 A crew-served, wheel-mounted Autocannon utilised by regiments of the Imperial Guard

A Reaper Autocannon of an unknown pattern

An Alpha Legion Chaos Havoc armed with a Reaper Autocannon

A Chaos Space Marine Havoc armed with a Autocannon 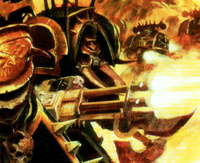 A Chaos Terminator armed with a Reaper Autocannon
Add a photo to this gallery
Retrieved from "https://warhammer40k.fandom.com/wiki/Autocannon?oldid=207810"
Community content is available under CC-BY-SA unless otherwise noted.