Warhammer 40k Wiki
Register
Don't have an account?
Sign In
Advertisement
in: A, Aeldari, Asuryani,
and 2 more
English

An Autarch is one of those few Craftworld Aeldari who have mastered many of the Asuryani Paths over the centuries, including one or more facets of the Path of the Warrior. They possess a consummate understanding of the art of war and serve as the supreme commanders, strategists and generals of an Asuryani craftworld's warhost.

This Asuryani Path, known as the Path of Command or Path of the Leader, is pursued by highly skilled individuals who believe martial excellence can be achieved by gaining a wider perspective of battle that allows the Eldar warhost to achieve victory in the most efficient and lethal way possible.

Autarchs do not limit themselves to the single-minded specifications required of a single Path like most Asuryani. The Autarch possesses an unparalleled strategic ability which far outshines an Exarch's obsession with only a singular facet of war. This enables an Autarch to lead a craftworld warhost that operates in perfect unison, with each component of the Asuryani war machine functioning in perfect synchronicity.

It is not only at the aspect of command that an Autarch excels, for they are consummate warriors as well, and often spearhead assaults, fighting an enemy army's leader in personal combat or contemptuously destroying war machines with ease. Autarchs are considered integral parts of Asuryani culture due to their versatility and ability to lead the Asuryani on the myriad paths of life and death.

Compared to Humans, the Aeldari are incredibly long-lived. In the ancient past, this xenos race learned the dangers of unfettered indulgence, much to their loss, and so their society is now rigidly structured around the concept of the Paths of Life. Over the course of their long lives, Craftworld Aeldari choose many different Paths, not moving on to another until they have mastered their current choice. The Paths most familiar to Imperial scholars are the Path of the Warrior and the Path of the Seer.

Following the Path of the Warrior, an Asuryani chooses one Warrior Aspect of their war god, Kaela Mensha Khaine, and pursues it to total mastery. Most of these warriors then put aside their armour and weapons and pursue a new Path, completely unrelated to warfare and violence. Rarely, an Aspect Warrior becomes lost on the Path, forever trapped within the pursuit of martial superiority; these warriors become the dreaded Exarchs, the leaders and high priests of the Aspect Shrines.

When an Asuryani leaves an Aspect Shrine, he abandons its teachings and disciplines, forsakes its weapons and wargear, and absolutely disassociates himself from it in the pursuit of a completely new Path. Not so the Autarch, whose duty it is to learn about each Warrior Aspect in turn so that he might better guide them in defence of the craftworld. To this end, the Autarch will join each of his craftworld's most prevalent shrines for a time, learning all that he can of the rituals, skills and battle doctrines of that Aspect.

Once he has taken the teachings of that shrine into himself, he will leave, though he will first participate in a ceremony with the shrine's Exarch known as the Rhaan Lona, or the "Convenant of Wargift." In this secretive rite, a selection of weapons, armour and wargear of the shrine are laid out before the Autarch, from which he chooses a single item to take with him on his ritual journey. The Autarch retains this wargear throughout his life, using it -- and the knowledge that it represents -- for the betterment of his craftworld.

Those selected to walk the Path of the Leader must be the most capable of their kind, for they carry the weight of their race's survival on their shoulders. They must be willing to devote themselves to a long and arduous task above all else. After a time, every Autarch comes to learn that the road to true martial excellence lies not in the heat of melee, but rather in gaining a wider vision of the battle and directing the Asuryani warhost along the most efficient path to victory.

For an Aspect Warrior, success is to embody a specific element of Khaine's warlike nature, becoming one with their ritual weapons so that they might slay the foe with preternatural grace and ease. For an Autarch, success is to harness every aspect of Khaine's might at once -- to achieve victory without weakening the craftworld, and prove the supremacy of the Aeldari race in the process.

An Autarch's insight into each element of the Asuryani warhost gives him an unparalleled strategic ability that an Exarch, obsessed with one facet of Khaine's bloody craft, could never hope to achieve. When a Craftworld Aeldari army is led by an Autarch and guided by his Farseer advisors, it functions as a well-honed machine, each component acting in perfect concert with the others to form an irresistible force.

However, it is not purely as a commander and general that the Autarch excels. When the war-lust is on him, he will call upon the skills he honed amongst the Aspect Shrines to spearhead assaults, duel with the leaders of the foe and destroy their war machines with contemptuous ease. Many Autarchs lead their warhost from the front, plunging into the fray to change the course of the conflict with each well-placed kill.

The more complex an Aeldari Lexicon rune, the more meaning it can carry, as with the rune of the Autarch, which denotes both the aggression of the warrior and the insight of the leader in perfect union. 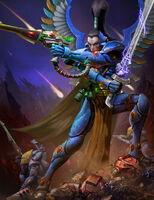 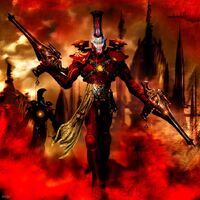 An Asuryani Autarch in combat.

Autarch Uranash Skyblade leads his warhost against the Daemonettes of Slaanesh.
Español
Community content is available under CC-BY-SA unless otherwise noted.
Advertisement