Warhammer 40k Wiki
Register
Don't have an account?
Sign In
Advertisement
in: A, Imperium, Space Marine Chapters,
and 3 more
English

Forest Green
The Aurora Chapter is a Loyalist Chapter of Space Marines that is a Second Founding Successor Chapter of the Ultramarines. Master of the lightning-fast armoured assault, the Chapter Armoury boasts more Land Raiders and Predators than many other Space Marine Chapters.

Many of these vehicles are ancient war relics that have fought for the Aurora Chapter since the Second Founding. Its vehicles are manufactured on its homeworld of Firestorm, a planet covered with industrial macrofactorums to rival most Forge Worlds in scale. Their output ensures that the Aurora Chapter's vehicles never need fear ammunition shortages.

The Aurora Chapter's name has become a byword for armoured assault across the Ultima Segmentum, which serves as its primary area of operations.

The origins of the Aurora Chapter can be traced back to the Great Crusade over ten millennia earlier, when it was still a part of the Ultramarines Legion, then known as the XIIIth Legion, before their reunification with their Primarch Roboute Guilliman.

Following their unification with their primarch, Guilliman quickly set about restructuring his Legion's operational doctrine and hierarchy to suit his personal tastes and style of leadership.

While the newly espoused doctrine of structured adaptability became deeply ingrained within many of the Legion's chapters, there were some notable deviations from this pattern. Some few individual chapters, through long held preference or some quirk of supply, maintained notable strengths of non-standard equipment or personnel.

One of the more noteworthy examples of this was the 4th Chapter, known within the Legion as the "Aurorans," who operated roughly five times as many armoured vehicles as a standard Legion chapter.

Before their unification with their primarch, the warrior brotherhood of the XIIIth had, at that time, only in the solar decades after their initial raising on Terra, begun to display its achievements visually.

But rather than take on a particular livery and iconography as a whole, individual companies who had come to prominence in a particularly important Imperial Compliance operation or campaign took on additions to their core Legion livery -- which maintained the post-Unification storm grey and gunmetal they had worn since the retaking of Sedna at the edge of the Sol System at the start of the Great Crusade -- to commemorate their greatest achievements.

The principally armoured formations of the XIII Legion helped halt an Ork advance on the ash plains of Cypra Mundi, and in doing so had saved a city of millions from a savage death. Afterwards they commemorated the battle by mirroring on their right pauldron the emerald light of the blazing aurora borealis that had riven the skies under which they had fought. Such honours were claimed as the Legion's strength made visible.

Following the end of the Horus Heresy, Roboute Guilliman was responsible for the restructuring of the Imperium's military forces. The vast Space Marine Legions would be broken down into numerous, smaller existing formations, known as a Chapter.

When the Second Founding of the Space Marines was decreed seven Terran years after the death of Horus and the end of his Heresy, most of the old Loyalist Legions divided into fewer than 5 Successor Chapters, but the Ultramarines were divided many times. The existing armoured formations of the Ultramarines 4th Chapter became a part of the newly founded "Aurora" Chapter.

Since that bygone era, the Aurora Chapter has always been known as the undisputed masters of armoured assault. They boast more Land Raiders and Predators than many other Space Marine Chapters. Ever since their creation, in the Second Founding, they have preferred massed spearheads led by heavily armoured main battle tanks, earning them renown throughout the Ultima Segmentum.

Heeding the summons of Ultramarines Chapter Master Marneus Calgar, the Aurora Chapter recently deployed on the Zeist Campaign in support of the Ultramarines against the emergent Tau Empire.

Sometime in 330.M41, there arose a destabilisation of relations between both the Aurora Chapter and their fellow scions of Guilliman -- the Emperor's Spears Chapter. Many Successor Chapters hold little affinity with their genetic forebears, but the Emperor's Spears are a key example in the rare cases of a Chapter detesting one of its kindred bloodlines to the point of coming to blows. In this instance, it was over a matter of honour.

Rather than greet the Emperor's Spears as brethren, the commander of the Aurora Chapter berated the Spears for requiring other warriors to fight their wars inside Elara's Veil. With typical hot blood, the Emperor's Spears replied with a planetary deployment right into the heart of the enemy capital, sustaining heavier losses than the Aurora Chapter's meticulously fought counter-offensive, but stealing all glory of the victory for themselves through three solar days and nights of brutal urban warfare.

With the Chaos warlord's still-bloody skull chained to his pauldron, the lord of the 4th Warhost -- Captain Trystance of the Arakanii -- voxed the Aurora Chapter commander and informed him that his warriors had no right to mark the battle on their war banners as a victory, since the Emperor's Spears had "done all the hard work."

The exact events that led to continued destabilisations in the Chapters' relations are unclear, though it seems both commanders eventually agreed to an honour duel to end the unrest. Even this engagement is the source of yet more conflict, as both Chapters claim their champion was victorious, and in the skirmish that followed, both Chapters claim the other side fired the first shot that led to several warships sustaining significant damage in the name of Adeptus Astartes pride.

A group of representatives from the Ultramarines, acting either as benevolent overseers or unwanted judges depending on which Chapter's perspective is being described at the time, later ruled in the Aurora Chapter's favour. They stated that the Emperor's Spears had acted according to rash, impulsive instincts rather than following the approved guidelines for multi-Chapter warfare laid out in the Codex Astartes and that the glory of the victory was to be equally shared.

Such was the bitterness that arose over the Ultramarines' perceived inflexibility (some archives list it as "favouritism"...) that Trystance of the 4th Warhost swore never to set foot on Macragge even if the planet was imperiled by threat of destruction.

No record exists of the Emperor's Spears and the Aurora Chapter fighting together since the event, though there is an apocryphal tale in the Liber Honora Astartes Quintia that says a cargo vessel arrives every ten standard years in the skies above Firestorm, homeworld of the Aurora Chapter, "declaring that it brings a tribute to the Spears' 'beloved cousins.'"

This gift is the same each decade: the ship has a hold full of seawater and several hundred abyssal vine-serpents, supposedly a despised -- and incredibly ugly -- breed of oceanic vermin on the Emperor's Spears' homeworld of Nemeton, with no nutritional value whatsover and a profoundly unpleasant taste.

Sources have conflicted concerning the date of this Chapter's Founding; while some claim the Aurora Chapter to be one of the Ultramarines' Second Founding Chapters, others place the date of its foundation as much later.

Countless millions of indentured menials work the munitorums night and day to feed the mighty guns of the Aurora Chapter's tank companies, ensuring that their weapons need never fall silent.

The Aurora Chapter's Astartes are known to be the undisputed masters of the armoured assault, and the Chapter boasts more Land Raiders and Predators than any other Chapter (or indeed, several Chapters combined).

Their preferred method of battle is therefore, unsurprisingly, a massed attack led by heavily armoured Space Marine battle tanks, a strategy that has earned them renown throughout the Ultima Segmentum and beyond.

The Aurora Chapter's power armour is painted forest green. The Aquila or Imperialis on the chest guard is gold.

A black High Gothic numeral, designating squad number, is stenciled in black in the centre of it.

If promoted to sergeant, a battle-brother displays a red skull on his helm.

The Aurora Chapter's badge is a black, lower case Greek letter Alpha turned on its right side inside a white, twelve-pointed star centred on a field of green. 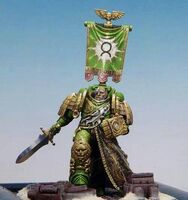 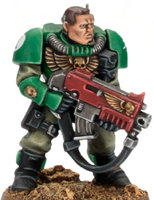 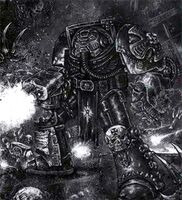