— Aun'Va, Ethereal Supreme, addressing the Fire Caste cadres from atop the ruins of the Agrellan Hive

Aun'Va was the Ethereal Supreme of the Tau Ethereal Caste and Aun'o or head of state of the Tau Empire. He was an almost religious figure of awe for the Tau and was also known as the "Master of the Undying Spirit" to his people. Replacing the aging Aun'wei as the leader of the Tau Empire's Ethereal Council, he was said to be the oldest of the current Ethereals and it is easy to see his effect on the rapid expansion of the Tau Empire. He sat upon the highest councils governing not just each of the Tau Septs but also the entire empire as a whole in his capacity as the Tau head of state or Aun'o. He has counseled the greatest leaders of the Tau for longer than any can recall, and his hand can be seen at work behind much of recent Tau history, particularly the Second and Third Sphere Expansions. He was the most senior Ethereal upon the Tau's homeworld and capital of T'au. His word was heeded by every member of his caste, for his counsel has ever proven wise and true.

But Aun'Va was not merely a spiritual leader, for in Tau history there are many instances of him leading the Tau expansion from the very beginning of their conquests. His presence gave the Fire Caste the will to rid the Si'coa System of the hateful aliens known as the Reek, his words sending them into a righteous rage. Upon the flanks of Mount Scion he pronounced the fate of the Orks of the WAAAGH! Grognik — a sentence that was efficiently enacted by ten thousand Fire Warriors.

Aun'Va stood and died as Supreme Ethereal within the newly won Septs of the Third Sphere Expansion, Commander Shadowsun ever loyal at his side. Across half a dozen new worlds recently brought into the service of the Tau Empire and the Greater Good alike, a million Fire Warriors and many more colonists stood ready to sacrifice all upon a single word of their beloved Ethereal, the Master of the Undying Spirit -- Aun'o'T'au'Acaya'Va'Denta.

After a long rule, the Ethereal Supreme, Aun'Wei, knew it was time for his Last Walk, the ceremony when an ancient member of that secretive caste disappears forever within one of their mysterious temple-domes. Before departing, however, it is tradition that he nominate his successor as head of the Ethereal Council.

So it was that Aun'Va assumed the role of the Great Leader of his people, assuming the title that translates best as 'Master of the Undying Spirit' - or, he that directs the Greater Good. This choice was long ordained, for from his beginning, Aun'Va displayed skills that made him a master of his caste. Even without technological aids, he was able to inspire those nearby to impossible acts or bend their wills to comply with his wishes. When his natural talents were boosted through artificial means, Aun'Va could implant powerful auto-suggestions that would last a lifetime and instill unbreakable loyalty.

It is whispered by others of the High Council, that when Aun'Va asked a question, he would already give the responder the answer. So natural was his skill, so powerful were his methods, that those who agreed with his councils are never sure if it was ever their idea to do so in the first place. In all his long life, there has only been one Tau who was able to defy Aun'Va, and all know that it is best to not mention his name.

Upon waking from cryogenic sleep, O'Shassera was debriefed by Aun'Va alone. Never was the tale of Farsight's betrayal more skillfully told, and the story of his disregard for the Greater Good caused the young Commander to shake with rage. Since that day, Aun'Va has had no further fears for the loyalty of the Fire Caste and has set his concentration fully on the expansion of the Tau Empire.

In his most epic pronouncement to date, Aun'Va declared the beginning of Third Sphere Expansion. Flanked by a full ceremonial guard, Aun'Va gave a slow, deliberate speech, culminating in a rousing call to arms, a demand to proliferate across the stars; an order for them to seize what must be taken. The guiding light of the Greater Good must reach those worlds trapped in the darkness of their barbaric ways. As his words echoed into silence, untold billions of Tau stood outside the council dome, or listened to the broadcast throughout the Empire - all bowed low as one.

Aun'Va praised the works of his people, exhorting each to reach for yet greater heights. He expressed wonder at the latest Earth Caste inventions and applauded the Water Caste, noting the alien diplomats neatly arrayed in attendance. To the Air Caste, Aun'Va dedicated a moment of reflection for their contributions, and for the Fire caste, the ancient being rose off his hover-dais and offered the old Hunter salute - a deed no Fire Warrior could witness and remain unmoved. He even offered advice to his caste-brethren, the Ethereals, saying that the only way to lead was from the front. The barbaric races of the galaxy were desperate for enlightenment and only the castes combined, working for the Greater Good, could bring it to them. In this way, all castes were motivated as never before.

Aun'Va's next act was to decry the renegade Farsight, naming Commander Shadowsun as the new hero and military leader of the Tau Empire. She would lead the Third Sphere Expansion, but the elderly Ethereal vowed that she would not lead alone, for he himself would lend his council, personally heading to the forefront to guide her and the largest armies ever assembled by the Tau Empire. Then, before departing, Aun'Va spoke one last time, reminding every listener that personal sacrifice for the Greater Good of the Empire was required from every Tau.

True to his word, during the initial stages of the Third Sphere Expansion, Aun'Va was constantly at the front, heedless of personal danger in his zeal. His presence instilled courage, helping to drive the Fire Warriors ever forward. The other Ethereals of the High Council attempted to dissuade Aun'Va from such risks; however, they realised the futility of their admonishments when the saw the holovid clips that were beamed back to the Empire. Every Tau, whether a worker in a factory complex on the busiest sept world, or an atmosphere engineer converting the air on a barren moon base of a future colony, was required to view such materials. There, they saw the battles of the front line, including Aun'Va on his hover-throne entering a breach in a battered Imperial fortress wall, Aun'Va directing the devastating volleys of a Fire Warrior line, and Aun'Va standing next to the new technological marvel of the XV104 Riptide - piles of recently destroyed enemy tanks in the background. None who saw Aun'Va's noble attempts to persuade the last Human defenders to lay down their arms could help but be impressed. Although the barbarians refused and in the end had to be eradicated, it was still a sight that stirred something in every Tau, triggering a reaction of pride and determination.

Aun'Va knew that to achieve victory he needed commitment from the warriors at the tip of the spear, as well as from every citizen behind them. With the Third Sphere Expansion, the Empire was on a total war standing; a whole realm committed to conquest and control in an overwhelmingly hostile galaxy. The zeitgeist of the people was pivotal, for belief in progress and continued faith in their own superiority would sustain them in the coming years. All across the Tau Empire morale was high, and all castes recognised that with Aun'Va to guide them, they could not fail in their destiny. The Tau would surely bring enlightenment to the galaxy.

Aun'Va eventually met his fate at the hands of a Culexus Assassin, who was sent to the beleaguered Imperial world of Agrellan Prime as a part of an Officio Assassinorum Execution Force, which occurred during the Second Agrellan Campaign. During the campaign, Aun'Va had become trapped in his personal bunker located beneath the ruins of the old hive city due to the Imperial blockade. Somehow the Imperials had learned of the Ethereal Supreme's location and despatched the Culexus Assassin to assassinate the wayward ancient. Slipping into and out of reality, the Culexus was a blur to the Tau and their myriad sensors. It passed undetected, save only for an unsettling feeling that washed out in bow waves before its sinister presence. Fear ran before him, causing all nearby to shudder, and slowing or even freezing Tau AI functions. The shifting spectre of inhumanity neared its target, blasting Fire Warriors, Tau guards and Gun Drones apart with negative psychic streams of its Animus Speculum, or tore them apart at close range. When he finally reached his destination, Aun'Va knew that death had finally come to claim him. Wounded, his mind aflame, the ancient Tau fled for his life as his Honour Guard, knowing they would die, willingly stepped between the flickering ghoul and their master, absorbing the assassin's onslaught. Fleeing to the abandoned hive city above, terror followed at his heels. When Aun'Va's hover drone malfunctioned, damaged from flight or battle, Aun'Va left it, moving as quickly as his ancient limbs allowed. His flight was for naught, as the Culexus Assassin finally caught its prey. The end of the Ethereal Supreme was neither swift nor merciful.

The Tau had never before tasted so deeply from the bitter cup of defeat. The great losses they sustained marked the end of an era and a grim entry into a bloody new age of war. When the Ethereal High Council learned of the Ethereal Supreme's death, they covered it up. Terrible rumours swirled around the Tau Empire, but all fears and doubts were silenced by the announcement that, in a matter of days, Ethereal Supreme Aun'Va would broadcast a speech, his new statement to be beamed across the sept worlds and beyond. It was to be a message of hope and courage, a message to be seen by all children of the Greater Good.

Although protected by his Honour Guard and a force shield that envelops him and his hover-throne, it was not Aun'Va's way to enter the fight directly. Rather, he guided the Fire Warriors through his wisdom and his ability to inspire his followers to seemingly impossible feats. In his august presence, Fire Warriors have been known to unleash more accurate volleys, enabling them to cut down oncoming opposition, shrug off otherwise mortal wounds in order to continue the battle, or hold their position to the bitter end despite overwhelming enemy assaults. 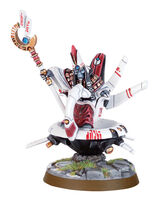 The Ethereal Supreme and Aun'o of the Tau Empire -- Aun'Va in his hover chair
Add a photo to this gallery
Retrieved from "https://warhammer40k.fandom.com/wiki/Aun%27Va?oldid=329871"
Community content is available under CC-BY-SA unless otherwise noted.