The Attack Bike is the most common variant of the Assault Bike and has been used by the Space Marines since the early years of the Great Crusade.

The Attack Bike and Assault Bike were used by both sides in the Imperial civil war known as the Horus Heresy.

In the years following the Heresy, the usage of the Attack Bike by the Traitor Legions, now led by Abaddon the Despoiler, decreased, although they still make use of the standard Assault Bike.

The Attack Bike differs from the standard Assault Bike in that it adds a sidecar to the left-side of the vehicle which is equipped with a heavy weapon such as a Heavy Bolter.

Another Space Marine rides in the sidecar to fire the heavy weapon. The Attack Bike is used as heavy, yet mobile fire-support for Space Marine Bike Squads and infantry squads.

The power and speed of the Attack Bike is so potent that many Space Marine Chapters field entire squads of Attack Bikes in place of Assault Bikes.

The Attack Bike, along with its Assault Bike variant, have been used by the Adeptus Astartes since the dawn of the Imperium. The Space Marine Legions that fought during the Great Crusade maintained deployed entire companies of Attack and Assault Bikes to use for lightning fast attacks on their enemies.

These vehicles were deployed during the Horus Heresy by both Loyalist and Traitor Legions alike. During the Heresy many Bike Squads were used by the Traitor Legions to hunt down Loyalist survivors of the virus-bombing of Istvaan III, and the Drop Site Massacre on Istvaan V.

At the Siege of Terra the White Scars Legion and their expert use of Assault and Attack Bikes helped keep the Traitor Legions from the walls of the Imperial Palace, and after the walls were breached they were successful in capturing the Lion's Gate Starport and denying the Traitors many of their reinforcements as a result.

Following the death of the Arch-traitor Horus, the Traitor Legions made a hasty retreat from Terra into the Eye of Terror, all the while being harried from world to world by White Scars Bike Squads.

The standard Attack Bike used by the Adeptus Astartes and sometimes by the Chaos Space Marines is armed with Twin-linked Bolters that are attached to the bike's forward armour cowling, fixed to fire in the direction of travel.

The sheer amount of Bolter shells that can be brought to bear at whatever target that might stand in the way is often enough to make the enemy break and run before a Bike has even reached them. The Attack Bike mounts a heavy weapon on the vehicle's sidecar to be used by its passenger. This weapon can be either a Heavy Bolter or a Multi-Melta.

While the Attack Bike itself is only lightly armed and armoured by most Space Marine vehicle standards, the vehicle's real firepower comes from its riders, who are always equipped with Frag Grenades, and can also employ Krak Grenades.

The riders are usually also equipped with a Bolt Pistol and a Chainsword, and can optionally make use of Flamers, Meltaguns, Grav-Guns and Plasma Guns.

During the Great Crusade and Horus Heresy eras of the late 30th and early 31st Millennia, Attack Bikes could be equipped with weapons that are no longer commonly used by the Adeptus Astartes in the late 41st Millennium, such as an Autocannon that replaced the vehicle's standard Heavy Bolter.

Each Biker in a Space Marine Bike Squad is armed and equipped with:

An Attack Bike may replace its side car-mounted Heavy Bolter with the following:

Notable Users of the Attack Bike

The Assault Bike has been in use by the Adeptus Astartes since the Great Crusade, and the Traitor Legions took theirs with them after the Horus Heresy. In the 41st Millennium most, if not all, Space Marine Chapters make use of the Assault Bike in some fashion or another. Below are some of the more notable users of the Assault Bike:

Technical specifications for this vehicle have not been released by the Adeptus Mechanicus.

An Attack Bike of the Dark Angels 2nd Company, the Ravenwing armed with a Multi-Melta

An Attack Bike of the Ultramarines armed with a Heavy Bolter 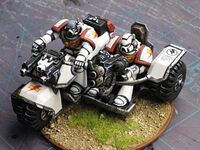 Retrieved from "https://warhammer40k.fandom.com/wiki/Attack_Bike?oldid=351917"
Community content is available under CC-BY-SA unless otherwise noted.