Warhammer 40k Wiki
Register
Don't have an account?
Sign In
Advertisement
in: A, Imperial Tanks, Imperial Vehicles,
and 6 more
English

The Astraeus, formally the Astraeus Super-Heavy Tank, is a massive, super-heavy grav-tank utilised exclusively by the Primaris Space Marines. Just as these new transhuman warriors represent the pinnacle of the Adeptus Astartes' capabilities, the Astraeus super-heavy tank embodies the apex of Imperial engineering, a devastating war machine that serves as the perfect accompaniment for any Primaris Astartes force.

The Astraeus uses similar anti-grav plate technology as the Repulsor transport also used by the Primaris Space Marines, but on a far grander scale. The enhanced repulsor plates of the Astraeus provide a stable firing platform for the tank's temperamental weapons, which also allow the vehicle to advance inexorably over hostile terrain.

The vehicles' thick armour and additional protection from its on-board layered Void Shields allow it to shrug off even the most devastating of weapon strikes. The Astraeus is a symbol of the Imperium's might, unbowed by the dawning of a bloody new millennium and unbroken by the onslaught of its foes.

For millennia Mankind had lost the secrets to constructing anti-gravity devices, which only a few relics from the Dark Age of Technology remaining. It was the discovery of an ancient STC by the famed Arkhan Land that led to a breakthrough in rediscovering and restoring this potent technology to the Imperium during the Great Crusade.

The ancient Mechanicum and its Adeptus Mechanicus successor was able to once more produce anti-gravitic generators and impeller units that -- while nowhere near as elegant or refined as those heretical technologies used by certain xenos species like the Aeldari -- were robust, reliable and could be adapted for use on a variety of hulls, from light reconnaissance craft like the Land Speeder right up to the Astraeus super-heavy grav tank.

After the opening of the Great Rift, with the direct sanction of both Roboute Guilliman as Lord Commander of the Imperium and the Fabricator-General of Mars, a select handful of chosen Tech-priests like Archmagos Dominus Belisarius Cawl continued research and development into new gravitic battle tanks with which to bolster the battle lines of the Adeptus Astartes.

The Astraeus Super-Heavy Tank was developed for use by the Primaris Space Marines, however, the vehicle's design does not originate directly from the work of Archmagos Dominus Belisarius Cawl's Repulsor transport, but instead blends his innovations with Standard Template Construct (STC) technology already in possession by the Imperium.

The STC technology in question was allegedly recovered by the Minotaurs Chapter during the so-called Perun Cross Incident, a battle whose records are sealed to all but the highest echelons of the Inquisition. As such, the production of the Astraeus is focused among the more distant Forge Worlds, primarily the fortress-forge of Mezoa, where the gaze of Mars cannot so easily pry.

The Astraeus possesses an enormous hull which mounts a devastating range of defensive and offensive systems. The main weapons of the Astraeus super-heavy tank are a set of turret-mounted twin-linked Macro-Accelerator Cannons, coupled with sponson-mounted Las-Rippers or Plasma Eradicators. The Macro-Accelerator Cannons are particularly powerful, but the tank also possesses a co-axial, turret-mounted Ironhail Heavy Stubber and a set of hull-mounted, twin-linked Heavy Bolters or Lascannons positioned on the front of the vehicle.

The Astraeus is protected by layered Void Shields and is held aloft by powerful anti-gravitic generators, which are powerful deterrents to enemy assault units. Unlike its smaller counterpart, the Repulsor, the Astraeus does not have any Astartes transport capacity -- instead, this colossal machine is dedicated to destruction alone.

While there are few targets that can stand up to one of the Astraeus super-heavy tank's furious fusillades, it particularly excels at shooting down aircraft. This war machine can fire on the move, or even when locked in close combat, making it a surprisingly flexible and mobile unit despite its great size. The Astraeus is also outfitted with a pintle-mounted Storm Bolter, which can be replaced with an additional Ironhail Heavy Stubber atop the vehicle's turret.

A standard Astraeus Super-Heavy Tank is armed and equipped with:

An Astraeus may replace its hull-mounted twin-linked Heavy Bolters with:

An Astraeus may replace its Pintle-mounted Storm Bolter with:

The technical specifications of the Astraeus Super-Heavy Tank have not yet been made available by the Adeptus Mechanicus.

An Astraeus of the Ultramarines Chapter providing heavy fire support for a Primaris Space Marines squad.

An Astraeus of the Red Scorpions Chapter

An Astraeus of the Red Scorpions Chapter, dorsal-view

An Astraeus of the Red Scorpions Chapter, left-side view

An Astraeus of the Red Scorpions Chapter, rear-view 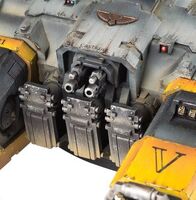 The hull-mounted set of twin-linked Heavy Bolters deployed on the Astraeus. 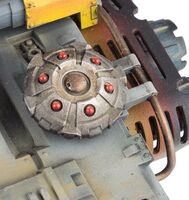 One of the Astraeus' Void Shield projectors 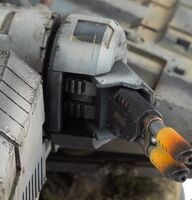 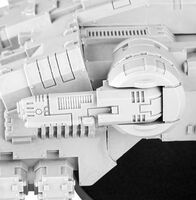 One of the Astraeus' sponson-mounted Plasma Eradicators 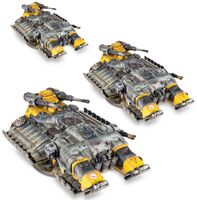