Warhammer 40k Wiki
Register
Don't have an account?
Sign In
Advertisement
in: A, Chaos, Chaos Space Marines,
and 5 more
English

The Ashen Circle was a unique formation of the Word Bearers Legion utilised during the Great Crusade and Horus Heresy eras during the 30th and early 31st Millennia. Descending from the sky on Jump Packs, they were the the destroyers of false gods, ashen angels sent to reduce libraries and shrines to cinders with Flamers and, where a truly lasting destruction was required, Phosphex. Attached to the Legion's various Chapter-sized forces but standing as a circle apart, only the most dedicated of Word Bearers could enter the ranks of the Ashen Circle. Many who passed through their ranks eventually ascended to the role of Chaplain.

Serving alongside the Destroyers of the Word Bearers Legion, the Ashen Circle was a unique formation created for a unique purpose: the destruction of heretical culture, learning and faith. These Space Marines were members of the XVIIth Legion's original Iconoclast faction, charged beyond the battlefield with hunting down works of false doctrine and those who purveyed it, consigning both to destruction and eradicating flame. On the battlefield, their task was deemed no less important by their Legion; seeking out those things which gave the foe the heart and courage to fight: charismatic leaders, priests, battle flags and champions. These they singled out, dragged down with the hook-blades of their axe-rakes and destroyed with brutal fervour, often making plunging attacks far in advance of their own lines in order to do so, with no thought as to their own survival. On world after world, the Ashen Circle tore down libraries and churches, parliaments and sepulchres, first so that the Imperial Truth might be set up in their place, but later so that far darker creeds could take root and fester. The Ashen Circle is an organisation that predates the Primarch Lorgar's return to the XVIIth Legion, and as such maintained a unique pattern of heraldry that was distinct even within such a diverse Legion as the XVIIth. By the time the Word Bearers revealed their treacherous intentions at the Battle of Calth during the Horus Heresy, few elements of the Ashen Circle's original heraldry remained, with only a modified Destroyer icon somewhere on their armour and the dark, gun-metal grey colour of their battle-plate now unobscured by the Colchisian symbology. Instead, they now wore the trappings of Lorgar's new creed in service to Chaos. 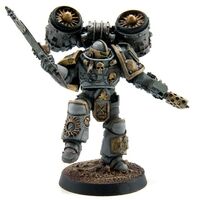 An Ashen Circle Iconoclast leads his Incendiary warriors into battle

A pair of Ashen Circle warriors descend upon their foe

A squad of Ashen Circle warriors descend upon the battlefield