The Arvus Lighter is a small, general purpose cargo shuttle that is widely used by the Imperium of Man for many tasks, both in space and on the surface of planets. The Arvus is commonly used by both Imperial Navy warships and Imperial merchant vessels, including Rogue Traders. The Arvus is just one of many types of small, void-capable shuttles used by the Imperium. The Arvus is piloted by a single pilot, and is not equipped with any weapon systems, in fact, the Arvus possesses only the most basic navigation equipment, external sensors, and proximity alarms. The Arvus has a powerful engine that allows it to carry heavy cargo to and from a planet's surface. {C}

{C}The Arvus is mostly used as a cargo shuttle, ferrying supplies and sometimes personnel from ship-to-ship and from high orbit to the surface of planets. The Arvus can also be used to transport cargo and personnel already on the planet to different locations on the surface if the terrain is too treacherous. The shuttle can be modified to carry special types of cargo, such as replacing the cargo bay with a fuel tanker or expanding it to carry larger loads. The Arvus can transport up to 12 people in its cargo hold, but any Imperial official of importance will most likely make use of the Aquila Lander instead, as the Arvus is designed as a workhorse and not a luxury craft. The Arvus is not a combat vehicle and was never intended to engage an enemy, although if times are desperate enough the Arvus can be used as a makeshift assault boat for boarding actions during void combat, or as a transport ship during ground engagements. The Arvus has been called the Trojan utility vehicle of the Imperial Navy, as the two vehicles sharing similar roles and uses with their respective arms of the Imperial military forces. The Arvus has earned several nicknames such as the "Hog", "Little Pig", and the "Onager", the last stemming from the belief that the the Arvus' Machine Spirit is particularly truculent and stubborn.

Known Users of the Arvus Lighter

The Arvus Lighter is not a combat spacecraft, but it has been pressed into combat on several occasions. When the Arvus is needed for a combat role it can be equipped with an improvised forward-firing Twin-linked Multi-Laser, Twin-linked Autocannon, or 2 Twin-linked Heavy Stubbers. It can also be outfitted with 2 Hellstrike Missiles. The Arvus can receive the following upgrades, including an ejector seat, an armoured cockpit, a flare or chaff launcher, an illumination flare launcher, or a searchlight. 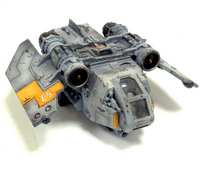 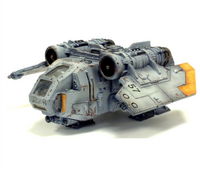 An Arvus Lighter, Front Side View
Add a photo to this gallery
Retrieved from "https://warhammer40k.fandom.com/wiki/Arvus_Lighter?oldid=95193"
Community content is available under CC-BY-SA unless otherwise noted.