The Armoured Supply Carrier, also known as the Armoured Supply Crawler, is a logistics vehicle used by the Chapters of the Adeptus Astartes and other factions of the Imperial military to carry munitions and supplies during prolonged ground campaigns. Although many fighting forces of the 41st Millennium have some sort of air or space-based supply system, there are times when those avenues are not available, whether because of dense terrain features, enemy air superiority, or adverse weather conditions that may prevent such operations. In these situations, ground-based Armored Supply Carriers (ASCs) become necessary to fill the gaps and ferry vital supplies. There are a wide variety of ASCs used by the Imperium of Man, and by various other human and xenos factions. These vehicles are specifically designed to ferry important cargo through heavily contested areas when air support is not possible. The vehicle features a variety of Servo-arms and other equipment to help speed up loading and unloading times along with thick, reinforced armour and a turret-based weapon to ensure that the cargo gets to its destination. Many times these vehicles are crewed by Servitors, although humans or Tech-priests may also accompany them. Many ASCs also possess High-torque Engines for increased speed and traction over rough terrain and Dozer Blades to remove obstacles from the vehicle's path.

The Armoured Supply Carriers used by the Chapters of the Adeptus Astartes are armed with a single set of turret-mounted twin-linked Heavy Bolters and no other weapons, as these vehicles are not meant for combat duty. Current Imperial records do not indicate whether or not the Heavy Bolters can be replaced with alternative weapons, although the similarity between the remote-controlled turret and those found on the Space Marine Razorback may indicate that this is a possibility. It is also unknown, but highly likely, whether or not pintle-mounted weapons such as Storm Bolters can be attached. The Astartes ASC is also equipped with a Dozer Blade, a Searchlight and High-torque Engines.

A standard Armoured Supply Crawler of the Adeptus Astartes is armed and equipped with:

The Armoured Supply Carrier is a vehicle that was scratch-built and featured in an article on the Games Workshop website by Ty Finocchiaro. The vehicle was built using a Rhino and Razorback vehicle kit along with parts from a Sentinel kit and an Imperial Vehicle Equipment sprue. The build guide, shorts bits of lore, and even a playable mission were included.

This is a pseudo-canon vehicle, no mention of Armoured Supply Carriers exist anywhere else, however the idea that logistic vehicles don't exist within the Warhammer 40,000 setting is preposterous, and other logistics vehicles have been mentioned in various canon novels and short stories, such as the Cargo 10 and Cargo 18 and one, the Arvus Lighter, even has a usable model and rules.

The information used in the technical specifications section is taken from the Rhino and Razorback pages. 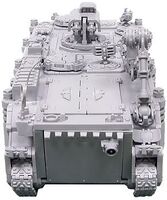 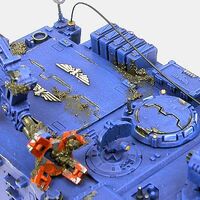 View of the Astartes' ASC's upper rear hatch, this hatch features a servo-arm to lift heavy cargo in and out of the hatch

An Astartes' ASC of the Ultramarines Chapter recovering cargo during a mission
Add a photo to this gallery
Retrieved from "https://warhammer40k.fandom.com/wiki/Armoured_Supply_Carrier?oldid=298447"
Community content is available under CC-BY-SA unless otherwise noted.